Note: I originally wrote this review for the column I was supposed to do at Broken Frontier (and which I did in fact do two entries of). Well, that site has had some problems, the nature of which I probably shouldn't go into (and don't really understand anyway), but the upshot is that two months after I wrote it, this review still hasn't been posted there (nor rejected; they've just sat on it). So I've decided to reclaim it and post it here -- a bit old, but hardly past its sell-by date. Enjoy!

In Nineteenth-Century America, the lecture was a form of entertainment. Many of what we read today as Ralph Waldo Emerson's essays were, in fact, originally lectures he presented on the circuit as a way to make a living; decades later, Mark Twain's first fame came out of lecturing, which he would periodically return to throughout his life. In Twenty-First Century America, however, we are less apt to think of lecturing as a form of entertainment, even though some of its decedents (including stand-up comedy and documentary films) are recognized as such; teachers are even needled to avoid lecturing on the grounds that it's dull.

Bryan Talbot's extraordinary work Alice in Sunderland is subtitled "an entertainment", and, while it certainly is that, its format is basically that of a lecture. To be sure, it is a lecture with various interruptions for stories (more on those in a moment) as well as other diversions. Further, it is presented as a theatrical performance, complete with a curtain, an impolite audience and an intermission; Talbot himself calls it a "variety show". Mostly, though, it's a lecture.

But it's so damn entertaining that it makes you want to spin around with delight. 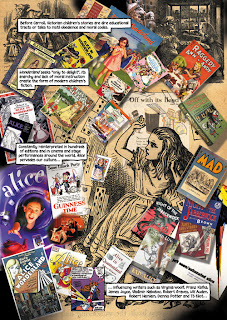 Strange as it is to say about a book so full of fantasy, fancy and imagination as this one, Alice in Sunderland is non-fiction. It's twin topics are those indicated in the title: the Alice books (and it is a sign of their cultural centrality that that phrase is sufficient to identify them), and Talbot's hometown of Sunderland in the north-east of England. These topics, it turns out, are entwined: although Lewis Carroll (né Charles Dodgson) was an Oxford professor who lived at the college during term-time, he spent a great deal of his life in Sunderland, and the multiple Sunderland influences on the Alice books might be said to be thesis of Talbot's book, if such a phrase didn't sound far too linear and dull.

Talbot dances between these two topics -- now tracing out some bit of the history of Sunderland shipping, now exploring the (often deliberately-created) myths that surround Charles Dodgson's life. The organization is associative and playful rather than didactic: an oneiric logic appropriate for a Wonderland-themed tome. Talbot has pointed out on-line that the whimsical surface hides a deeper structure, as later information builds on earlier bits so as to all flow together; and this is indeed true. But to the reader it seems wandering, not marched: Talbot takes us through a wonderland of history and fable, fact and story, bizarre coincidence and grand inevitability. 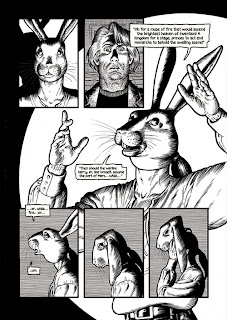 Talbot's art is a delight -- and one of the reasons that Alice in Sunderland never fails to enthrall. He uses a panoply of wildly distinct styles at various points in the book, but two modes are dominant. The frame narrative -- of a narrator/performer speaking to a hall empty save but for a solitary audience member -- is done as black and white drawings, in the traditional pen-and-ink style of comics, with Talbot's individual style familiar from his earlier works from unique projects such as his Tale of One Bad Rat to his work on Neil Gaiman's Sandman and Bill Willingham's Fables. The other dominant style is that of collage. Talbot will take images from a wide variety of sources -- his own drawings, contemporary photographs (often photoshopped), historical photographs, pictures of manuscripts, older art from many sources (above all from Tenniel's Alice illustrations), and many others -- and arrange them into a wonderful new phantasmagoria.

Through these collages walks Talbot's own figure (or, rather, one of them: Talbot has two different cartoon personae who narrate the tale, as well as a third one who makes up its audience), describing what we are seeing, detailing some bit of the history of Alice or Sunderland or something else entirely, drawing connections with what we've seen before or what we know from elsewhere. These lessons are utterly fascinating, the line between story and fact blurring into a mist of fascination: the information that Dodgson's marriage proposal to Alice (if that mythical event occurred at all) was controversial not due to their differences in age but to their differences in class; Sunderland's rise and fall as an industrial town; the Venerable Bede's life in north-east England; Alice Liddell's forbidden romance with the son of Queen Victoria; local legends and fables of all sorts. 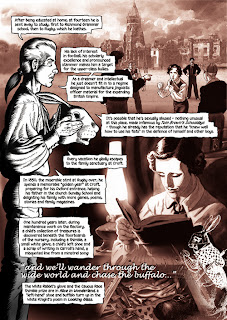 Talbot does not stick rigorously to his theme: like Lewis Carroll's Alice, Talbot's Alice is a book all about play and wonder and delight. He takes time out from his main subjects to trace out all sorts of digressions and byways and stray thoughts. Many of these are presented as separate little short stories. These tend to be drawn in an artistic style distinct from the rest of the work: Talbot illustrates the opening soliloquy from Henry V in cartoon form; he uses pastiches of Hergé and EC horror comics and many other artists both from within the history of comics and otherwise (again, Tenniel is a recurring figure).

Other themes do not gather themselves up into a tight little ball of story, but rather unwind leisurely through the entire work, poking their heads up here and there. The most important of these is the history, and artistic validity, of Talbot's medium: comics. The first three pages of the book are a single image (with different captions), first in rough pencils, then in tight pencils, then inked: the nature of the works as a comic (and the issue of comics' production) thus announces itself as a theme right from the start. Throughout the work Talbot breaks the fourth wall, showing himself creating his book, often expressing doubts about it, before working his way back in: peeling off a mask to reveal a different character beneath, waking from any number of dreams within dreams, or being visited by "the venerable Scott McComics" who brings him the gospel of comics as medium, not genre. (Whether the irony is more pointed or affectionate is an interesting question, although I suspect the latter.) I must admit that Talbot's defensiveness about the artistic worth of comics strikes me as a bit out of date: surely we don't need, in 2007, to argue for the aesthetic worth of comics, or point out that they don't reduce to superheroes? But I admit that it might be I and not Talbot who is mistaken about this one. 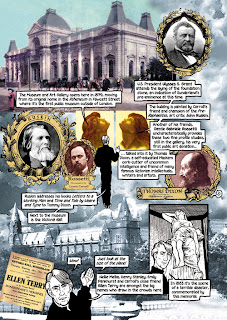 Talbot's use of collage as the central artistic style of his comic is thematically appropriate, for the book itself is a kind of collage, pasting the into the same work the history of comics, the history of the Alice books and the history of Sunderland. To be sure, these go well together, overlapping naturally at many points; that's why the collage works. But these different threads of the work are each larger than their overlap, and are framed by the many other digressions, tales, fantasies, factoids, tidbits, jokes and other entertainments that Talbot pastes into the work atop and alongside his central motifs.

It's a lecture; it's an old-fashioned variety show. But do not be put off. This book has it all: romance and humor, fascinating history and serious moral argument, quirky characters from monks to miners to kings, a persistent ghost and a fight with a dragon. It is a beautiful work of art as well as an entertainment of the highest order. This glorious, overflowing book is unquestionably in the running for best graphic novel of the year. Don't miss it.

(Preview images from here; click through for more. Or just buy the !@#$ book.)