A lot of people are writing about the anniversary today. Although a fair number of other people are simply staying silent (example, and another) -- more than I'd have thought, really. For myself, I don't really have anything to say save to offer the traditional Jewish words about the honored dead, may their memory be for a blessing.

Or, as Bruce Springsteen put it (from the album The Rising, which is my personal candidate for the greatest work of art to come out of 9/11 (a topic I've seen debated all over the place recently)), referring specifically to those rescue workers who rushed "up the stairs -- into the fire":

About the dead I would, typically, say "rest in peace". But somehow, given what has been done in their name in the decade since, the words turn to ashes in my mouth. So I can't even really say that.

May their memory be for a blessing.

-- But here are links to some people who had more to say -- things that have struck me over the past few days leading up to this date. Most of these are via somewhere, but for most of them I forget where; I apologize for the breach of netiquette.)

• Paul Krugman, "The Years of Shame". Another leading candidate. A very brief piece, but one which cuts to the heart of the matter: "The memory of 9/11 has been irrevocably poisoned; it has become an occasion for shame. And in its heart, the nation knows it."

• Krugman's is the best, I think, but here are similar views from Tom Engelhardt, Lawrence Weschler and Cliff Schecter. 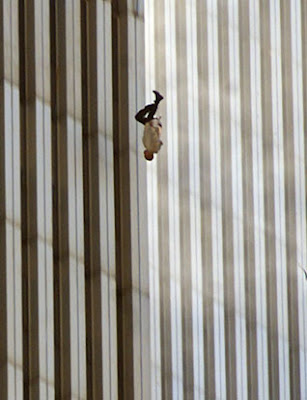 • "Nation Would Rather Think About 9/11 Than Anything From Subsequent 10 Years" -- The Onion, living up to its tagline ("America's finest news source"), as it has so often over the past decade plus (including in the immediate aftermath of 9/11 (via)).

• Speaking of things written in the immediate aftermath (also via), I missed this the first time around: "Why the Bombings Mean That We Must Support My Politics". Snippet:

Of course the World Trade Center attacks are a uniquely tragic event, and it is vital that we never lose sight of the human tragedy involved. But we must also not lose sight of the fact that I am right on every significant moral and political issue, and everybody ought to agree with me.

[P]undits and politicians are trying to do to our memories of that day what those films did to my private Gandalf... the media wants to overwrite our own recollection, our own reactions and considerations, with their carefully packaged interpretations... We are being farmed for our anger, fertilized with the same images over and over again, that we may come ripe on election days and when the pollsters call.

• Jim Henley lays on a refreshing dose of cynicism.

• Amp, in comments, suggests this Noah Millman as an addition to the above.

Lots of interesting stuff to read here. Thanks.