...who, as I noted in the last post, aujourd'hui est morte. (Note on updates: I'm adding to this after posting it. Deal with it.)

* The best mainstream media coverage I've seen of his death, and life, is from the LA times, which has a lot of great articles. (No surprise, perhaps, as it's his hometown paper.) The two photos here are from their photo round-up, for instance. I love this one of him as a child. 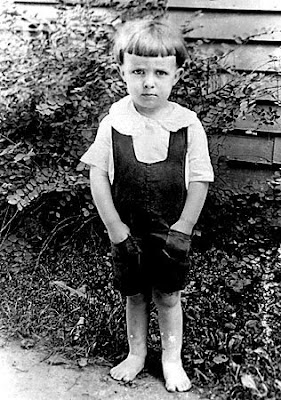 I also like this (oft-told) story of how he wrote (the novella that was expanded into) Fahrenheit 451 at a public library, on typewriters that cost a dime every half-hour to use. The novella took 49 hours to write, apparently.

• The New Yorker has also unlocked, on its site, the two pieces of writing that Bradbury published in that magazine: a mainstream short story from 1947, "I See You Never"; and an essay from its current issue, which just happens to be its (first-ever) science fiction issue.

• This site has (or claims to -- I haven't checked it) a complete list of Bradbury's stories, helpfully organized both by collection and alphabetically, with each listing including all the collections a story is in (Bradbury did a lot of reprinting in multiple places). It does leave out The Martian Chronicles -- presumably because it's a "novel", although it contains a lot of stories. But still, a useful list (and a good supplement to this.)

• I kind of love that Obama made a statement on Bradbury's death. (Oh, I'm cynical enough to know that he's doing it so people will forget about stuff like the fact that he is murdering people (including children) on his sole authority, ignoring one of the gravest crises in human history, and so on. But of course the reason politicians do stuff like this is because it works, so it shouldn't surprise us when it works.) And this is spot on: "For many Americans, the news of Ray Bradbury's death immediately brought to mind images from his work, imprinted in our minds, often from a young age. His gift for storytelling reshaped our culture and expanded our world..."

• I didn't know until reading the obituaries that Bradbury had written a sequel to Dandelion Wine (which I first read in school, yes, eighth grade, at the age of thirteen: although I loved it, and reread it many times myself. (The others -- Fahrenheit 451, The Martian Chronicles, The Illustrated Man, The Golden Apples of the Moon, and on and on -- I read on my own initiative.) There's an interesting review of the sequel, which was titled Farewell Summer, with some information about it's history, here.

* Ta-Nehisi Coates -- who is not only one of the best bloggers on the net but is a SF geek, and so I went to see what he had to say -- hadn't even read Bradbury, but he still managed an amazing post simply by coming up with this astonishing quote from Bradbury's Paris Review Interview:

INTERVIEWER
You seem to have been open to a variety of influences.

BRADBURY
A conglomerate heap of trash, that's what I am. But it burns with a high flame.

Damn. On a related note, Stephen Andrew Hiltner has a terrific post about fact-checking Bradbury's Paris Review interview. (If you don't have the time and the patience for the whole interview, search for "Electrico" and read that little story (it runs the next few paragraphs, until the end -- it's fabulous.)

• Bradbury once met Rachel Bloom. (Her tweet upon his death.) She wasn't the only musician inspired by Bradbury, but so far as I know, she was the only NSFW one. It's funny how her song has now worked itself indelibly into the Bradbury legend.

• All my Bradbury books, I think, are in storage right now -- a lot of my books are, and I read Bradbury mostly decades ago. But just browsing around, looking at titles and tables of contents, bring back so many amazing stories (and not just from The Martian Chronicles, which don't get me wrong is an amazing book, although in my memory other books of his stories, like The Illustrated Man, are even better): "A Sound of Thunder", "The Murderer", "The Wonderful Ice Cream Suit", "Hail and Farewell", "The Town Where No One Got Off", "All of Summer in a Day", "The Long Rain", "There Will Come Soft Rain", "Way in the Middle of the Air", "The Veldt", "Kaleidoscope", "Marionettes, Inc.", "Zero Hour"... there's a lot of amazing stories there. He was a wonderful, wonderful writer.

Time that is intolerant
Of the brave and the innocent,
And indifferent in a week
To a beautiful physique,

Worships language and forgives
Everyone by whom it lives;
Pardons cowardice, conceit,
Lays its honours at their feet.

Time that with this strange excuse
Pardoned Kipling and his views,
And will pardon Paul Claudel,
Pardons him for writing well.

(Auden went on to prove the point that writers needed pardoning for silliness by deleting those stanzas from later editions of the poem.)

• My sense is that the best Bradbury collection is the 1980 retrospective of 100 stories, The Stories of Ray Bradbury (not to be confused with the similarly-structured sequel, Bradbury Stories: 100 of His Most Celebrated Tales, which is actually non-overlapping, I believe.

• In addition to the three quotes on death I pulled from Bradbury's work for my first post (two I remembered, instantly, on hearing the news; the third I came across in finding one of the two, and only remembered then), the Washington Post offers this from Something Wicked This Way Comes:

Death doesn’t exist. It never did, it never will. But we've drawn so many pictures of it, so many years, trying to pin it down, comprehend it, we've got to thinking of it as an entity, strangely alive and greedy. All it is, however, is a stopped watch, a loss, an end, a darkness. Nothing. 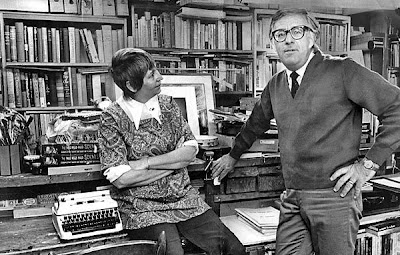