In just under two hours, we're all supposed to set our clocks back one hour, so that it will suddenly and mysteriously be just under one hour from now. Time travel is as easy as the flick of a dial, eh?

If you're wondering why we do this, the go-to person seems to be one Michael Downing, who about sixth months ago (just in time for the previous clock change) published a book called Spring Forward: The Annual Madness of Daylight Saving Time. I haven't read his book yet (it's the middle of the night and for some reason all the bookstores and libraries in Ithaca are closed... maybe we can do something about that, eh?) but reviews of his book which summarize his findings can be found here, here and here. The answer turns out to be rather more of a mess than one would think or than commonly-held theories have it (there's no hard proof it saves energy, the Government did mandate it during WW1 (and WW2) but rescinded those laws once the wars ended, and farmers were the practice's strongest foes). Based on what he says in this radio interview, it sounds like it was tied in with the establishment of standard time (time zones rather than each locale setting time by the sun), which was motivated by the railroads in the late Nineteenth Century but only mandated by the Government during WW1. Somehow daylight savings time got slipped in there. Despite opposition from farmers and others, it had its constituencies (e.g. major league baseball, who liked the extra time for games).

It still seems to be a point of some contention, incidentally. There is an advocacy site here against instituting daylight saving time in Queensland, Australia; and there is a petition here to end it altogether in the U.S. -- or, rather, to end it in half the country and make it permanent in the other half, thereby creating a two-time zone U.S. rather than a four-time zone one. Not quite the same thing I suppose.

Interestingly, Googling around about this I found out that, starting in 2007, Daylight Saving Time has been extended so that it will start on the second Sunday in March and not end until the first Sunday in November. All part of Dick Chaney's glorious energy bill. It was earlier extended (from the last Sunday in April to the first) by Ronald Reagan. Guess those Republicans just love daylight.

And if you follow all those links you, like I, can spend the 'extra' hour from this fall learning about why you have it in the first place.

This idea [standardized time zones] was first advanced and fought for by Sandford Fleming of Canada and Charles F. Dowd of the United States. I mention them chiefly because like so many benefactors of mankind they have been rewarded by total obscurity.

--Isaac Asimov, “The Times of Our Lives” (in Science, Numbers and I)

Labels: Literary, Misc Culture, Things That From a Long Way Off Look Like Flies 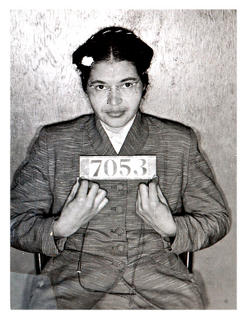 Update (Weds 10/26): Via Facing South, Paul Loeb captures the important way in which Rosa Parks' achievement is misremembered in this country:

[The] familiar rendition of [Rosa Parks'] story... stripped the Montgomery, Ala., boycott of its most important context. Before refusing to give up her bus seat, Parks had spent 12 years helping lead the local NAACP chapter. The summer before, Parks had attended a 10-day training session at Tennessee's labor and civil rights organizing school, the Highlander Center, where she'd met an older generation of civil rights activists and discussed the recent U.S. Supreme Court decision banning ''separate but equal'' schools.
In other words, Parks didn't come out of nowhere. She didn't single- handedly give birth to the civil rights efforts. Instead, she was part of an existing movement for change at a time when success was far from certain. This in no way diminishes the power and historical importance of her refusal to give up her seat. But it does remind us that this tremendously consequential act might never have taken place without the humble and frustrating work that she and others did earlier on. It reminds us that her initial step of getting involved was just as courageous and critical as the fabled moment when she refused to move to the back of the bus.

This is a crucial point, ill-remembered today. The Civil Rights Movement was, above all, the work of local people (to borrow the title of John Dittmer's wonderful book on the subject), not simply famous heroes. Heroism requires preparation, organization, and work. If we remember only the myth of a single act of defiance, we loose the key to what made change possible in the first place. Rosa Parks was a great American hero. But she never would have become that if she hadn't, first, been a dedicated activist working in the trenches; nor would her heroism have had the effects it did without the subsequent mobilization of the entire African American community of Montgomery. We should remember that. (Read Loeb's entire piece. There is also more on this subject in this Daily Kos diary.)

(The myth is important too, of course. Via Pandagon, Sarah Vowell has these thoughts on the misuses of the myth. She read a later version of the piece on the radio show This American Life; you can listen to that here (it's the last ten minutes or so of the show.))
Posted by Stephen at 11:25 PM No comments:

Matt Yglesias hardly needs linkage from me; not only is he one of the stars of the left-leaning blogosphere, but Atrios already linked to this article for Pete's sake (and had some good things to add to it, too, though you should read Matt's piece first). But Matt Ygelsias's latest article in collaboration with Sam Rosenfeld, about the current argument of liberal hawks that the problem with the Iraq war was that it was incompetently executed, is simply superb, and gets at why many of us opposed this !@#$% war in the first place, even knowing full well that Saddam Hussein was a monster.

After slicing & dicing the liberal hawks, Yglesias has George Will for desert here. But eat the main meal first: it's the important bit.

Update: Not that I agree with everything they say; in particular, I'm sure their criteria for when interventions will and won't work can be debated and improved on. Still a must-read though.
Posted by Stephen at 3:35 PM No comments:

My cousin, David Stassen, has started a sports-commentary blog. David's the second member of the family to blog, after me (so far as I know, anyway). You can find his blog here: http://sportsjerk.blogspot.com/. I don't really know anything about sports (save for a bit or two that goes along with studying American history, and isn't really what people talk about when they talk about sports (to paraphrase Raymond Carver)), but if you're interested in that sort of thing I urge you to check it out.

I should have known that there was a sports side to the blogosphere -- it's a huge area of interest for an enormous number of people. But I just never thought about it (despite noticing the occasional sports-related post on other blogs I frequent). It's sort of mind-boggling to think that, for any area of human interest, there's probably a blog or two (if not many more) devoted to it.

(On other matters, light posting is likely to continue for at least another few weeks, alas. Other areas of life are trumping this one at the moment.)
Posted by Stephen at 4:53 PM No comments:

Quote of the Day (A November Guest Arrives Early)

One of my favorite poems has taken on early relevance today, at least here in Cloudy Ithaca. Here it is in full:

My Sorrow, when she’s here with me,
Thinks these dark days of autumn rain
Are beautiful as days can be;
She loves the bare, the withered tree;
She walks the sodden pasture lane.

Her pleasure will not let me stay.
She talks and I am fain to list:
She’s glad the birds are gone away,
She’s glad her simple worsted gray
Is silver now with clinging mist.

The desolate, deserted trees,
The faded earth, the heavy sky,
The beauties she so truly sees,
She thinks I have no eye for these,
And vexes me for reason why.

Not yesterday I learned to know
The love of bare November days
Before the coming of the snow,
But it were vain to tell her so,
And they are better for her praise.