About suffering they were never wrong,
The Old Masters; how well, they understood
Its human position; how it takes place
While someone else is eating or opening a window or just
walking dully along;
How, when the aged are reverently, passionately waiting
For the miraculous birth, there always must be
Children who did not specially want it to happen, skating
On a pond at the edge of the wood:
They never forgot
That even the dreadful martyrdom must run its course
Anyhow in a corner, some untidy spot
Where the dogs go on with their doggy life and the torturer's horse
Scratches its innocent behind on a tree.

In Breughel's Icarus, for instance: how everything turns away
Quite leisurely from the disaster; the ploughman may
Have heard the splash, the forsaken cry,
But for him it was not an important failure; the sun shone
As it had to on the white legs disappearing into the green
Water; and the expensive delicate ship that must have seen
Something amazing, a boy falling out of the sky,
Had somewhere to get to and sailed calmly on.

For some reason, every online text of the poem I saw lacked a capital at the beginning of the final line; having checked the print version in my copies of both Auden's Collected Poems and his Selected Poems, this seems like a repeated mistake. So I fixed it. 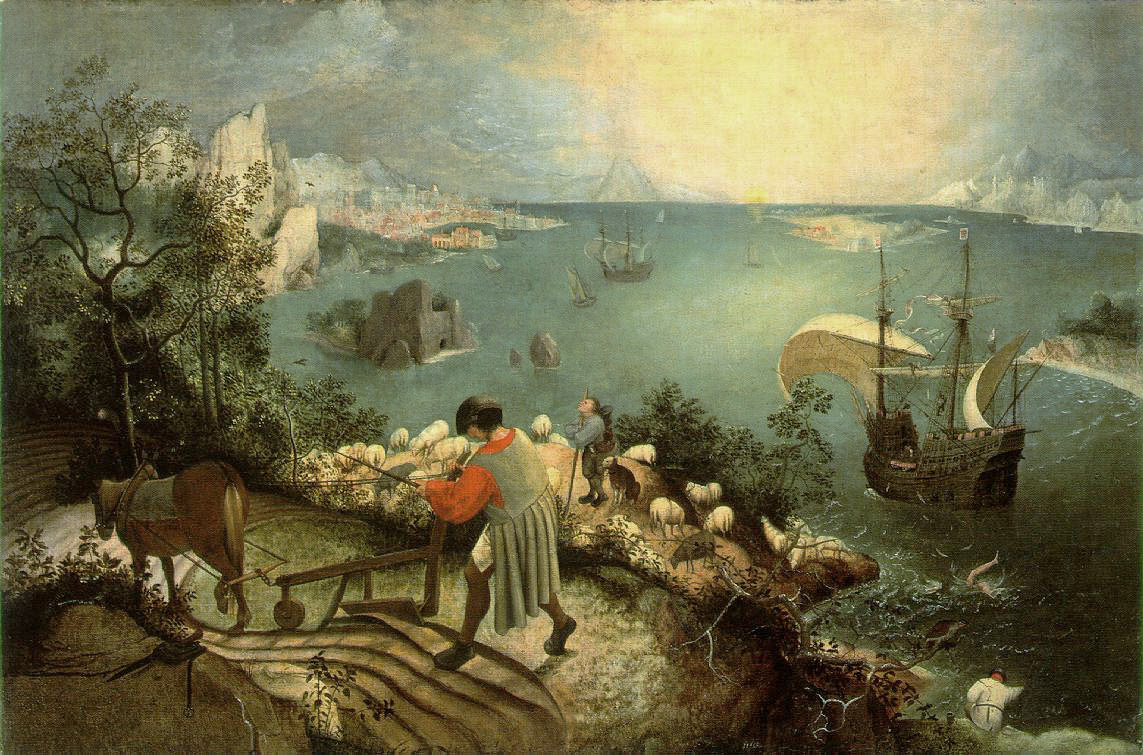 (click for larger version)
(To be honest, I've never liked the painting nearly as much as the poem. But I guess at the end of the day I'm a word person. (Also, I've never seen the original; perhaps it just doesn't come through in the crappy web reproductions.) Interestingly, according to the painting's wikipedia page's reporting of a scholarly article, recent technical analysis indicates that the extant one seems to be a copy of a Bruegel and not the original work.)

A video of Auden himself reading the poem:

A Brief, Idle Thought on the Problem of the Senate

The justifiable frustration that many liberals feel at the filibuster -- which is allowing the remnant of a failed political movement to hobble the implementation of its political successor's agenda (which will then allow them to claim, disingenuously, that the replacement failed and that they ought to be allowed to try again) -- has from time to time spilled over into frustration with the Senate itself. Thus a thoughtful liberal writer like Henrik Hertzberg offered a "prayer" that "the number of Americans who realize that more of our problems stem from structure (especially the Senate, and most especially the filibuster) than from politicians’ lack of moral fiber will reach the cusp of a tipping point" -- identifying the Senate itself, not its rules, as the problem.

Like the frustration with the filibuster, frustration with the Senate as a whole is quite justifiable: the Senate is, as has been oft-noted, a counter-majoritarian institution, added to the constitution for all sorts of reasons that would never pass muster today, in part as a check upon the part of the country that some founders feared might some day try to limit or even abolish slavery. It's a bit of an embarrassment, and there are solid reasons for arguing that it ought to be abolished.

But can it be? Article 5 of the U. S. Constitution, which governs the amendment process, makes the fact that "that no state, without its consent, shall be deprived of its equal suffrage in the Senate" the one (remaining*) unamendable aspect of the Constitution. Now, you could argue that technically no state would be deprived of equal suffrage in the Senate if the Senate were abolished; all states would have equal suffrage in it, i.e. none. It's an argument I doubt would pass muster, however. (It's unclear who would rule on the issue -- the Supreme Court, perhaps, but in what context? -- but whoever did, it's not an argument that would carry much weight.) Now, I've always read that clause as implying that an amendment changing the structure of (or abolishing) the Senate would be valid if it were unanimously ratified by all the states -- but even assuming this is right, it seems impossible in any practical sense.

So the Senate is a permanent part of our Constitution, until the Sun goes nova?

Well, maybe not. Here's a thought.

I don't see why not, legally speaking. (Of course, IANAL.) Presumably a series of amendments could do this. One might take all specialized functions of the senate (e.g. ratification of judges and treaties) and give them instead to the house. Another might ensure that the Senate's vote is a mere formality (e.g. require that, while a majority of the house would be required to pass legislation, any legislation that comes before the Senate can pass with a minority (of 1/3, say), and that they can't decide not to vote on it; alternatively, say that any bill which gets a 60% majority in the house can go to the President with no action by the Senate). A third might redefine the electoral college to give each state the number of votes of its House delegation (with none for the senate). And so forth. That sort of thing.

So here's my question: would this be legal? It would, I suppose, violate the spirit if not the letter of the "unamendable" stipulation -- but not quite as blatantly as simply operating on an "equal in having no suffrage" theory, and it seems that it might well fly. Certainly many sub-parts of such a plan -- e.g. making judges and treaties ratified by the House not the Senate, changing the electoral college, etc. -- are actually quite defensible; perhaps enough of these put together would do the trick.

So could we turn the Senate into the House of Lords?

-- It's an idle thought, of course: passing this would be, practically speaking, nearly as (if not as) difficult as changing the Senate to a simple majoritarian institution, comparable to the House. It would presumably require the states to call a constitutional convention (assuming the Senate is not going to vote itself into being a rubber stamp) for the purpose of amending the constitution in this way, and then get these amendments ratified, etc.

Still, it's an interesting parlor game. Any constitutional scholars in the house who want to weigh in here?

In the meantime, let's get rid of the filibuster, eh?