Since It's Halloween, Here's Something Genuinely Scary

Andrew Meyer loves Big Brother. (via, although this post is better reading.)

(Update: I'd forgotten it, but I bet I got this formulation from here.)

Posted by Stephen at 4:50 PM No comments:

If Obama is looking for an issue where the politics and the substance both point in the same direction it's sitting right in front of him: Iran. In front of everyone's eyes we are creeping toward a catastrophic replay of the mistakes the country made half a decade ago in Iraq. You hear the same arguments -- 'time is not on our side,' etc. All nonsense. Even among the 'sensible' people on this issue the common assumption is that yes, eventually we may need to go to war. But we need to give more time to diplomacy, etc. This is all nonsense and it's a set of shared assumptions that now appears to unite Hillary with all the Republican candidates. At least that's one way to interpret her recent remarks. This is an issue that goes to the heart of America's future role in the world. And it's an issue that could work for him. Or someone, if they'd pick it up and start talking sense.

Between his embrace of anti-gay bigotry (more here) and this whole social security debacle, Obama is continuing to work hard to eliminate any sense that he'd be as good as, well, we all hoped he'd be.

But of course invading Iran would be a disaster of unparalleled proportions (at least in recent history); and Obama was, once upon a time, right on the Iraq war. And it'd be nice to have a !@#$%ing Democrat who was anti-war...

How 'bout it, Obama?

(All links via Atrios, since I've otherwise been off-line all weekend...)
Posted by Stephen at 3:36 PM No comments:

Giuliani versus the Other Racing Republicans

I think that, except for Guiliani, any of the Republicans running -- Romney, McCain, Huckabee, whoever -- would be as bad as Bush has been. (And bear in mind here that Bush has been the worst president in U.S. history.) With different emphases probably -- a smidge better here, a bunch worse there. But overall, equally bad. (Why is a longer topic than I have time for in my current blog slowdown, but I think it has to do with structural forces at play in American politics today, especially on the right, rather than anything about these men as such.)

But Guiliani has the unique distinction that he would be distinctly and clearly far worse than Bush has been.

Hurrah for the home team!

(This has been my annual sports-related post. In other blogging news, my current blogging slowdown, scheduled to last until mid-November, continues. But don't go away for long -- I'll be back before winter (FSM willing.))
Posted by Stephen at 12:10 PM No comments:

(If you're wondering "why is this so important?" then see Glenn Greenwald here and here. His reaction to Dodd's action is here.)

Update, Next Day: Harry Reid, on the other hand, seems like a bought-and-paid-for stooge for the telecom companies, and thereby an accessory to Bush's shredding of the Constitution. Shame on him: shame on any Democrat who helps him.
Posted by Stephen at 7:28 PM No comments:

Yes, we're still in the middle of my mid-autumn blogging slowdown (scheduled to continue through mid-November). But that doesn't mean I can't do an old blogosphere meme: Friday pet-blogging!

So here are a few photos of our lovebirds, Snark & Boojum, (their names are explained here) from this week. 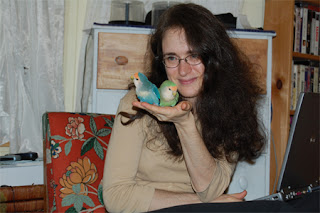 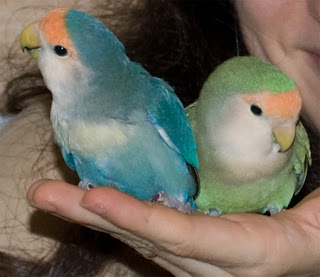 Ready for their close-up 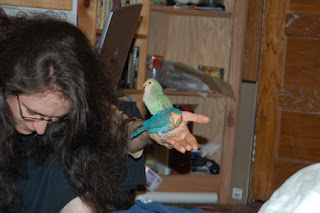 This is the second one of a pair I took, one right
after the other; here they're looking up having
heard the shutter of the first one (and/or seen the flash). 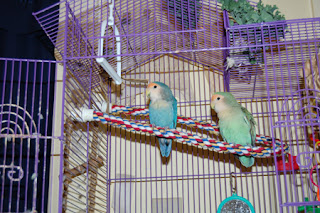 Back inside and ready for a nap.
Oh, and if I have any Ithaca-area readers, remember that the Fall booksale is in mid-swing now: second weekend (of three) begins tomorrow...

Update on a Totally Different Matter: Hooray for Al Gore! Although I still think the world would've been better off if he'd become President after the presidential election he won, rather than having it stolen by his opponent.
Posted by Stephen at 9:15 AM 1 comment:

Is the dancer going clockwise or counter-clockwise?

Make sure to look long enough to get the motion to flip. For me, the default is powerfully counter-clockwise -- that's what I see first, and if I look away and look back, it returns to that -- but I can get it to go the other way if I focus. (Which, according to the article, means I'm left-brained dominant.) Here's what worked for me: try thinking about whether her extended leg is going in front of or behind her balancing one -- and then try imagine it going behind when you had been seeing it in front, and vice-versa. But my wife got it to switch by changing the way she was thinking about it from logical to holistic and back again.

Any way you look at it, it's extremely cool.
Posted by Stephen at 7:15 PM 1 comment:

Department of Things That Just Ain't So

From Cal Thomas's column today: "No Christian who believes the Bible believes in universalism."

Cal Thomas, meet Keith DeRose. You may disagree with his interpretation of the bible (as I disagree with his, and your, metaphysics); but the notion that he isn't a "Christian who believes the Bible" is ridiculous. Also note the links to other writings taking a similar position.

(Link to Cal Thomas via Steve Benen, who talks about some of the other problematic things in this column.)

Afterthought: Incidentally, I don't think the main point of Cal Thomas's column is right either -- among other things, I think he's misrepresenting what Bush said. (I can't believe I'm defending Bush!) I think Bush was just trying to say something akin to what C. S. Lewis says at the beginning of chapter six of Mere Christianity. Two people can believe they're worshiping the same God even while acknowledging they have different ideas about what He's like and what He wants. (The puzzler is, would two atheists say that two theists are worshiping the same God, given that they don't think there is an entity which corresponds to their intentional object. -- That I don't know. Is there a philosopher in the house?)
Posted by Stephen at 7:20 PM No comments:

This Could Get Really !@#$%ing Ugly

Via Tristero, who has more. See also this AP article.
Posted by Stephen at 1:30 PM No comments:

Lots of things on the web are evergreens: just as good a year from now as a year ago. Pieces whose virtue are not bound by historical moment.

So here are ten things I've linked to in the past that are still just as good, just as fresh, just as worth reading (seeing, hearing, whatevering) as they were when I linked to them. If I wrote about them (rather than just including a link in a list), I've linked to my comments too. But for the most part you can just click through -- they're all good.

(My current blog-slowdown, discussed here, is still in effect, and is likely to last into November. Expect normal blogging to resume thereafter.)
Posted by Stephen at 8:23 AM No comments:

"A need to demonstrate their willingness to shed blood"

It's a staple of the Buffyverse, and so many other fantasy/horror/etc genre pieces: a villain needs to kill someone -- often an innocent -- to gain power, to complete some demonic ritual, or simply to get an "in" with the right group.* It's a staple, of course, for the reason that many genre tropes are: it works, and works well, reliably and simply. And it works, of course, because nothing is so powerfully, unmistakably evil as killing someone simply for power or access or ritual. Thus, in drama, it works as a universal code for "evil person".

Well, via Glenn Greenwald's post today, we have this from the New York Times (December 21, 1989):

For George Bush ['41], the United States invasion of Panama early this morning constituted a Presidential initiation rite as well as an attempt to achieve specific goals. For better or for worse, most American leaders since World War II have felt a need to demonstrate their willingness to shed blood to protect or advance what they construe as the national interest... [List of leaders omitted.] All of them acted in the belief that the American political culture required them to show the world promptly that they carried big sticks.

There it is, folks, in the newspaper of record: it is a requirement -- or felt to be a requirement, which amounts to the same thing -- of "American political culture" that Presidents act like the cheapest of horror of villains.

Something to remember next time you hear someone talk about America's goodness, how we run our foreign policy on moral grounds rather than self-interest (or even in addition to self interest), etc. Whereas in fact we require our leaders to be Buffy-style villains... and no one even thinks that it's wrong.

_____________________________
* I was going to cite an example here, but they are endless, from the blood needed to power the ritual at the end of the opening two-parter of Buffy Season one through the initiation ritual of the powerful evil circle at the end of Angel's Season Five. It's simply ubiquitous.
Posted by Stephen at 11:30 AM 6 comments: