Just saw this news. He was a marvelous writer; I've read a great many of his books -- the ones that come first to my mind are his Alice and Snark annotations, but there are so many others -- Aha, Gotcha!, which I read and reread as a child; his other annotations of poems, including "Casey at the Bat"; many collections of his essays; his wonderful book The Whys of a Philosophical Scrivener; and others, too.

Posted by Stephen at 3:21 PM No comments:

Poem of the Day

The Spider and the Ghost of the Fly

Once I loved a spider
When I was born a fly,
A velvet-footed spider
With a gown of rainbow-dye.
She ate my wings and gloated.
She bound me with a hair.
She drove me to her parlor
Above her winding stair.
To educate young spiders
She took me all apart.
My ghost came back to haunt her.
I saw her eat my heart.

-- Vachel Lindsay
Posted by Stephen at 11:17 AM No comments:

Mark Twain Has a New Book Due Out in November

Yes, that Mark Twain; and yes, I'm perfectly serious. Twain wrote an autobiography, with a 100-year embargo on it. 100 years are up.

"I know about the holograms"

“I've never used an ATM, so I don't know what the fees are,” Nelson said, adding that he gets his cash from bank tellers, just not automatic ones. “It's true, I don't know how to use one. But I could learn how to do it just like I've . . . I swipe to get my own gas, buy groceries. I know about the holograms.”

By “holograms,” Nelson clarified that he meant the bar codes on products read by automatic scanners in the checkout lanes at stores such as Lowe's and Menard's.

(Link via Paul Waldman, who has further thoughts on the use of this phrase.) 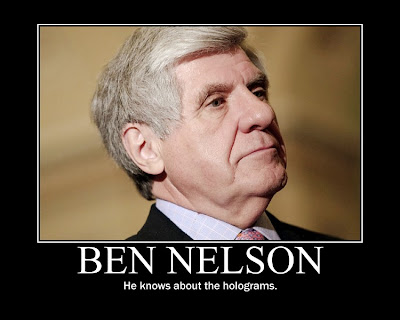 Although Nelson does add something else...

“I go and get my own seating assignment on an airplane,” Nelson said. “I mean, I'm not without some skills. I just haven't had the need to use an ATM.”

Gets his own seat! Good god. And to think I might have underestimated him.

(Image source. Poster made at this site.)
Posted by Stephen at 2:48 PM No comments:

You know what Dennis Kucinish is up to now? He's sponsoring a bill to make it illegal for the President of the United States* to execute American citizens without trial. (link via)

God, the radicalism! He must be a commie. Or a Muslim. Or Jacobin. Or something. I mean, next thing he'll be trying to outlaw indefinite detention without charge or trial at the whim of the executive. Or even torture!

I mean, how un-American can you get? After all, what did Washington, Franklin, Jefferson and Adams stand for if not "assassination, infinite detention and torture"?

What? Someone in the back said something ... "Life, liberty and the pursuit of happiness?" No, I'm pretty sure that was the Communist Manifesto. Or the Koran. Or at least someone French.

_________________________
* For those of you keeping score at home, that'd be Barack Obama, folks. Yes, the "liberal" "democrat". Claiming the powers of assassination of American citizens**. Building on Bush's nice base of indefinite detention and torture for the same. Gotta go for the trifecta, dontcha know.

** I'm tempted to point out that the communist manifesto koran french document saying frenchie things whoever-it-was that wrote "life, liberty and the pursuit of happiness" didn't actually restrict those rights to American citizens. They actually thought they belonged to, y'know, everybody. (Well, ok, all men; the word "women" wasn't added until Stanton's 1848 edit.) I might even imply that the people who pledged their "lives, fortunes and sacred honors" to defend those rights would have gone so far as to claim that the U. S. government shouldn't torture, detain without trial or assassinate anyone.

But nah. That'd be just crazy, right?
Posted by Stephen at 2:08 PM No comments:

What do these things have in common?

There are bibliographies of them listed on Wikipedia.

There are, however, subcategories of bibliographies about Spiderman, the X-Men, Cricket Books & Magazines and Science Publications.

Wikipedia is weird and wonderful.

Disclaimer #1: I can vouch for the quality of none of these bibliographies.

Disclaimer #2: Wikipedia changes constantly, so some of these -- or even the whole !@#$% category page -- may be gone if you actually check.
Posted by Stephen at 4:52 PM No comments: