Quote of the Day: "The Hammer Needs to Come Down"

Rather than letting the market work its magic… or addressing inequality solely through “bottom up” policies… America [] has to start looking at inequality from a different angle: from the top down. The hammer needs to come down on the corporations and the one percenters, hard. We need to crack down on their rent-seeking activities, eliminate the special protections they enjoy via unreasonable patent and intellectual property protections, wipe out their undeserved public subsidies and unfair tax breaks, dramatically increase marginal tax rates, and institute a tax on all forms of wealth. These people have too much money, which gives them too much power, and it is poisoning our society and our political process. The bulk of their money needs to be taken away.

"You can't give evidence if you're stuck with concision"


The U.S. media are alone in that you must meet the condition of "concision" -- you've got to say things between two commercials or in 600 words. And that's a very important fact, because the beauty of concision -- you know, saying a couple of sentences between 2 commercials -- the beauty of that is you can only repeat conventional thoughts. Suppose I get up on Nightline, I'm given whatever it is, two minutes, and I say Qaddafi is a terrorist and Khomeini is a murderer, the Russians invaded Afghanistan, all this sort of stuff -- I don't need any evidence, everybody just nods. On the other hand, suppose you say something that just isn't repeating conventional pieties. Suppose you say something that's the least bit unexpected or controversial. Suppose you say,

At this point the film cuts from one place to another, a series of different statements Chomsky made in different contexts:
Then the cutting stops, and the interview goes on:


You know, people will quite reasonably expect to know what you mean. Why did you say that? I never heard that before. If you said that you better have a reason, you better have some evidence, and in fact you better have a lot of evidence, because that's a pretty startling comment. You can't give evidence if you're stuck with concision. That's the genius of this structural constraint.

I don't believe it's only the US media that does this — at least, not any more, if it ever was.  Importantly, today, it is true of most social media, certainly big ones like facebook and twitter.  Now, there's an important difference, that on facebook & twitter you get microclimates of conventional opinion, which means outrageous statements (to some people) are treated as banalities (to others).  But nevertheless I think the basic problem — "You can't give evidence if you're stuck with concision" — remains: and we are left either nodding our heads at what we agree with (perhaps a particularly nice formulation, perhaps a new instance of a familiar phenomenon or new instantiation of it — this isn't useless at all, but fleshing out what you believe is different from changing your beliefs), or dismissing something as rubbish without giving it a genuine hearing.  Often the same claim will produce both reactions, from different audiences.

It's something other than conversation.  Personally, I find it deeply frustrating.  And to the extent that we are, in fact, more divided than before (an issue I am not sure what I think about), I think this is one of the structural causes.
Posted by Stephen at 12:40 PM 1 comment:

Everything You Need To Know About Internet Comment Sections, In One Picture 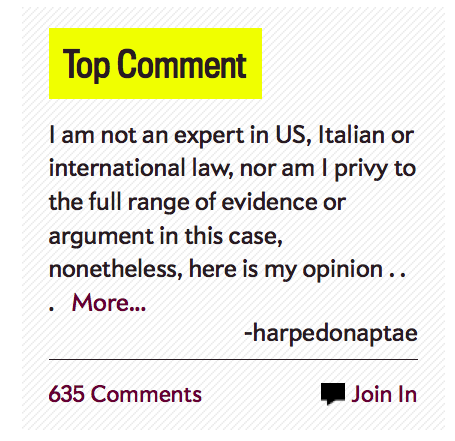 "I could hardly be expected to stultify myself by implying that Joan's history in the world ended unhappily with her execution, instead of beginning there"

Putting together a lecture on Gay Rights in the 1970s (for my class on the history of the US since 1973), I am, of course, including a substantial section on Harvey Milk.  But after talking about his life, his politics, his murder and the immediate aftermath, I go on to talk about how he is remembered.  And in doing so, I am going to explain why with the following quote, which I thought I'd share:


As to the epilogue, I could hardly be expected to stultify myself by implying that Joan's history in the world ended unhappily with her execution, instead of beginning there. It was necessary by hook or crook to shew the canonized Joan as well as the incinerated one; for many a woman has got herself burnt by carelessly whisking a muslin skirt into the drawing-room fireplace, but getting canonized is a different matter, and a more important one. So I am afraid the epilogue must stand.

Sometimes what comes after a life is just as important as the life.

And, for what it's worth, I think Harvey Milk might agree.


If a bullet should enter my brain, let that bullet destroy every closet door.

— Harvey Milk, in a recording "to be played only in the event of my death by assassination," made November 18, 1977, one year and nine days before his assassination.

Posted by Stephen at 9:28 AM No comments: