Quote of the Day

Happiness consists in getting enough sleep. Just that, nothing more.

"How can citizens view the birthday of the country they live in as illegitimate?"

The dean of an Israeli law school, speaking in support of a proposed Israeli law banning the marking of Israel's founding as the "Nakba" (catastrophe) for Palestinians (via Mondoweiss):

I don't see anything wrong with a State that proclaims it is Jewish not giving legitimization to the denial of it being so. Imagine US Jews declaring a day of morning on July 4 - that would be unacceptable. How can citizens view the birthday of the country they live in as illegitimate? People forget where we are living.... The moment the Arab public in the country says the establishment of a Jewish State is a catastrophe, it contradicts not only the Zionist outlook, but also the principles of international law. Just as I don't have the right to defame people in the street, they do not have the right to defame the State.

July 4 as a day of mourning? Whoever could think that? Hmmm...

What, to the American slave, is your 4th of July? I answer; a day that reveals to him, more than all other days in the year, the gross injustice and cruelty to which he is the constant victim. To him, your celebration is a sham; your boasted liberty, an unholy license; your national greatness, swelling vanity; your sounds of rejoicing are empty and heartless; your denunciation of tyrants, brass fronted impudence; your shouts of liberty and equality, hollow mockery; your prayers and hymns, your sermons and thanksgivings, with all your religious parade and solemnity, are, to Him, mere bombast, fraud, deception, impiety, and hypocrisy-a thin veil to cover up crimes which would disgrace a nation of savages. There is not a nation on the earth guilty of practices more shocking and bloody than are the people of the United States, at this very hour.

I guess Frederick Douglass must have forgotten where he was living.
Posted by Stephen at 10:16 PM No comments:

I've been busy with other pursuits... 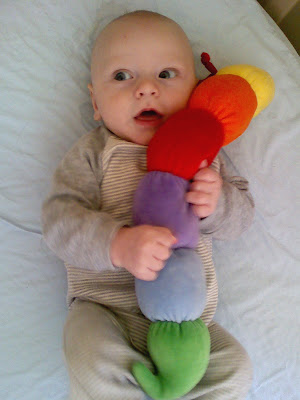 In the meantime, here's Joseph in a bear suit. 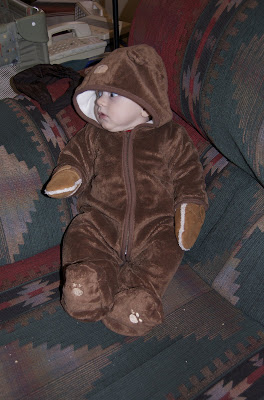 (Just to give you a sense of how this works, this very post was interrupted by some emergency clean-up inspired by the above-pictured bear...)
Posted by Stephen at 7:17 PM 2 comments:

Quote of the Day

There is a fine line between fiction and nonfiction, and I believe Jimmy Buffett and I snorted it in 1976.

Posted by Stephen at 3:24 PM No comments:

Two separate incidents today, combined, tell you pretty much all you need to know about our political system at the moment.

1. The FTC has gotten over 30,000 complaints about those annoying robo-warranty-phone calls (I've gotten two on my cell & 7 on my work number, plus a bunch at home, all in the last few months). These calls violate the "do-not-call" registry; they're also a scam. After 30,000 complaints, the FTC does nothing. Then a senator gets one of the calls, complains -- and the robocalls are shut down at once.

2. Bush, having captured a bunch of people that he couldn't prove guilty in court (unsurprisingly, since at least some of them (that we know of) were innocent; plus his torture program made a lot of evidence inadmissible), set up a system of Military Commissions to try the people (since he just "knew" they were guilty) without all those annoying procedural safeguards that our normal court system has. Obama, having run on a campaign of change, has now instituted... Military Commissions with fewer annoying procedural safeguards than our normal court system has, albeit more than Bush wanted.

So what do we have?

1) 30,000 citizens count for nothing; a senator must complain before a law is enforced (but his complaint is jumped at instantly).

That about sums it up.

Hooray for the great state of Maine!

A few years ago, this would have been front page news. Now it feels like history repeating. And justice slowly seeping up like a rising water table that becomes a mighty and joyous flood.

And, dear New York legislature: if we're not in the top ten, it's gonna be downright embarrassing. So get on it please? Soon?
Posted by Stephen at 8:43 PM 1 comment: