Some Commentary on the Matter of Edward Snowden, from an American Writer

Must the citizen ever for a moment, or in the least degree, resign his conscience to the legislator? Why has every man a conscience, then? I think that we should be men first, and subjects afterward. It is not desirable to cultivate a respect for the law, so much as for the right. The only obligation which I have a right to assume, is to do at any time what I think right. It is truly enough said, that a corporation has no conscience; but a corporation of conscientious men is a corporation with a conscience. Law never made men a whit more just; and, by means of their respect for it, even the well-disposed are daily made the agents of injustice. A common and natural result of an undue respect for law is, that you may see a file of soldiers, colonel, captain, corporal, privates, powder-monkeys and all, marching in admirable order over hill and dale to the wars, against their wills, aye, against their common sense and consciences, which makes it very steep marching indeed, and produces a palpitation of the heart. They have no doubt that it is a damnable business in which they are concerned; they are all peaceably inclined. Now, what are they? Men at all? or small moveable forts and magazines, at the service of some unscrupulous man in power? Visit the Navy Yard, and behold a marine, such a man as an American government can make, or such as it can make a man with its black arts, a mere shadow and reminiscence of humanity, a man laid out alive and standing, and already, as one may say, buried under arms with funeral accompaniments, though it may be
The mass of men serve the State thus, not as men mainly, but as machines, with their bodies. They are the standing army, and the militia, jailers, constables, posse comitatus, &c. In most cases there is no free exercise whatever of the judgment or of the moral sense; but they put themselves on a level with wood and earth and stones; and wooden men can perhaps be manufactured that will serve the purpose as well. Such command no more respect than men of straw, or a lump of dirt. They have the same sort of worth only as horses and dogs. Yet such as these even are commonly esteemed good citizens. Others, as most legislators, politicians, lawyers, ministers, and office-holders, serve the State chiefly with their heads; and, as they rarely make any moral distinctions, they are as likely to serve the devil, without intending it, as God. A very few, as heroes, patriots, martyrs, reformers in the great sense, and men, serve the State with their consciences also, and so necessarily resist it for the most part; and they are commonly treated by it as enemies.

Posted by Stephen at 8:11 PM No comments:

At the Ithaca Festival

I took my son, Joseph, to the Ithaca Festival last weekend. The good folks at the Family Reading Partnership Tent took our picture, and were kind enough to send it to me: 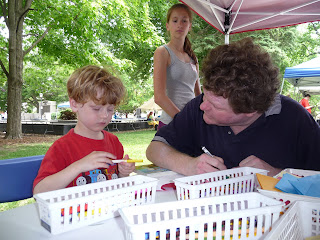 Epigraph to a Grave in Concord, Massachusetts

God wills us free; man wills us slaves.
I will as God wills; God's will be done.

Here lies the body of
JOHN JACK
a native of Africa who died
March 1773, aged about 60 years.

Tho' born in a land of slavery,
He was born free.
Tho' he lived in a land of liberty,
He lived a slave.
Till by his honest, tho' stolen labors,
He acquired the source of slavery,
Which gave him his freedom;
Tho' not long before
Death, the grand tyrant
Gave him his final emancipation,
And set him on a footing with kings.
Tho' a slave to vice,
He practised those virtues
Without which kings are but slaves.

The epigraph above is on a Concord gravestone.  Historian Michael Kammen (my graduate school advisor), notes in his 1972 book People of Paradox that "[i]n the nineteenth century this became the most famous epitaph in America, and was reprinted in English, French, German and Scandinavian newspapers." (p. 193)

The current gravestone is a facsimile of the original; the present copy was erected in 1830.  Here's the picture of the grave from Alfred Sereno Hudson's 1904 book The History of Concord, Massachusetts, Volume 1: Colonial Concord: 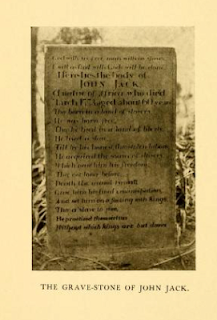 And here's the best contemporary picture I could find of the gravestone: 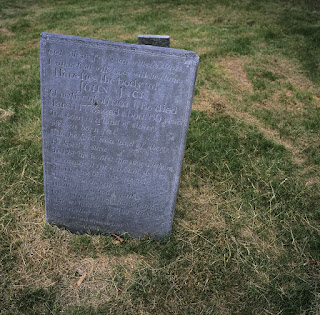 There is a 1902 essay about John Jack, and about Daniel Bliss (the loyalist lawyer who wrote Jack's epigraph) here, online as a free google book.  The grave is on find a grave here.  H/T to Jonathan Holloway for putting me on this trail.
Posted by Stephen at 10:58 AM 2 comments: