It's like that moment on the 9/11 video when the plane is just about to smash into the tower, but paused; or like one of those nightmares where something is coming but you can't run, you're stuck for no discernable reason. Horror beyond imagining is about to erupt, but not quite yet: a slow-motion descent into hell. God help us.

Here is a complete transcript of the 2002 NPR story about the possibility of a hurricane hitting New Orleans which I linked to earlier (via). Here's a picture accompanying the story, showing how high they think the water might go: 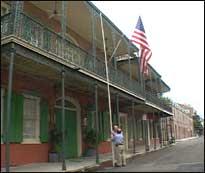 Wunder blog is keeping track of things closely. Another useful dedicated news blog (mostly repostings, it looks like, but seems like a good selection) on Katrina is here.

The New York Times has a beginning of an answer to my question earlier about the Louisiana National Guard:

Many of Louisiana's national guard forces are currently deployed to Iraq, but the general in charge of the Louisiana troops "has 1,500 troops ready to be deployed, with another couple of thousand that they can tap into pretty quickly," Mr. Nagin said in the CNN interview.

CNN is reporting that Katrina has shut down (not may -- has already) 1/3 of U.S. domestic oil production. Prices are likely to soar, at least temporarily.

Maps of the storm's forecast path.

There's an almost apocalyptic warning from the National Weather Service here. Here's the heart of it:

MOST OF THE AREA WILL BE UNINHABITABLE FOR WEEKS...PERHAPS LONGER. AT LEAST ONE HALF OF WELL CONSTRUCTED HOMES WILL HAVE ROOF AND WALL FAILURE. ALL GABLED ROOFS WILL FAIL...LEAVING THOSE HOMES SEVERELY DAMAGED OR DESTROYED.

HIGH RISE OFFICE AND APARTMENT BUILDINGS WILL SWAY DANGEROUSLY...A FEW TO THE POINT OF TOTAL COLLAPSE. ALL WINDOWS WILL BLOW OUT.

AIRBORNE DEBRIS WILL BE WIDESPREAD...AND MAY INCLUDE HEAVY ITEMS SUCH AS HOUSEHOLD APPLIANCES AND EVEN LIGHT VEHICLES. SPORT UTILITY VEHICLES AND LIGHT TRUCKS WILL BE MOVED. THE BLOWN DEBRIS WILL CREATE ADDITIONAL DESTRUCTION. PERSONS...PETS...AND LIVESTOCK EXPOSED TO THE WINDS WILL FACE CERTAIN DEATH IF STRUCK.

POWER OUTAGES WILL LAST FOR WEEKS...AS MOST POWER POLES WILL BE DOWN AND TRANSFORMERS DESTROYED. WATER SHORTAGES WILL MAKE HUMAN SUFFERING INCREDIBLE BY MODERN STANDARDS.