Were you ever a Marvel Zombie?

You know who you are. (If you don't know, then you almost certainly never were.) You read a lot of Marvel comics. It didn't have to be for a long time. But it had to be a lot of them. D.C. doesn't count. Picking up X-Men just because Joss Whedon's writing it doesn't count. But if you know who the Silver Surfer is, if "Juggernaut" makes you think of a big, mutant brother of Professor X rather than whatever ordinary people think of when they hear that word, then this list by Andrew Wheeler, of the 50 Best Marvel Comics Characters, is very, very funny. As Alan David Doane (from whose blog I got the link) said, it's the descriptions that make it worth while. For example:

THE BEAST. Here's the subtle genius of Beast. He looks like a giant, fanged, blue-furred ape creature. But he's actually a brilliant scientist, a great wit and an intellectual. It's awfully clever. He's a reupholstered Teddy Ruxpin that's been loaded with Encarta. On the one hand, he'd make an eloquent dining companion. On the other, he'd make a terrific rug.

...and if that isn't funny to you, then you probably don't know who the Silver Surfer is, and you won't find the rest of the piece funny, either. Don't click the link. For the rest of you...

In other news, I know I haven't posted for a while. It may be a while more. April may be the cruelest month, but for academics with grading, May comes pretty close. I'll be back when I can. In the meantime, here's an image of Fin Fang Foom: 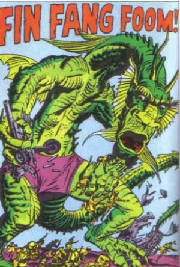 "...he's a giant lizard in purple pants. If you don't understand what makes this great, you probably shouldn't have any contact with superhero comics." -- At least ones not written by Alan Moore. Stick with other types of comics.
Posted by Stephen at 10:52 PM

View my complete profile
* Read my graphic novel, Happenstance:
- in print
- or online
* Attempts has migrated to Substack; read new posts here.
* Stephen Who?
* Hey, is "Saperstein" new?
* Read (or draw!) an old comics script of mine
* Did you change the motto in your header?
* Snark and Boojum Press