So comics genius extraordinaire Scott McCloud is currently on tour to promote his new book, Making Comics. (I previously blogged my initial reaction to McCloud's extraordinary and wonderful new book here.) The tour is designed to hit all fifty states over the course of a year (as of now, he's just two weeks in). I hadn't thought I'd be able to see him, since I figured my state, New York, would just be represented by NYC -- over four hours away. But today McCloud spoke at Syracuse University (his alma mater) which is just over an hour away. That's as good as it gets for those of us who live in the sticks, so I drove up to hear him speak. What follows are my notes & thoughts on the talk.

It was pretty packed. A sign on the door to the auditorium said that it held 299, and I'd say it was 75% - 80% full. Most of the people there looked like undergraduates to me -- I suspect that a class or two came en blanc. (Partly this is because fewer people lined up to get autographs than I expected, so that I suspect many there were new to his work.)

McCloud is an excellent speaker. He's dynamic and funny and personable. (His daughter, Sky, introduced him, but she didn't give her full presentation, alas.) It's a powerpoint presentation but -- just as you'd expect from the author of Understanding Comics -- he uses the powerpoint medium supremely well, with impeccable timing and images that add an enormous amount (indeed, for a talk on a visual medium like comics they're basically essential) but never distract or simply act as filler. (He's particularly good with repeating images as leitmotifs to link various concepts -- just as he does in his various nonfiction comics.)

The talk was in, roughly, three sections. The first was an introduction to his new book, going over (basically) the material from chapter one. Even though I'd just read the book, though, it was still a fascinating presentation: he used somewhat different examples -- and more examples with other people's art -- and explained things slightly differently. The second section of his talk began with the story of his life, segueing into a discussion of his new notion of "the four tribes" (from the third section of chapter six of his new book); again, the examples were fresh, the context different, the whole thing very interesting.

The final section of his talk was -- somewhat to my surprise -- based on his previous nonfiction book, Reinventing Comics, in particular the final section, "The Infinite Canvass". And, once again, prior knowledge of the material didn't lessen its interest. (I think overall McCloud did a wonderful job pitching his talk simultaneously at both those who were familiar with his work and those who weren't -- a tricky balancing act.) At the end of this section, McCloud went through several web comics, talking about them. (He spent the most time on the first, and then (conscious of time limits, I think) sped up as he went along, until the final one, where he slowed down a bit.) I jotted down the ones he used, and they are as follows:
And then he took questions. His younger daughter, Winter, passed around the microphone. I'd say she did an excellent job, but then, I got to ask the first question, so I'm biased (I was sitting right in the front row, next to McCloud's family).

My question was about how he reconciled his talk about web-comics and his obvious ongoing interest in them with the fact that he's currently on tour promoting a dead-tree book, and (according to what he's said on his web site, which he confirmed today) is planning afterwards to write a graphic novel -- again in a dead-tree format. His answer was roughly that, first, he was never saying computer comics should or could replace print, and that each had its virtues;
second, he's spent nearly a decade doing web comics and had done what he set out to do, and felt like a change (and, as I've said before, his web comics are wonderful), and that, third, he was hoping the technology would improve while he did something else. A fair and reasonable answer. I was interested that he didn't mention financial considerations -- my impression is that people still make more of a living from dead trees than from immaterial bites, but I could well be wrong about that. He also made an interesting comment about how art is all about limitations, but he wants to get rid of imaginary limitations -- such as page boarders on a computer screen. An interesting and worthwhile distinction.

After he spoke, he signed books, being quite friendly and gracious as he did so. He gave me some hope that the fourth Zot! collection might even come out some day, although not that much hope.

All in all a fascinating and polished presentation. I'm curious how much his talks differ from time to time -- does he have a single talk he always gives? Does he have a longer selection of material that we saw only part of? Or what? It would also be fascinating to go see him at the end of his year-long tour, and see how the talk has changed over the course of it -- although I doubt I'll get a chance. But I'm delighted I got to see him once. I highly recommend trying to catch his presentation if and when he passes nearby -- whether or not you've read his books. 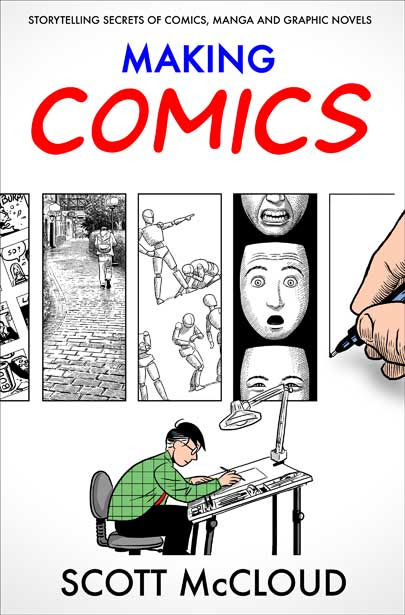 A few other random notes and observations from the talk:

• McCloud made an interesting point early on about (some?) early American comics (early Twentieth Century) being structured like a theatrical performance -- a single angle is held throughout with the action taking place with similar framing. The "camera" doesn't move -- because there was no camera: the metaphor was theater, in particular vaudeville. McCloud also said that many later comics bear traces of this -- he gave as an example a recent issue of Bendis & Bagley's Ultimate Spider-Man (I think that's what it was), pointing out that while the angle changed a lot, all the characters were (more or less) facing the audience; and then he contrasted this with a page of Hergé's Tintin.

• He briefly referred to a "CMYK process" for print comics. I had no idea what he meant, but fortunately Google knows all. Or, to recontextualize one of McCloud's jokes from his talk: We know that's true because it says so on the internet.

• Some of his still images were great. He showed one comic, with word balloons and everything, from the early 17th century (!) -- some anti-Catholic tract called "The True Narrative of Horrid Hellish Popish Plot" or somesuch. Another was a sexual image from a Greek vase (I remember looking at Sky & Winter McCloud sitting next to me and thinking "Hey, there are children here!" -- but I suppose that these days standards have changed, and they are, after all, going to all his talks for a year) of a man trying to have sex with a woman and saying "Hold Still" which (McCloud said) Neil Gaiman claimed was the first-ever use of a word balloon. I remember seeing an almost identical vase at Boston's MFA years ago -- although I remembered it as two men. Did I misremember, or is there some entire sub-genre of "hold still"-erotic vase images from ancient Greek art? (Neither of these two images is online, alas. I guess Google doesn't know absolutely everything. Yet.) (Update: Thanks to Rasselas in comments, the Greek vase -- or, rather, wine cup -- is from the MFA, and is a woman; the image is online here.)

• He had a nice quip, which he ascribed to his daughter Sky, about how humans have error messages -- when the drop something, click the wrong link, or similar goofs. His own was something like "ergh"; Sky, he said, says "meow"; I find that I say "quack" -- I have no idea why, although I've heard at least one other person do it so I know I must have gotten it from somewhere.

• From the Q&A: His depressing message to his comics students: "Being good enough is not good enough." He also made an interesting point about how the internet has, in a few instances, reinvigorated print, causing people to focus on making books beautiful material objects and to really use their materiality as part of their overall effect.

...and that's what I remember. As good a talk as one would expect from as good a comics artist as McCloud: which is high praise indeed. If he speaks near to wherever you are, catch him if you can. And, either way, read his work.

Update: I belatedly see that my friend Michael Burstein went to the Boston version of Scott McCloud's talk. He reports that, based on my write-up, it sounds like more-or-less the same talk that I heard, although he got to hear Sky McCloud's full presentation, and some flying-squirrel joke we missed (drat!)

As you recall, it's a fairly well-known item at the MFA:

Cup interior tondo composition: sex scene: A bearded man bends over a woman with short hair (which may indicate her status as a slave). She braces herself on the stool in front of her which has lion-paw feet and various things piled on top of it, including her clothes. To the left is a couch (kline) which has an elaborately carved post with ionic volutes. An overstuffed striped cushion tops the kline.
Inscription: "the girl is pretty" (HE PAIS KALE) (above their heads), and "Hold still!"(HEXE HESUXOS) (issuing from the man's mouth)