Covering Cerebus, Part Three: In Which the Covers are Used to Illustrate the Books

Part three in a series. Part one is here; part two is here.

For anyone who's read my earlier posts on Cerebus, the reasons to avoid the series should be obvious enough. But the good in it is harder to convey in words: it's one thing to say, 'Oh, it's brilliant', but it's another thing to actually convey that, particularly in a sense that will viscerally convince and not simply cause someone to intellectually accept it.

To do this, we need to actually look at some examples -- which is what I propose to do here. Specifically, I will focus on the covers to the Cerebus comics. I'll do this for several reasons: they're freely available on the net; they're not collected in the phonebooks (with one exception, for reasons we'll get to) so they're probably overlooked by the majority of Cerebus readers who encounter the stories in the collected format; they're good illustrations of at least one aspect of what is attractive about the series: Sim's sense of design and sheer illustrative ability. They also convey hints (if only hints) of his creativity with the medium, his sense of humor and the variety of stories he tells.

So let's take a look at the covers to Cerebus. (Click on any image to see a larger version.)

I said that the early issues of Cerebus were "amateurish" -- perhaps a harsh term, given that I'd sacrifice an aardvark to be able to draw that well. But certainly compared to the skill he would very quickly develop, they look amateurish. And this is on display in spades in the first cover: 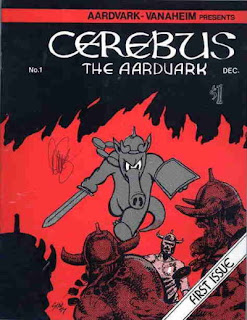 Not only standard as comics covers go, but not particularly well executed at that. Within twelve issues, however, the execution is much improved, even if the result is still very much a standard comics cover: 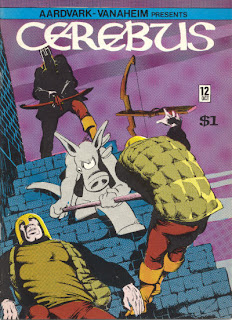 While the cover to issue #1 looks like a poorly-done standard comics cover, the second looks like a reasonably well-done comics cover -- oh, maybe not the Best Cover Ever, but certainly good enough to be intriguing.

By issue #18, however -- not all that far in the run: the issue is still within the first volume (which collects #1 - 25) which I (following in the footsteps of many previous Cerebus fans) previously advised readers to skip if you wish to give the series a try -- things are very different: 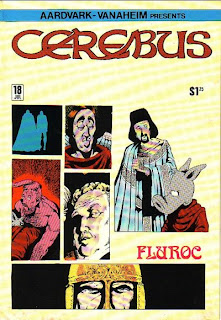 There are still elements of the standard comics cover here, I suppose, but they're already pretty distant. The design is prettier and more interesting; the cover as a whole is much more striking. 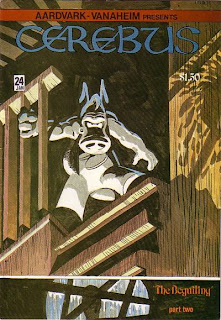 Is in some sense a "standard comics cover" -- an interesting scene with a hint of menace to draw the reader in. But the drawing is very well executed: the angle is interesting; and the inclusion of the small, second scene at the bottom makes the entire thing far richer as an overall design. I like this cover a lot.

Throughout most of the second volume, High Society, which collects the first long storyline (#26 - #50), you get covers that are similar to those in quality and reasonably comparable in style. A few are throwbacks to more "traditional" comics covers; some are distinctly better.

In this series, however, you also start to get something that would quickly become a regular feature of Cerebus covers: short little mini-series of covers which work in relation to each other. These are not series of covers that coincide with longer storylines (Sim does do those eventually, as we'll see later), but rather are series within storylines of covers designed around a similar pattern -- which often add up to more than the sum of their parts, either visually or thematically. (They often match small moments in the larger storyline which stretch across those issues, for example.)

In this case, there are similarly patterned covers to issues #32, 34 & 35 -- covers which have some broader similarities with others in the longer run (the background color, for example), but which have particular elements repeated within just those three. Here are the covers to the four issues from #32 - 35: 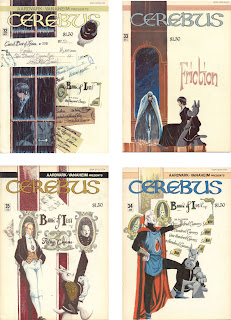 In each case, the image is designed around a strong vertical bar on the left side of the image. Each image shows Cerebus with one other figure from the story; each contains a picture of some of the currency of the city-state of Iest. Note that the cover to issue #33 partially matches the pattern: the color scheme and vertical bar are there, but there are two other characters, not one, and the currency is missing. Overall, it makes a neat series, however.

The way in which some of the patterns, but not all, are continued in other covers from around this point in the series can be seen in the cover to #37: 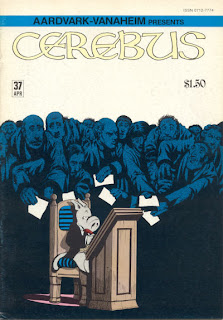 It has a similar color-scheme to the covers from issues #32-35; there is a hint of the left-side vertical bar in Cerebus's chair and podium; but of course the overall design is quite different. The use of the colors -- the light above the dark, with the blue in the middle -- is quite striking; Cerebus's isolation juxtaposed with the thickness of the crowd is as well.

I have nothing particular to say about the cover to issue #43, but I think it's striking: 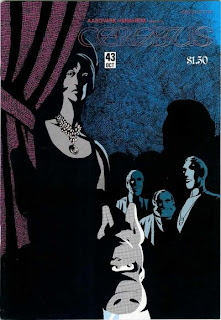 The final few issues of the High Society storyline turn the orientation of the normal comics page 90% from the standard way comics (and most books) are held. (This is hardly unique to Sim -- Alan Moore's done it a bunch of times, for example; I understand why one might do it, for reasons of layout and design, but for no particularly good reason I find it slightly irritating.) The final covers in the storyline, therefore, are likewise turned on their side. Several of them are worthy of note. 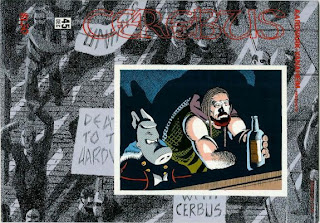 -- is a wonderful use of juxtaposed color, style and tone. The background events (the marchers in the street against Cerebus) is wonderfully juxtaposed to his immediate environs by the use of color and a superimposed panel; the quiet of the color image contrasts with the faded activity of the greyscale background. 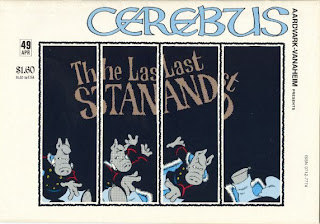 A nice use of panels on the cover, with Cerebus's fall -- a good example of Sim's sheer ability at cartooning, as it is (to me) a very funny fall -- with the lettering of the end of the title similarly tipped in the final panel as he finally topples. 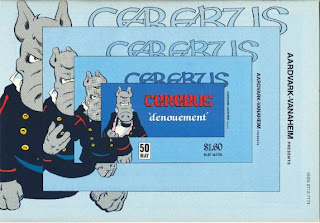 -- seems at first blush to be simply a series of nested images, but look again: it is in fact a comics page, as Cerebus slowly (in what Scott McCloud would call a "moment to moment' transition) undoes his collar, symbolically ending his time in office. The diminishing size of the panels (as opposed to a juxtaposed sequence as in the previous cover) adds to the sense of ending, of diminishment, of failure.

First, the "mini-series" of covers continue, and we get several runs of linked designs. Here are the covers to issues #57-59:

Not only are the background designs, and small-panel-against-design, structures similar, but there are other repeated features, in particular Cerebus staring at the silhouetted hand in both the first two covers -- staring, however, in a very different context at very different hands.

Other "mini-series" include these three covers for intense, one-on-one conversations in issues #74-76. Note the wonderful use of differing in-color close-ups set apart from the two-color backgrounds:

This series of extreme close-ups in issues #94-98, as Cerebus confronts his former advisor in prison: 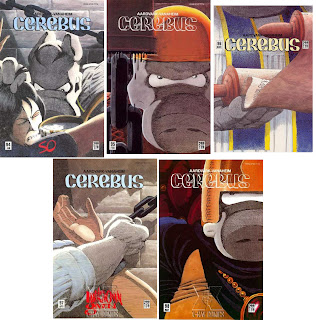 And, perhaps most significantly of all, the longer series at the storyline's end. In these issues Cerebus, on a religious quest, walks on the surface of the moon talking to a prophet (of sorts), and the covers become actual photographs of the lunar surface: 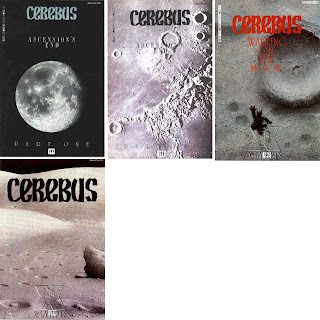 And then, as the religious revelations culminate, transcend even that to become even starker, images, a mix of sheer black, sheer white and stellar photography: 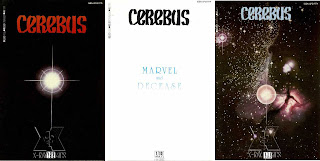 It's not simply that each of these series is attractive and beautiful in its own way; it's not that each wonderfully reflects the turn of the storyline they contain; it's also the sheer variety of the covers -- exploring a whole panoply of ways a comic might illustrate and advertise its contents. I think it's the sheer diversity of the types of images as much as the beauty of any particular image or image sequence that I like the most -- and that best reflects Sim's commitment to experimentation and his mastery of the comics form.

(I have more to say about the covers of "Church and State", as well as following volumes, but since this post is getting long, I will continue it in another installment, now online -- have a look!)

More good stuff, Stephen. I really like art analysis like this. I'm off to read part four!