Just Throwin' It Out There: Chris Ware and John Updike

An analogy just occurred to me, and I thought I would share it with my Noble Readers. This is a sort of off-the-cuff thing, so I might end up retracting it tomorrow. Further, I know the novelist in question largely from his short stories and essays, so I am almost certainly (if not uniquely) unqualified to write about him at all. Taking all that as read --

I think that Chris Ware is to the contemporary comics world as John Updike is to American (prose) fiction. Not only in the sense that each is one of the marquee talents celebrated in their respective media, nor in the sense that each writes closely observed portraits of (often despairing, although far more so in Ware's case than Updike's) daily life.

In both cases, Ware and Updike are utter masters of their mediums on the micro-to-mid levels. Ware draws and colors with grace and clarity and beauty. And Updike is probably the best composer of English-language sentences since Nabokov. Further, each works superbly well on a slightly larger scale: Ware's page design is brilliant, among the best in the medium today; Updike's paragraphs too are graceful and carefully constructed. (Although one place in which the analogy breaks down is that Ware is more experimental than Updike.*) They are both celebrated for these talents -- their undeniable genius in simply drawing superb comics pages, or writing great English prose, respectively.

Here's an example of each, pretty much chosen at random. A paragraph by Updike:

Different things move us. I, David Kern, am always affected -- reassured, nostalgically pleased, even, as a member of my animal species, made proud -- by the sight of bare earth that has been smoothed and packed firm by the passage of human feet. Such spots abound in small towns: the furtive break in the playground fence dignified into a throughoufare, the through of dust underneath each swing, the blurred path worn across a wedge of grass, the anonymous little mound or embankment polished by play and strewn with pebbles like the confetti aftermath of a wedding. Such unconsciously humanized intervals of clay, too humble and common even to have a name, remind me of my childhood, when one communes with dirt down among the legs, as it were, of presiding fatherly presences. The earth is our playmate then, and the call to supper has a piercingly sweet eschatological ring.

And a page by Ware: 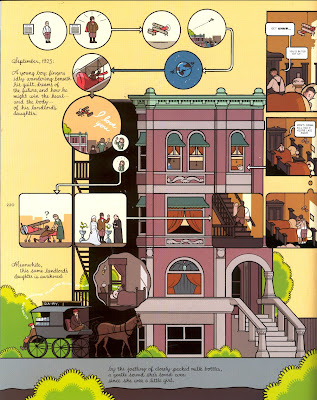 (Page by Ware from The Acme Novelty Library #18; scan from this site. Click for a larger version.)
Brilliant, both, each in their own domain.

But I think both Ware and Updike fail at the larger levels -- character construction, plot, story. Updike, for instance, is a prose writer at the Nabokov level; but does he have any characters who are as powerful as Kinbote, Humbert or Pnin? If so, I haven't encountered them.** Ware designs pages as well as any artist working in comics today; but his overall stories are tales of unremitting bleakness -- a trick that is very difficult to pull off and still be interesting and worth reading. Beckett pulled it off; I don't think Ware does. Neither of them tells a good story, in a way that is occasionally scorned in modernist-influenced high-brow art discourse, but whose virtues, I think, can't be underestimated.

So I will continue to read both Ware and Updike, to learn about the possibilities of comics panel-and-page construction and the marvels of good English prose, respectively. But I usually find myself browsing rather than reading: since the shimmering, masterful surface is the point -- not the structure or the whole, which is usually less than the sum of its parts.

** Even Nicholson Baker, whose fabulous book U and I first got me to read Updike, says that Updike is "our best writer", but not "our best novelist" (he says Iris Murdoch); I think that Updike's deficiency in story and character are what Baker is capturing here (although, granted, he's hardly one to complain on those fronts, having a very similar set of strengths & weaknesses to Updike.)

"Updike, for instance, is a prose writer at the Nabokov level; but does he have any characters who are as powerful as Kinbote, Humbert or Pnin?"

Yeah, I agree pretty much. I find myself liking Ware more in theory than in actual practice, if that makes any sense.

The problem with asserting that Ware is an "undeniable genius" is that one can be proven wrong as soon as someone else comes along to deny it, which I hereby do. You have done a fine job articulating delicate and sophisticated connections between Updike and Ware, but it seems to me that you miss the larger point: that the two are light years apart in quality. Ware's visual vocabulary has nowhere near the depth, richness, intelligence or creativity of the vocabulary found in Updike's books. In my view, and the view of many others, Ware is a hard working but formulaic and uninspired artist. His tedious and tiresome work has been embraced as a substitute for art by a generation with short attention spans, but it is hard to take him seriously. That, for me, is the singlest greatest distinction between Ware and Updile.

Gabe: Hmm. Need to read more of the Rabbit books, obviously. See above re: unqualified.

Zik: The way I'd put it is that I like him in small doses. But I see what you're getting at.

David Apatoff: I actually think that there are cases where something is not proved undeniable by denying it (which has to do with implicit conditions in the use of the former, i.e. the implied sense that it's not rationally (e.g.) deniable)... but this isn't such a case and I withdraw the phrase. I meant something like "to me evident and widely-praised by others."

But obviously you disagree. If you're still reading, I'd be curious, first, who these "many others" are (are there critical reviews? essays? books?), and second, is there a comics artist who you *would* say was as good in the comics medium as Updike is at prose? I'd love to hear some names.

While reading the first half, I was getting to post a comment but then you completely stated it it what I was thinking in the second half.

I would say the Chris ware is definitely a genius, he has an ability to focus that goes far beyond that of most people. As a graphic designer he is easily one of the best in the illustration business. However, the stories that I have read seemed a little clouded down by pointless and uninteresting information and characters. Like if my heart was cracking open in my chest, would I really care about the sound of the stove turning on? This being said, in my own cartooning I rip chris ware off all the time (you'd never know). He's ridiculously inventive when it comes to illustrating stories.
I haven't read Updike, but that paragraph you quoted reads like a hot obsession but it's just about paths. (man-beaten paths I guess) If someone was talking to me like that I would hate them immediately and powerfully. It's like all of those horrible poems you read about some idiot lady's garden. People writing about how a bowl of cherries is a promise that the universe can't keep and shit like that is pointless rambling. The paint isn't the art, it's the picture. The style. The life.

apologies for the pointless rambling

Ware, in turn, has (to my knowledge) no body of work analogous to Updike's extensive criticism, nonfiction and reviews -- where (as Baker says) some of his best prose appears.

The closest analogue I can think of is his work in graphic design. He gets commissions (or volunteers) and does things based on the ideas of others or real events.

Have you read the Imp edition on Ware?

The closest analogue I can think of is his work in graphic design. He gets commissions (or volunteers) and does things based on the ideas of others or real events.

That's not a bad analogue, actually -- probably fits the bill.

As for The Imp: no, I hadn't heard of it! I've read (in) this volume by Dan Raeburn, but the linked piece indicates that it's not the same as the Imp issue, despite the fact that the same guy wrote both. I guess I'll have to track that down, now...