Portrait of a Regional Party?

Based on this Kos post, I made up this map of the post-Specter Senate Republicans: 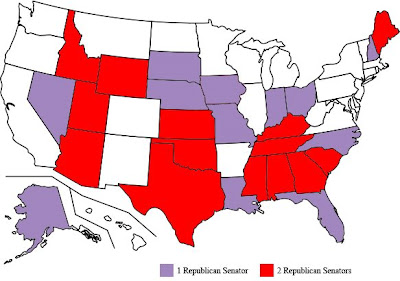 The claim is that this is a regional party, based in the south and the western Mormon corridor.

Maybe I'm just overly pessimistic, or cautious, but I think that's jumping the gun. Sure, those areas are where their strength are. And with only 40 Senators, its not that surprising their strength is somewhat localized. But while they may be becoming a regional party, I think it's overly optimistic to say they are one. (Not to mention that the Democrats have made real inroads back into the South, albeit mostly the upper South.)

That New England Republican remnant sure stands out, though.

Meanwhile, if anyone wants to make a map like this for House districts, I suspect that'd be far more telling... and far more murky (hence my being unwilling to say flatly, yes, they're a regional party.)