Since today is the last day of my second run-through of my class American Studies 100: A History of American Culture in 21 Examples, I thought I'd post the (slightly) revised cover image.  The syllabus (pdf) is pretty much what it was when I taught it in the fall -- the order switched a little bit (often for practical rather than pedagogical considerations), tweaked a few of the readings, but mostly it was the same.  (I didn't change any of my examples.)  But here's the cover image (without accompanying text): 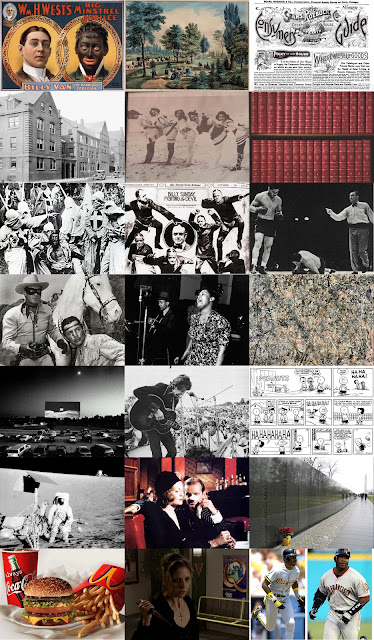 And, just to correlate with the picture, here are the 21 examples which I used to outline the history of American culture:
For more details on the ideas & reasoning behind the class, see this post, or the whole syllabus (pdf).

It was a fun class to teach.  Next year I'm teaching in the history department, rather than American studies, again; but I'd like to teach it again sometime, if I ever get the chance.

Labels: American Studies, Tales Out of School, Things That From a Long Way Off Look Like Flies