(This is a combination of two things I posted on Facebook today.)

As anyone with anyone in the SF field in their social media feed knows by now, the extraordinary editor, David G. Hartwell, is dying. (Contrary to various reports, it seems he is not actually dead; but his wife has reported that he "is not expected to recover", and that he is being tested for brain death.) As best as I can tell, a fall down a flight of stairs triggered brain bleeding which has become fatal to his self if not actually his heartbeat.

There will be a lot more to say, mostly by people better qualified to say it than I. But, like so many in (or on the fringes of) the SF field, I knew him. I was his student in a summer class in 1988. It was a good class; and only years later, having myself been a teacher, can I recognize how extraordinarily above & beyond he went in teaching that class, meeting with us for hours before and after nearly every time. After that I saw him from time to time at SF conventions, once or twice elsewhere. He was a kind and generous man, and it is a shock to imagine him gone from the world.


A shock: it was so sudden, so unexpected. That a man who yesterday was (I believe) seeming in full health can today be on the brink of death is terrifying, and magnifies what is already an incalculable loss.

A note to anyone not acquainted with the SF field (should anyone in that position have read this far): I strongly suspect that David affected your life, too: simply because his affect on the SF field was *so* vast (he was the most influential SF editor in my lifetime), and because SF has had such a prominent role in the culture beyond the field proper (movies, TV, etc), it seems inescapable. I am not myself capable of articulating what that influence is, but it's there, and I hope others will do a better job of tracing it than I.

Finally, I can help noting that David and his wife Kathryn had children who are — I believe — teenagers. As overwhelming a loss as this is to so many in his field, as utterly overwhelming as it must be for Kathryn and his two kids from his first marriage, I can't help but think of them in particular. I know a bit of what it's like to have a parent die suddenly around that age; my heart goes out to them.

Not yet gone, you are already missed, David.

Can't stop thinking about David Hartwell. Most people (rightly) will be talking about his impact on SF, so here are a few links on another subject: his clothes.

Lee Whiteside's photo of David showing his ties at a SF convention (below, with another of his photos further down): 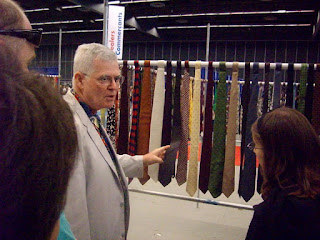 David as Fashion Theorist: his three laws, with corollaries (scroll down a bit).

Mary Robinette Kowal on some of the thinking behind his outfits. 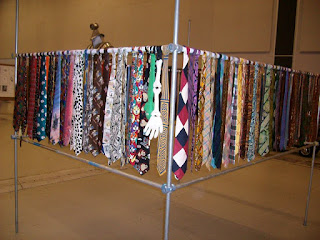 Seeing all this made me quite nostalgic for David all over again. Which is the point, I guess.