99 Ways to Tell a Story is Out Now Too

'Tis the season: I just received my copy of another Oulipian book, Matt Madden's 99 Ways to Tell a Story: Exercises in Style. Actually, this book is not Oulipian but Oubapian: the Oubapo is to comics/graphic novels what the Oulipo is to text-only literature. Oubapo-America is an (unofficial, I believe) spin-off of the French group, and Matt Madden is one of its founders. 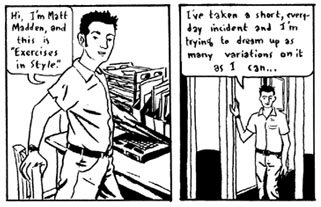 Madden's new book consists of variations on a theme, so it is fitting that it itself is a variation on a theme -- in this case, a theme by Raymond Queneau. Raymond Queneau (years before he co-founded the Oulipo) wrote a book called Exercices de Style. This involved 99 versions of a simple story, transformed in various ways: told in different tenses, different styles, made into a sonnet, told as a lipogram, retold in various slangs, etc. The link above is to a French text -- and I haven't checked systematically, but it looks like it's the entirety of the original book. (Queneau's book was translated into English by Barbara Wright.) Nabokov called it "one of the greatest stories in French literature."

Madden, essentially, did the same thing in comic form: took an incredibly simple tale, and did 99 variations (well, if you count the template) on it. The result is, actually, utterly spectacular. It may sound dull, but it actually makes enthralling reading.

I've actually been familiar with the project for some time. Madden has been posting a rotating series of samples on his web site for a while now. (Click over to get a sense of the project.) And he also included some versions by guest artists. The guest artists versions aren't included in the book, so even if you buy (or have bought) a copy (which you should -- it's just wonderful) you should check them out, because they're terrific too. I like them all, but some of my favorites are those by King, Palm, McKenna, Motley, Tanioc, Trahan (a flash animation!) and, above all, Pierre Menard's, whose contribution is so much better than Madden's original...

Inspired by this, I did a few myself, which Matt (if I may switch to the familiar form) was kind enough to host on his site. You should go read his samples first or mine won't make any sense (besides, they're so much better than mine!), but once you've done that, mine are here: there's one using (my own) photographs for the art, and four others using various images by other people: a cento (which I did before Madden did his own version, so I wasn't just copying him), a version which was also a solution to the Silent Running exercise (which will make no sense to you unless you go look at other people's solutions first); and two which were "reductions" of Madden's own exercises (a time-honored Oulipian technique): one systematically taking the first panel from the first, the second from the second, etc -- a version which was based on the original ordering, now altered, so that the current version is (alas) simply random, and one whimsically choosing some of my favorite panels (although I should emphasize that this was done when I'd only seen about a third of them -- I'd definitely do it differently now!)

So one might say that I am biased in the project's favor. But really I think it simply means I loved it based only a small sample -- loved it enough to try my hand at it (albeit in a small way). Nothing biased me towards it before I saw the site for the first time! It's just that I had already been won over before it was printed on dead trees.

Other people who have reviewed it have liked it too. All the reviews I've seen have been positive. (Although it occurs to me that if you're the sort of person who will read the book at all, you'll like it -- it's very well done -- while anyone who wouldn't like this sort of book just won't read (and therefore, hopefully, review) it.) Anyway, reviews have been published by the Complete Review and Derik Badman. Interviews with Madden can be found at MadInkBeard and Bookslut.

Oulipo has, by now, developed a small cannon of books written by its members, inspired by its method or simply in sympathy with its style. And there are a few acknowledged masterpieces among them -- of which the first, I think, was Queneau's Exercises in Style. Oubapo, to this point, has published far fewer books -- there are four official anthologies, and that's about it. (Its members have done many, but fairly few, so far as I know, have been deliberately done according to Oubapian techniques -- though there are a few, of course). This should all be taken with a lot of salt, since my French is pretty rudimentary, and it may well be that there's a lot of good stuff that hasn't been translated into English, or even sold on this side of the pond. (Update: And in fact I did some word-eating on this point here.) Nevertheless, I would make a distinction between collective anthologies and single works; and, given that, I think it's fair to say that -- so far as I know, and certainly in English -- Matt Madden has produced the first Oubapian masterpiece, the first book where the Oubapo can really strut its stuff in the way that the Oulipo has in a number of volumes. It's an extraordinary book, and everyone with any interest in comics, style, constraint or, hell, just sheer artistic playfulness should check it out. 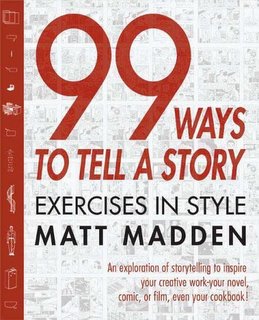 One minor downside: I do think the decision to sell 99 Ways as, essentially, a writing textbook was... unfortunate. I can't blame the publisher: if that's how they think it will sell, then it makes sense for them to sell it that way, I guess. But it doesn't seem to me to be the book's strongest point -- and it means that other aspects will be overlooked. I suppose I'm just lamenting that that is how they thought the book would sell.

So far, in fact, everyone seems to share this lament. Ninth Art says* that "the cover... is so bland it could belong to a maths textbook. It barely hints at the fun of Madden's creation, and certainly wouldn't be the sort of thing that would urge me to pick up the title." Matt Chaney says that 99 Ways "has a strange blurb on the cover that makes it sound like some sort of touchy-feely how-to book... Well, maybe -- it certainly shows that there are no limits on how many ways a story can be conceived and structured, and that each choice changes the emphasis and effect. But there's much more here than a guide to digesting the artist within..." The Complete Review put the point this way:

It also has an off-putting cover -- all the more so with the odd sales-pitch on the front cover, advertising it as: "An exploration of storytelling that will amuse and delight you, and inspire your own creative work -- your novel, your comic, even your film." ... There might be something to this... but certainly this isn't anywhere near the top of the list of aspects of this book that make it so commendable. But you can't really blame the publisher: selling it as a graphic version of a Queneau idea certainly won't attract the mass of book buyers -- but selling it like this, indeed, possibly even stocking it in the self-help section (or at least the writers/artists/filmmakers how-to section) will certainly make for better sales. It goes for (almost) all books, but even more so for this one: don't judge it by its cover -- or the publicity material.

Anyway, while this lament is widespread, it also is -- when push comes to shove -- unimportant. What's inside is what matters. It's a pity, but c'est la publishing business, I suppose. Don't let it put you off.

* In the spirit of honesty, Ninth Art also says the only other negative thing I've seen anyone say about the book, which is that Madden's art isn't always up to the project. (I disagree, but didn't want you think I'm hiding anything...) 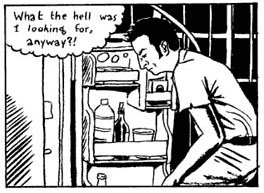