One of the tiresome tasks for left-leaning political activists in the next few years (particularly in 2007 & 2008) will be battling the mythology that McCain has built up around himself as a maverick, an honest man, the type of Republican who might do a good job governing. As the disaster that has been the Bush administration becomes ever-more apparent, a lot of conservatives will (indeed, many already are) crying "Do-over!" They'll say that Bush wasn't really a conservative (true in a sense, but he is a fairly good representative of today's conservative movement, so it's not true in any sense that matters much in practical political terms); and try to push McCain forward as a substitute -- basically trying to undo the mistake that they made in letting Bush slime his way to his 2000 primary victory in South Carolina (and, hence, the nation).

Now, I don't want to push this point too far: McCain would certainly have been better than Bush. But he is a slightly spruced-up version of an essentially destructive thing, a movement conservative politician; and he will be bad, too. "Not quite as bad" simply should not be the reining standard here. Sure, McCain is doing very good work these days opposing making torture official U.S. policy (which shows how low we've gotten), and probably would have run the Iraq war more competently and perhaps even sold it in a less mendacious fashion. But he still would have invaded -- the primary mistake here. And it is important to remember that on literally thousands of other issues, Bush has been terrible -- and on many McCain would have been more or less the same, and on most he would have been almost even if not quite as bad.

Most of all, however, we need to work on combating McCain's undeserved reputation for honesty and straight-shooting. (Never forget that Bush got himself that reputation for long enough to win two elections with it.) McCain destroyed -- or should have destroyed -- that reputation in 2004 when he supported Bush. There was, simply, not honest way to do that (unless one was an open theocrat, or an open give-money-to-the-rich-and- the-rest-of-us-go-to-hell proponent). Bush's destructive policies, his murderous incompetence, his fundamental mendacity, were all clear by then. To support him was to support them. To talk endlessly about how terribly the war in Iraq was being run, and then go on to support Bush as if none of those things were true (and to oppose Kerry who -- never forget -- was promising a more competently run war, not an end to it) was to put political partisanship (and, in McCain's case, political ambition) ahead of any notion of what was good for the country. (The point here is not merely that he supported Bush, but that he supported Bush with full knowledge of the damage Bush was doing to the country. The former was merely stupid or crazy; the latter is what is malevolent.)

It was unforgivable. And it should not be forgiven.

(Not that his support for Bush was the only evidence of his willingness to be just another dishonest politician. There's plenty of other evidence for it. But with the disaster he supported running (and ruining) the country, it is perhaps the most pertinent point.)

All this by way of introducing the following version of what I've been saying here, which is from a long, impassioned and righteous (if rather rambling) blog post (via):

Yes, there is a difference between the McCain/Hagel Repubs and the neo-con/White House Iraq Group lunatics. But it's also good to remember: no matter what he does from here on out, McCain stood by the president, a man (and his machine) who smeared him viciously on the 2000 campaign trail, and then, at the GOP convention four years later, campaigned for him when we were well on to this disastrous course. And thinking men -- of which McCain is surely one -- knew the neo-cons were exploiting 9/11 for their hideous misadventure in Iraq, and knew this was an administration that would not allow photos of the dead. Etc. etc. etc. Every man who stood by Bush should be forced to answer for it.

Amen! Well-spoken. And the fact that the blogger who wrote those words was John Cusack -- yes, I mean that it was that John Cusack -- is, really, just icing on the cake. 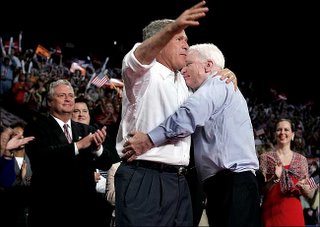 I'd say that Mac is worse than Bush Light in some ways.

He actually would try to ram through the budget cuts that Bush just talks about, for example.