In thinking about the politics of Israel/Palestine, I've come around to the side of the angels -- that is, the angels who fear to tread where fools rush in: best to talk about other things, where I have some hope of shedding some light, and some hope of avoiding much heat.

But on hearing of Hamas's electoral victory, I thought of Harvey Pekar's characteristically understated reaction to the news of 9/11: 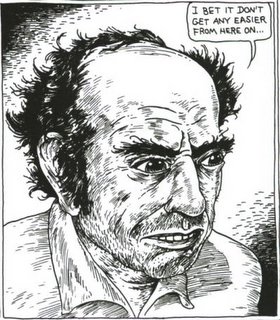 (Art by Tony Millionaire; from the book 9-11 Emergency Relief.)

I don't feel certain of anything in this area -- not even of my overwhelming sense that this cannot be good. So I won't say much else. But here are a few perspectives that I found interesting to read today; no other endorsement of their views is implied.

• Abu Aardvark advises caution. (via)
• Patrick Belton, who is currently reporting from the West Bank (and whose blog is probably a good one to watch), says that Hanan Ashrawi told him that she "thought Hamas would bring the West Bank and Gaza into theocracy."
• Yossi Klein Halevi says that this means that the Palestinians have rejected the notion of peace entirely.
• Ali Abunimah sees this as Palestinian rejection of an unjust, Israeli & American-imposed settlement.
• Andrew Sullivan says Hamas's victory "represents one critical pillar beneath the Bush foreign policy crumbling into dust". (Update: Ezra Klein adds that Sullivan "doesn't quite mention that [hispoint] applies primarily to the writings of Andrew Sullivan.")
• Eric Alterman says that this shows that "things can always get worse", and dwells on dismal ironies.
• The Head Heeb offers a number of thoughts. (via)

More links if/as I see any. If anyone here has any to share, feel free to leave them in comments.