Books & Cartoons to Watch out For

One of my favorite cartoonists (which, granted, is a long list) is Alison Bechdel. Her major work up to this point has been a biweekly comic strip called Dykes to Watch Out For. The first few years of this strip were individual cartoons which, frankly, I don't find all that interesting. But in 1987 she introduced some regular characters and made the strip an ongoing serial -- "half op-ed column and half endless, serialized Victorian novel" Bechdel calls it. And it was at that point that it really took off. It's been collected in ten to twelve books so far, and I highly recommend checking it out.

Ten to twelve? Why not be more precise?

The one other odd-woman-out so far as the collections are concerned is The Indelible Alison Bechdel: Confessions, Comix, and Miscellaneous Dykes to Watch Out For. This isn't one of the standard collections. It includes a lot of Bechdel's other cartoons (of varying quality). It also includes what are, basically, outtakes from the regular strips: the strips from a monthly calendar she produced for a number of years, and other oddities like that. It's a fun book, but read the main sequence first.

So: the main sequence of the serial is collected in ten books; the other two books with 'Dykes to Watch Out For' somewhere in their title are secondary, but bring the number to twelve. See?

You also don't have to buy the books to try the strip. Most of the recent strips are on the web. For a long time they were run on the web site Planet Out, and they have an archive of them here -- containing strips #303 - #480. (Actually, although they don't have links to them for some reason, three more strips -- 481, 482 and 483 -- are also online there.) In the last few months, however, Planet Out has -- for some inexplicable reason -- stopped running the strip. The last few entries have been posted on Bechdel's Flicker photo stream as she looks for a new online home for the strip.

So you can use the online archives to see if you like the strip -- although, be warned: it is an ongoing story, best read in large chunks, and you'll be coming in right in the middle of a lot of story lines, without the helpful recap that Bechdel includes at the opening of each of the collections. I, personally, really prefer reading them on dead trees. But it's a good way to sample, I suppose. For a sample of the sample, here are a few personal favorites of mine: 304, 374, 420, 434. Although, to repeat: it really works best in much larger chunks -- in the end, it's really one long work (with a slightly shaky artistic beginning -- and it is far from the only comics for which this could be said.)

But. The key words in the sentence "Her major work up to this point has been a biweekly comic strip called 'Dykes to Watch Out For'" are "up to this point". Because her first full-length graphic novel is coming out in two months or so. It's a memoir, titled Fun Home: A Family Tragicomic, and based on the publisher's description it looks like it's largely about Bechdel's relationship with her father. All I've seen of it so far are the two sample panels that the publisher includes on the page. But I suspect that it may be Bechdel's best work yet, surpassing even her wonderful strip.

You see, in many of her later collections of Dykes to Watch Out For, Bechdel includes, after the regular strip, a "novella" featuring the major characters in a longer story (one which is usually referred to, but not narrated, in the biweekly serial) -- examples have included the birth of one of the main characters' child; a hectic day on which several of the main characters all move houses/apartments; a retrospective about how the characters met; and the story of a fundraiser held to help the bookstore run by one of the main characters (and worked in by several others) stay out of bankruptcy. And I've always thought that these novellas are the very best of the work -- that the greater length really allows Bechdel to shine.

Now, granted, I will dearly miss Mo & all the rest -- they're great characters, and some part of me would have preferred that Bechdel try a full-length novel about 'em rather than a memoir. But even so: it sounds like an extraordinary story, and I bet that the extra length will really allow Bechdel to do some fascinating stuff. (It's also more color-full than her normal work: instead of black-and-white, it will be two-color, i.e. blue-and-black-and-white, which is actually a wonderful look, I think, which has been used to good effect by many cartoonists.) 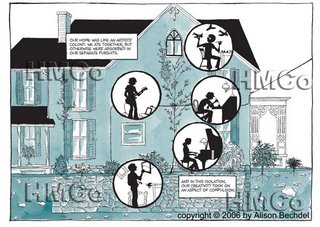 Anyway, it should be coming out some time soon. Watch out for it -- I know I will be. In the meantime, if you haven't read it before, check out Bechdel's ongoing strip.

[Update. I've been meaning to post a comprehensive review, but it's looking like I won't get around to it, so let me sum up and say that Fun Home is absolutely terrific, a truly marvelous book, and that I recommend it unreservedly to everybody.]

I completely and wholeheartedly recommend Alison Bechdel's work. I love Dykes to Watch Out For, but Fun Home deals with the unique situations of living in a funeral home and growing up "different" in a delicately balanced way. I admire the writing, and I love the artwork! I have all the books, I think, including the Indelible Alison Bechdel. Read Fun Home!