Music of Pain, Music of Anger

I clicked through because of politics.

I'd heard of the Dixie Chicks before -- frequently, of course, due to the public uproar around their (incredibly mild, really) comments about Bush -- but I'd never heard them before. Oh, I'd had a vague sense that maybe I ought to, but that feeling was basically all about politics: feeling that I ought to support people where the

...words that I said,
Send somebody so over the edge,
That they'd write me a letter sayin' that I better,
Shut up an' sing or my life will be over?

But I had no real impulse to listen to them because, well, they sang country music. And I didn't listen to country music. Oh, I liked the song I heard after Johnny Cash died, but I didn't have any big impulse to go find more. Just wasn't on my radar. One might think it should be, since it is (as Xander called it) "the music of pain" -- and there were certainly times in my life when I needed that. But it wasn't.

So when I saw Atrios's post on the Dixie Chicks's upcoming album, I clicked on the link to listen to a single from the album because of their politics -- and I thought, what the hell, if I can listen online, I might as well give it a try. I didn't even notice the single's title.

The first thing I noticed was that the song, "Not Ready to Make Nice Now", was awesome. So I started paying attention to it because of the music.

And I listened to the lyrics. I thought, instantly, based on just the chorus, that it was a subtle reference to the controversy over their anti-Bush remarks -- probably allegorized to a love affair, these things were, but still that it was about them. Then I went and read the lyrics -- and, no, there's no allegory, the lyrics are !@#$% about that controversy, straight up.

It also didn't sound like country music. And I saw that one of the band recently said that "We don't feel a part of the country scene any longer, it can't be our home any more... we now consider ourselves part of the big rock 'n' roll family." Indeed, a fan site said that the single "bear[s] little resemblance to the Chicks' original bluegrass/Western sound."

The musicians of pain are now playing the music of anger: rock.

And yeah, I love the lyrics --

So give "Not Ready to Make Nice" a listen. It's just awesome.

Hell, I may need to buy the whole album. 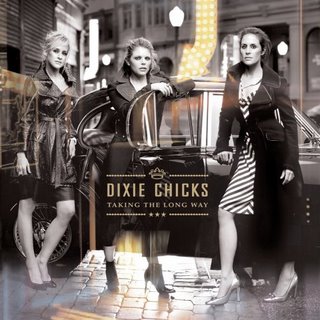 I'm just posting around today, I've noticed a number of people haven't realized the video's 'black paint' in I'm Not Ready To Make Nice is OIL.

On that thought, what would you do, if someone asked you to submit your blog for a job interview?

Worth thinking about, anyway"