Changes, The Book (Part One)

When I was a kid, my parents used to play the I Ching once a year.

I say "play" because that's the term they used. But the I Ching isn't a game; it's an oracle. For those of you unfamiliar with it, the I Ching is an ancient Chinese text. Its name translates as The Book of Changes. (The familiar English form, incidentally, is the old, Wade-Giles system of transliteration (the one that brought you "Mao Tse-Tung"); in the currently-fashionable Pinyin system (the one that brought you "Mao Zedong"), the book's name would be "Yi Jing".) It's an ancient text -- the oldest part is from approximately 800 B.C.E. -- which one uses by asking a question, and then making a casting -- tossing yarrow sticks, throwing coins, or the like.

My parents, as I said, did this once a year: on New Year's Eve. They had a particular old friend who would come over, and the three of them would drink champagne and ask the I Ching about the upcoming year.

(I found out some years later that my mother had, as a young woman, had a brief period where she was infatuated with the I Ching, consulting it daily; what can I say, it was the early sixties. At the time, the old friend who used to come over on New Year's Eve was one of her best friends, and it was a joint fascination. (It was the early sixties.) So I suspect a lot of the New Year's Eve ritual was a sort of nostalgia, indulging in the silly games of youth.)

As my parents consulted the I Ching, my sister and I would play -- allowed, on this one night, to stay up until midnight, a rare treat -- and then come down just before midnight to toast in the New Year with ginger ale. 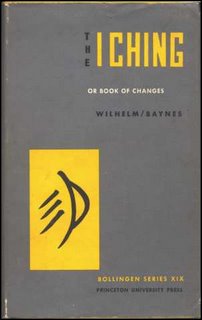 Then, one year I asked if I could play the I Ching with them.

They said no. I'm not sure why. Possibly it was because they were drinking -- but of course they often drank wine with dinner when we were around, and it's not like they were getting rip-roaring drunk. Most likely it was because this was one of the few times each year they got to see this particular old friend, and they wanted to have a conversation with her; if my sister and I had joined them, it would have been a distraction.

Those are, as I said, just guesses. But of course at the time I asked why not? What they said at the time was, "You're not old enough to play the I Ching."

I was, predictably, furious. I stormed off to my room where I decided that I could make up my own fortune-telling mechanism. My parents used the method of tossing coins, so I did too; but I didn't know how it was done, so I approached it in its simplest form, as a branching tree: the first toss would go in direction A or B; if the former, then you'd toss again to decide between A1 and A2, and if the latter then between B1 and B2; and so forth. I didn't get very far: it wasn't much fun making the chart up, it was hard to think up enough fortunes, and of course I soon enough calmed down and went on to something else.

It was from this incident that I got the idea that the I Ching was somehow an adult book -- filled with some mysterious wisdom that would corrupt the mind of a mere youth. So of course the first chance I got I pounced on it and read a few entries. From this point of view, it was decidedly disappointing. It was no more "adult" than your average fortune cookie, if possibly a bit more interesting. I didn't see what the big deal was (and, indeed, I still don't, which is why I presume that the reason my parents gave was a pretext for something else).

And, eventually, when I was seventeen, I was finally deemed old enough to play the I Ching with them. I was delighted to be able to do it at last, but like many forbidden things, violating the stricture was the only exiting part. It seemed, otherwise, dull, even a bit silly. I had been right all along, I decided: my private little fortune-telling game had been just as good as the I Ching.

Was I right? Was my little game just as good as the I Ching?

Insofar as fortune telling was concerned, of course it was: they were (and are) both absolutely useless. Fortune telling by the I Ching is just as silly as astrology or fortune cookies or reading entrails. It doesn't -- it can't possibly -- work at all. That's why my parents treated it, properly, as a game. Which was precisely what my little homemade version was too.

But -- and this is the "no" part of the answer -- my little homemade version was, not surprisingly, not as good a game. My method for picking fortunes was far less elegant and aesthetic. And, most importantly, the fortunes themselves were far poorer: instead of poetic little enigmas -- good for application to many situations (as any long-standing oracle would have to be) -- I had, as I recall, single words that seemed vaguely prophetic. Not nearly as fun to get. Even fortune-cookie slips can be fun or dull, well or poorly written.

Which leads to the other question. Let us agree (since I try and write for those in the reality-based community) that the I Ching is utterly useless for fortune telling. You might as well flip a coin -- indeed, by the most common method, you basically are flipping a coin. But does that exhaust the book's value? If the I Ching is an ancient text that is used as a fortune-telling device, does that mean that it has no other uses? No other value or worth?

I shall explore that latter question further in part two.

(This is part one of a two-part post; part two has now been posted.)