You can read McCloud's comic either here, or with a slightly different interface here. (Update: An even better interface is here.) McCloud has a brief FAQ about the comic up on his web site here. 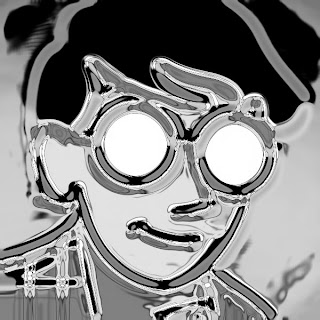 (Image adapted from a self-portrait by Scott McCloud (found
here) by using the "Chrome" filter in Photoshop.)
I have to say, it was very clever of Google to hire McCloud to do an introduction to their comic. While I admit my attention drifted a bit in chapter two, for the most part it was quite successful in getting me to want to try their new browser. (My main computer is in the shop at the moment, so I ain't downloading anything major now, but I'll probably try it once it gets back.) it certainly sounds like it'll fix some of the frustrations of the all-too-frequently crashy Firefox, which is the main browser I use at the moment. (Update: Actually, I won't be trying it, since I just learned (here) that there is no mac version.)

Of course, it's supposed to make the browser sound good: it's basically an ad -- aka propaganda. Sort of the comics equivalent of an infomercial. But it's an informative one, with far better production values than most; and -- most importantly -- it's an entertaining one. (And of course all this adds up to it being, for me at least, an effective one.)

One thing to note about the comic is that it's fairly substantial: when I first saw a link to it (here), I assumed it would be a brief introduction of perhaps a few pages. But actually it's a full 38 page comic -- not a minor work at all. And it goes into a fair amount of detail about what they were trying to do with the browser -- the problems they were trying to fix, the features they were trying to add, and that sort of thing.

An excerpt from p. 27 of McCloud's Google Chrome.
As a long time reader & fan of McCloud's nonfiction comics, it was interesting to read one which -- while very much in his familiar style -- did not feature his familiar avatar, but rather showed a host of other figures in its place. (It was interesting, for example, to see how his standard gestures worked when others did them -- or what replaced those gestures in similar situations.) I will say that I think the comic would have been slightly more effective with a single tour guide, although that's a minor point.

My main complaint about the comic is that -- quite oddly for a McCloud comic -- it isn't really well adapted to the web: it's a print comic scanned in, with all the awkwardness inherent in that format (an awkwardness that has never been better explained than by McCloud himself). He says that they're working on a better interface, and I hope that's true. I certainly can't imagine that many people will print the thing out, so I don't know why they (McCloud? Google?) chose that format -- maybe they're printing it to distribute? Still, rather odd.

Despite this, it's still an interesting & entertaining comic, if you don't mind reading admitted advertising.

Scott McCloud's 38-page "Google Chrome" comic was just so insufferably smug, self-important and impenetrable that we're still trying to knead out the resulting big rubbery one long enough to actually install the damn thing... McCloud's comic was so filled with ill-defined, meaningless technobabble that it made a complete mockery of his masterpiece, Understanding Comics. Valleywag's Paul Boutin brilliantly observes that the whole thing reads "like the middle of a Neal Stephenson novel."

Well, that explains why I got lost in part two. But overall, personally, I liked it more than that.

Also -- the point of his post -- Brownlee links to this round-up of parodies of McCloud's comic. Follow the links in that post for more parodies (it's really astonishing how many there are already!) -- I liked this one and this one myself. The latter ironically has a more McCloudian interface than the original.