The Other Graphic Novel of the Year, Coming Next Month

The graphic novel of the year, of course, is David Mazzucchelli’s Asterios Polyp. This isn't my judgment, since I haven't read it yet (for the usual reason), but I have a copy and am looking forward to doing so, since I preordered it as soon as I heard about it -- basically, they had me at "Mazzucchelli". (I'm a fan of his from way back.) But everyone else seems to think it's the graphic novel of the year, and I bet they're right.* I'm looking forward to this one -- one reason I haven't read it yet is I want to find the time and space to do it properly. (Which means it might be years, I suppose, until I get to it...)

But then there's the other graphic novel of the year, which I just saw (here, via) is actually coming out next month: the long-awaited, much-rumored adaptation of the book of Genesis by none other than R. Crumb.

Now, I'm not quite as unmitigated a Crumb fan as I am a Mazzucchelli fan. I'm certainly convinced that Crumb is a brilliant draftsman, with a fine eye for social detail. But I'm not sure he's the best writer ever. As I've said before, my favorite Crumb comics are those where he's working from other people's works -- his collaborations with writer Harvey Pekar, his adaptations of Kafka and others, and so forth, plus little oddities like his 8-page piece on Philip K Dick, and of course his short history of America. Because in general, his more characteristic fare leaves me somewhat cold (however well drawn).

But it seems to me like adapting Genesis is the task that Crumb was born for. First, it's an adaptation, someone else's words (I believe that he is incorporating the entire text -- based on but not strictly adherent to Robert Alter's translation -- into his work), which as I said are the places where I think that Crumb really shines. While Bible adaptations might have, at first blush, an awkward air of the classics illustrated, stories-for-kids to it, this isn't necessarily so at all: there have been absolutely brilliant comics adaptations of biblical books published recently, and I'm sure Crumb will do as good a job (albeit in an entirely different way). And of course Crumb isn't going to pretty up the stories the way that children's adaptations' do; on the contrary, I think it's central to Crumb's project that putting the often violent, often sexual (often in a disturbing way) words of Genesis into images force us to confront their meaning in ways that we can avoid when reading all-too-familiar words. As Jeet Heer writes in his piece on the book:

As he did in earlier adaptations, [Crumb] embraces a volatile, often abrasive text soaked through with lust and blood.... The completeness of this version is important, because, as Crumb rightly complains, every other comics adaptation seems to have been streamlined and modernized, often to make the shocking old stories palatable to readers, especially kids.... Unlike these bowdlerized versions, Crumb’s doesn’t hide the fact that the holy book is filled with stories of incest (Abraham marrying his half sister, Sarah; Lot being seduced by his daughter), frenzied bloodlust (God’s various acts of mass murder, the terrible slaughter of a village after a young boy seduces Jacob’s daughter, Dinah), and general unsavory behavior (the theme of fraternal violence that runs from the story of Cain and Abel to the concluding saga of Joseph and his spiteful siblings). Images can cut deeper than words, especially when those images are executed by so psychologically alert an artist as Crumb. It’s one thing to read about the daughters of Lot seducing their father in a desperate attempt to repopulate their tribe after the destruction of Sodom; it’s quite another to see Crumb’s depiction of the sodden Lot, his eyes in a daze, straddled by a zaftig Amazon who looks vaguely troubled by her reproductive mission.

So like Asterios Polyp, I expect this one to be great.

But I have a bit more to go on here. Reading excerpts from an independent fictional architecture like Mazzucchelli's graphic novel can give you a sense of the style, but not much more: it's a narrative whole that needs to be confronted as such, and an unfamiliar narrative that one needs to encounter on its own terms. A biblical adaptation, on the other hand -- while doubtless having ongoing themes and an overarching artistic coherence that adds much to the work when read in its entirety -- is easier to read in bits and pieces. The original text is episodic; for a great many of us, the stories are deeply familiar, so that we can mentally place them in context without much trouble -- in fact, many of us are used to reading the text in bits and pieces anyway. And so on.

The only official excerpt published in English, that I've been able to find, is the eight-page excerpt published in The New Yorker -- which, alas, is not officially online (the link above just tries to get you to subscribe). A blogger has posted it here, although who knows how long that will get past the copyright police. There's also a photo of a two-page spread of the issue here, but it's hard to see well and doesn't represent the project in a fair way.

But if you read French, there's a lot more online -- and this requires a fairly low-level knowledge of the language, at least for those who are familiar with the original text (normally I'd need a dictionary and a fair amount of time to read a text like this, at least well; but here, with the English text so familiar, it is quite easy to read quickly without any assistance.) A French journal, Télérama, is publishing a bunch of large chunks of it. (via) So you can go ahead and check out Crumb's versions of the stories of Adam and Eve, The Flood and Sodom and Gomorrah, the Binding of Isaac and several others. It's great stuff; check out this page from the destruction of Sodom: 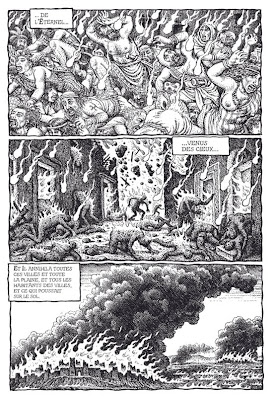 It's a great time for the graphic novel. And Crumb's Genesis, like (if reputation is anything to go by) Mazzucchelli's Asterios Polyp, are two of the reasons for it.

Update: I've now read Asterios Polyp. I may try to write up my thoughts later -- hopefully after another reading (or two) -- but the brief version is: it's fabulous. If you're reading it -- no, if you're rereading it, too much distraction (& possible spoilers) for a first reading -- check out these annotations (via, which links to a lot of other resources too.)

_____
*I only hope it's success means that someone finally reprints Mazzucchelli's stories from Rubber Blanket #1 & 2 in some accessible form...