Can We Have An Update on the Acutal Work of Art, Please?

Apparently Andres Serrano's long-controversial photograph Immersion (Piss Christ) has been destroyed (some news reports have "damaged") by fundamentalist Catholic protesters in France. All the various news stories and blog posts I've seen on this (e.g.) have focused on the culture-war angle -- the photograph has always been controversial, the rise of Christian fundamentalism and so forth; P Z Myers (reasonably) compares this to the Taliban's destruction of Buddhist statuses. Etc.

But I'm primarily worried about the artwork. Can it be repaired? More importantly: Immersion (Piss Christ) was a photograph, which are often (but not always) made in series -- so that there are a handful of "originals" rather than just a single original, as in the case of a painting. Is this true with Serrano's work? Nothing I've seen so far has addressed this, but I'm actually very eager to find out.

Because here's the thing: apart from the politics and the controversy... Immersion (Piss Christ) is a very beautiful work of art. Take a look at it, and try to forget what you know about its origin, and just look at it as an image: 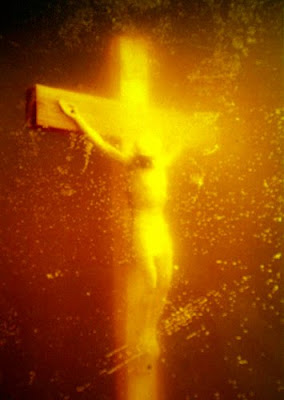 Gorgeous. And also, as many people have noted, a very religious image. Serrano himself has said that "I have always felt that my work is religious, not sacrilegious... I am drawn to the symbols of the Church.... I like to believe that rather than destroy icons, I make new ones." A writer for the Guardian makes a similar point here. Even PZ Myers, not known for his sympathy to religious expression, notes that the "luminous golden glow" is "reverential".

I hasten to add that this shouldn't make a difference: anti-religious art can be as beautiful as religious art, and I hope it goes without saying that the destruction of artwork is immoral whatever viewpoint it promotes or the intention of its artist to shock or not. Saying Serrano's work is religious is a description, not a defense, since I don't think that the claims (blasphemy, offense, intentional sacrilege) against which it would be a defense are ones that in fact require a defense. If those charges are true, it doesn't matter. But, as it happens, I think they're not. Immersion (Piss Christ) is a work of religious art -- one focusing on (among other things) the physicality of the incarnation, with all that that entails.*

But mostly it's beautiful. I've only seen reproductions, which never do a work of art justice, and I'd love to see the original someday. Can I? That is, are there other, still-undamaged originals made by Serrano from the same negative? Or was there only one, and it is truly gone? I'd really like to know. Anyone feel like doing (or linking to) any reporting on this angle?

Update: Telling this story to a photography buff, he assured me that more than one copy of "Piss Christ" was made (photos are often made in series, usually in the 3-12 range I think). So it does still exist, somewhere. Just don't tell the wackos.

______________
* I'm reminded of the line which the late David Foster Wallace quoted from a novel by William H. Gass (which I've not read and know nothing else about), Omensetter's Luck: "The body of Our Saviour shat but Our Saviour shat not."