So I've been listening to a lot of jazz in the last few weeks.  It wasn't a totally new thing for me: I'd heard some before, and had almost a dozen jazz albums.  But I'd never listened to much, and I hadn't known that much about it; I had enough book learning to teach what I teach, but it was a weak area for me*.  I certainly hadn't listened to any (for non-work purposes) in quite a while.  (The mark of this was that when I decided I wanted to hear some, it wasn't on my computer, unlike most of my rock, folk and classical; it was all in CD format, so I had to go down to storage, dig through, get the cds, and add them to my itunes in order to hear them.)  But what began as the merest whim -- partly driven by the thought that my class on Holiday was approaching, and I ought to balance things out any more, partly by the fact that Barry Eisler recommended Junko Onishi, and I listened to a bit she's great -- rapidly snowballed into an obsession, and pretty much all my leisure time recently has been devoted to listening to, and reading about, jazz.

What should you listen to?

One might think it's a tricky question.  Jazz is, after all, a whole musical world, with a huge tradition, a wide variety of sounds and styles, and a lengthy back catalog.  It's not really that different from asking what rock album, or what classical music, should one listen to first.  There are a hundred different answers, right?

You listen to Miles Davis's 1959 album Kind of Blue.

It's strange how obvious it is, but it is also completely, truly obvious.  Anyone who tries to deny it is either being willfully perverse, or simply trying to be different.

Now, I'd heard Kind of Blue before: it was one of the dozen albums I got out of storage.  I'd had it for decades -- ever since, probably when I was in college, I asked my father what one album I should listen to if I wanted to listen to a jazz album. and he walked me into a record store** and asked a rather gobsmacked clerk the same question.  Naturally, inevitably, I walked out with the obvious choice.

Why is it so obvious?  Because -- quite unusually, as far as art goes -- Kind of Blue combines four different, key things:
Now, getting all of those things into one package is extremely rare -- in fact, I can't, at the moment, think of another example.  A piece of art that is both admired by the experts and widely popular even with people who don't otherwise don't know, or don't care for, the art at all?  A piece that is both a masterpiece, and a breakthrough innovation, and one of the most popular examples ever?  Seriously, does that ever happen?  Usually the great stuff is hard and inaccessible; usually the accessible stuff is scorned by the cognoscenti; usually the popular stuff isn't very good.  But Kind of Blue has it all.

It has other things going for it.  It's by Miles Davis -- he's the bandleader, and composed or co-composed all the tracks, in addition to playing trumpet -- who was unquestionably one of the handful of major musicians ever to play jazz.  But most of the sidemen are giants, too.  John Coltrane, an almost equally influential figure to Davis, played tenor sax on the album; Cannonball Adderley, yet another major figure, played alto sax.  Bill Evans, a fourth giant, played piano on four of the five tracks, and co-wrote two (and the original liner notes.)  If you're ever going to go beyond one album -- even to as many as five, and unquestionably if you go up to, say, twenty -- then you'll encounter those sidemen again as bandleaders in their own right (Coltrane definitely, Evans quite probably, Adderley probably).  So by listening to Kind of Blue first, you get to know (if you read the credits and listen carefully) not just one, but several of the major figures in Twentieth Century jazz.***

As a starting place, Kind of Blue is just bloody perfect.  People who don't usually like jazz like it, so it's a good place to start, since you'll probably like it.  But people who do like jazz not only think it's brilliant, but know that it's a landmark of the tradition.  It's not just an easy way in: it's the rich heart of it. 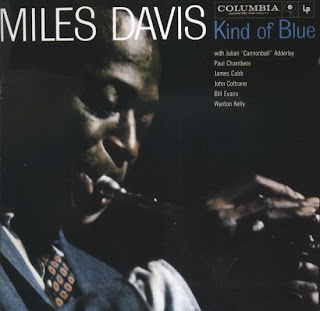 If you ask people what five or ten albums to start with, you'll get a lot of different answers.  (Here are ten: one, two three, four, five, six, seven, eight, nine, ten.)  But Kind of Blue is on every single list.  Some of the lists include comments along the lines of "Any list that doesn’t include Kind of Blue as essential listening is worthless and can be instantly disregarded. Hell, I could make this #1-10 and still have a good list."

Now it's possible to find lists of this sort without Kind of Blue on them.  (Here are two: one, two.)  Most of these seem to be deliberate attempts to be different -- not to list what everyone else is listing.  The first of those two begins by writing "It's too easy for someone to recommend John Coltrane, Miles Davis and Thelonious Monk.  This aught [sic] to get you off to a different start."  But of course the comment is self-refuting.  It's easy, if you know something about jazz, to list those.  But that's because you know something about jazz; the list is supposed to be for someone who doesn't.  Also, it's easy because everyone knows what ought to be on such lists.  Being different for its own sake has its place, but getting people into the basics of something isn't it.  (Those lists are useful... for moving on from the first top ten.  Not what they declare themselves to be, but what they, in fact, are.)

In fact, I must admit, while the whole album is clearly the first album to listen to, one track -- the first, "So What" --is clearly the most famous.  In my current obsession I've been listening to mostly albums, but I have also looked at (if only for guidance in selection) four different anthology albums, all multi-disk sets which aim to introduce listeners to jazz.  (I think they're frequently used for college courses; at least one was designed specifically for that.)  The four that I've looked at -- so far as I can tell, the four major ones (but, again, I'm new to this) -- are:
Unsurprisingly, there's fairly limited overlap between the four.  (It would be surprising if there was a lot; it would be equally surprising if there was none.)  But one song that all four contain is "So What" from Miles Davis's Kind of Blue.

Now, what should be the second album is much harder -- after one, we have a legitimate difference of opinion.  I hope to get into that in a later blog post.  And beyond that it gets really complicated: if the lists of top tens are different, the lists which contain 25 or 50 or 100 albums are increasingly so (about which too I hope to have more to say anon).  Increasingly you see different views of the matter; different tastes emerge.  And at some point, of course, the explorer will start to develop their own.  Yeah, high numbers are complicated.

** I doubt they had many records by that point -- we bought it on CD.  But I don't seem to recall them ever being called cassette stores or CD stores.  Music stores, I guess.  But we also called them record stores.  Until we just started calling them "iTunes".

*** I don't know much about the other three players on the album -- remember, I'm just starting out.  My sense is that they weren't figures of the stature of Davis, Coltrane, Evans and Adderly.  Maybe I'll soon discover otherwise.  (They certainly were all sidemen on a lot of major projects.)  But, to complete the credits: Wynton Kelly played piano on the one track that Evans didn't play on.  Paul Chambers played double bass on the album (and played on a lot of major albums by both Davis and Coltrane).  And Jimmy Cobb played drums; as of right now, he is the last surviving musician to have played on Kind of Blue.

**** In addition to the 5-CD set, there was also a series of 22 albums, each serving as a "best of" of one of 22 jazz musicians.  (You certainly can't fault PBS for inadequate merchandising.)  And there was also a single CD called The Best of Ken Burns Jazz, which was a "greatest hits" of the 5-CD greatest hits selection -- a distillation of the distillation, all of jazz in 20 tracks.  One of those 20, naturally, is "So What" off of Kind of Blue.

What a wonderful introduction to Jazz and thank you for those great 'top x' lists.

I think everyone will agree with your sentiments, even if, like me, they usually can't stand Miles Davis' sound.

All those other players you mentioned went on to be giants themselves - you will enjoy the exploration.

There is also the significance of the 'Blue' in this art which was really nicely explored in a BBC documentary a few years back - it discussed Picasso, Miles Davis and that guy who rolled naked women painted blue on canvases. I doubt I can find that reference for you.

I did find a nice review of a book about Miles here:http://www.newstatesman.com/books/2009/08/miles-davis-blue-jazz-music

The review contains the brilliant statement: Trane's shocking demolition of the dainty brickwork of Rodgers and Hammerstein's "My Favourite Things" which he stripped back to a brutal but dazzling modal exploration in E minor and E major...

So my humble suggestion is the second album to get in to Jazz is 'My Favourite Things' by Coltrane.

Thanks for the wonderful comment! The Coltrane version of My Favorite Things is, indeed, one of mine. I may mention your recommendation in a future post.