If you're at all serious about it, t takes a really stunning amount of self-confidence to label a record "The Shape of Jazz to Come".  Particularly if you're a relative unknown putting out their third-ever album.

Which makes it pretty bloody remarkable if you title your album that, and you're right.

But Ornette Coleman did, and was. 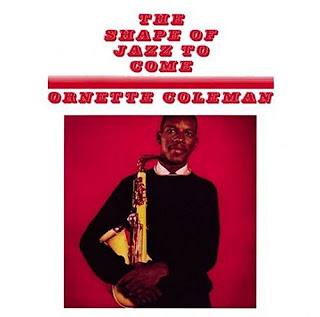 Appearing only a few weeks, I believe, after Miles Davis's groundbreaking Kind of Blue (1959 was a really astonishing year for jazz), Coleman's album was the opening shot in the "free jazz" style -- avant-garde jazz that (in the way of avant-garde artists everywhere) ditched all the rules, made great art and lousy sales.  Or, as someone who actually knows what they're !@#$% talking about puts it, it


was a watershed event in the genesis of avant-garde jazz, profoundly steering its future course and throwing down a gauntlet that some still haven't come to grips with. The record shattered traditional concepts of harmony in jazz, getting rid of not only the piano player but the whole idea of concretely outlined chord changes. The pieces here follow almost no predetermined harmonic structure, which allows Coleman and partner Don Cherry an unprecedented freedom to take the melodies of their solo lines wherever .they felt like going in the moment, regardless of what the piece's tonal center had seemed to be.

Further reflections on the album from the actually informed can be found here.

I don't have a lengthy review of it -- except that, to ears as utterly untrained as my own, it's fabulous, but not particularly difficult or revolutionary (we're not talking Schoenberg here. Or, to once again quote the above-cited "actually knows something" person,


Coleman's ideals of freedom in jazz made him a feared radical in some quarters; there was much carping about his music flying off in all directions, with little direct relation to the original theme statements. If only those critics could have known how far out things would get in just a few short years; in hindsight, it's hard to see just what the fuss was about, since this is an accessible, frequently swinging record. It's true that Coleman's piercing, wailing alto squeals and vocalized effects weren't much beholden to conventional technique, and that his themes often followed unpredictable courses, and that the group's improvisations were very free-associative. But at this point, Coleman's desire for freedom was directly related to his sense of melody -- which was free-flowing, yes, but still very melodic.

...It's always nice to have one's naive impressions backed up by actual knowledge.  Yeah, this is an album that is fun to listen to and not particularly challenging to the modern ear.

The reason I bring this up is that I saw this morning (via) that the Library of Congress had put out its annual list of 25 items added to it National Recording Registry this week.  Naturally I (given my recent preoccupations) scanned it to see what jazz, if any, had been added, and I noticed at once that Coleman's Shape of Jazz to Come had made the list -- indeed, it seems to be the major jazz album on the list.  So I thought I'd mention it.

(There's a lot of other great stuff on the list, obviously, but that's the album that stood out for me as a nascent jazz fan.)

So three cheers for Coleman, and the Way the Shape of Jazz to Come Was.*


...All of which leads me to the obvious next question: what other classic jazz albums are among the 375 recordings so far chosen for the Library of Congress's National Recording Registry?  (Which, in addition to other types of music also contains speeches, news events, recordings of poems, the famous WPA recordings of former slaves' memories, recordings of whale and bird songs, radio dramas, baseball games -- all sorts of other things.  The criteria, I believe, is historical significance (not aesthetic significance.))

It's not as easy a question to answer as it sounds -- where do you draw the jazz/blues line, for instance?  And there are a fair number of items which I simply don't recognize, don't know anything about even if the name is familiar, or which I know in other recordings -- and in those cases I don't know if the (included) recording counts or not.  And, truth be told, I don't have time to research each piece on the list.  But glancing it over, these are things which (I think) are jazz recordings on the list:
And two non-musical but clearly relevant items:
I probably missed something obvious, and included something bone-headedly.  But that's what I saw at a glance.  (So, at my rough count, 48/375 items.  A decent total, given the scope of the list.)

Incidentally, the other jazz item to have been added this year was The Audience with Betty Carter, about which I know nothing other than what the L of C says in its list.  Sounds worth listening to, though.

Oh, and following up on the "1959 was an annus mirabilis for jazz" thought, note that there are now no less than five jazz albums from 1959 on the list: Coltrane's Giant Steps, Davis's Kind of Blue, Mingus's Mingus Ah-Um, Brubeck's Time Out and, this year, Coleman's The Shape of Jazz To Come.  Really remarkable, frankly.  In no other year could a "best of the year" list be mistaken for a "best of all time" list. 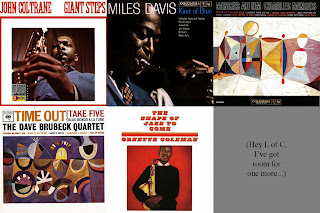 The list itself contains all sorts of utterly fascinating things, and maybe I'll explore it again sometime.  Check it out if you're curious (and if you're curious, you should be curious about this, because it's worth it.)

In the meantime, again, chapeaux! to Ornette Coleman's bold, justified arrogance -- in the tradition, as someone has said, of Babe Ruth pointing in the direction he was going to hit his home run.  In America, it ain't considered arrogence if you follow through.  Coleman, like Ruth, did.

It great that you linked to the John Fordham article. I have been been going through his 50 Great Moment in Jazz and I think it is a wonderful introduction to the jazz history: http://www.guardian.co.uk/music/series/50-great-jazz-moments?page=4

I agree about the 'Shape of things' it is a lovely album and for a free-jazz musician he made very tuneful records.

The two live albums 'At the Golden Circle Stockholm' are wonderful and very accessible (and have a perfectly composed album cover too, the text pushing the group in to a huddle amongst the wintry trees)

And you get to hear his voice introducing the songs and the group - I love hearing the voices of jazz musicians on albums, and Cannonball is my favourite - milk and chocolate, his voice.

Don Cherry went on to make remarkably difficult and crazy records, but the the most beautiful thing he ever did was to help raise Neneh Cherry (his step-daughter). His son is David Ornette Cherry - named after, who else?