One of the things I like about the blogosphere is its nescient culture and traditions. I haven't done all that many specific blogosphere games (just one meme), but I do like them. And because of various circumstances I can participate, this week, in not one but two blog traditions that I don't usually do.

The first of these is the Friday Random Ten. The notion here is simple: get random songs from your iPod, note the first ten, and post them. I haven't been able to do this until now because I haven't had an iPod. But I was given one for my recent birthday; and after a few weeks most of my music (and some other fun stuff) is now on the iPod. I doubt I'll do it every week, but for now, here is a

* Yes, I have the entire thing on here. It comes up a lot on "random" because they put track dividers every three minutes, so there are a lot of tracks.
** Yes, I have The Hobbit too. Shut up.

This, incidentally, is why I never play my iPod on random -- I have a special playlist called "songs" which includes all but only songs, and if I want random I play that. But as I understand the rules of the Friday Random Ten, one sets random for everything one has on the iPod... which, for me, includes some non-music and leads to some weird choices. So it goes.

The other Friday blog tradition is pet blogging. This began with Kevin Drum's cat blogging, but has since expanded to a lot of different types of Friday blogging (plus parallels on other days too). Well, we don't have any pets... but we do occasionally pet-sit a pair of unrepentant felons known as Weber and Fields. They're with us this week, so here we have 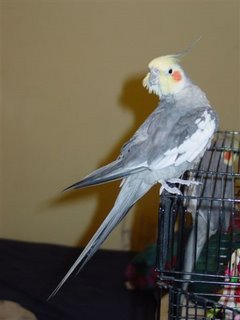 Ruler of the Roost 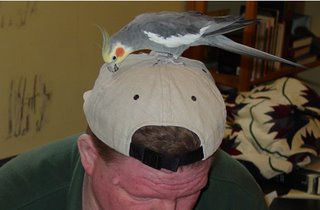 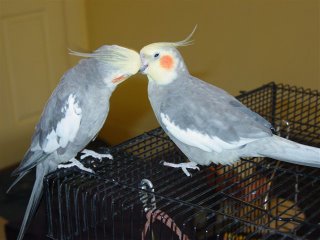 Squabbling (not kissing, despite how it looks)