If this doesn't make you laugh early on, just bail. Because either you'll get why this is the greatest thing ever, or you won't. If not, stop as soon as you figure that out. It won't get any better for you.

The rest of you will love it.

Actually, I have two rather more serious posts a bit down-blog, which I was fairly tempted to deliberately leave at the top, since I think they're closer to the spirit of what I hope to do here than, well, this. So if this doesn't make you laugh, read this and this, and you can weep for our country instead. I don't often post multiple times in a day, and the others are better pieces of writing -- I sort of hate to see them get buried beneath this frivolity.

But the following trail of links made me laugh to beat the band, and sometimes one needs that. Besides, alongside a strong reality-based worldview, we here at Attempts also have a strong commitment to whimsy, strangeness and all-around quirkiness. So why not. It all starts with a single dinner party...

Superman went to a Shabbos dinner. (link via)

Let me say that one more time, just so we're all clear: Superman went to a Shabbos dinner. 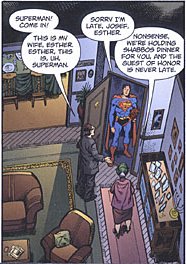 And not just in a brief panel. No, he eats there over the course of, like, three pages (reportedly -- I haven't read it, although obviously I have to go get a copy immediately). This was in Action Comics #835, written by Gail Simone and drawn by John Byrne. Most of this issue is apparently devoted to other matters, a fight against someone named Livewire, but at the end of the comic he goes to Shabbos Dinner with some couple. 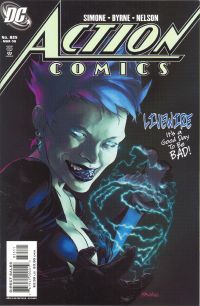 An Orthodox Jewish comics fan goes and nitpicks the entire scene. (This is at a blog called Suspension of Disbelief, although the blogger in question is not the usual blogger there, but rather a guy named Mordechai who usually blogs elsewhere.) We're talking things like this --

Also, if those are rolls to Superman’s left? They should be covered. During Kiddush and until the blessing on the bread is made, any bread products on the table are covered.

Superman, you mean to tell me you’re "familiar with Kiddush" but you don’t know rule one of Orthodox male/female interactions? That’d be look, don’t touch. You don’t kiss a Jewish woman on the cheek. Ever. Unless you’re family. This is a major error here.

That bit about "familiar with Kiddush", by the way, comes from earlier in the scene: it's a direct quote from Superman. Yes, Noble Readers, Superman is familiar with Kiddush. We can all die happy. (Although knowing about Kiddush but not negiah isn't actually that surprising -- they make Kiddush in Reform & Conservative congregations, but negiah is not at all widely observed (at least to the no-kissing-on-cheek level.))

But stick around (if you've come this far), 'cause we're just getting going. 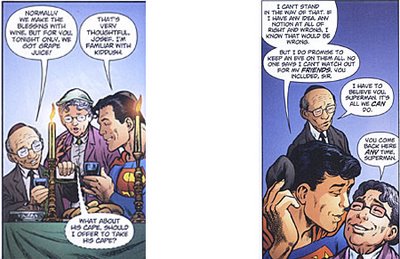 Superman is NOT A HUMAN. I am not a Talmudic Scholar, but wouldn't his behavior be covered under the rules for animals rather than persons? it is well established that nonhumans are NOT responsbile for obeying Jewish law. He can even kiss Orthodox women- he cannot break ritual purity any more than a dog, cat, or helper monkey can.

I'm not sure that Superman is actually kissing Esther in that panel, he may just be doing the California air-kiss thing, which would be fine. Although given the errors he made with the flowers and the doorbell I wouldn't expect Esther to trust him not to get it wrong.

Could it be that the couple Superman is visiting simply isn't as observant as everyone is assuming? And why blame Superman for making mistakes? Why should he know better?

Now, regarding the debate about Superman's (and other heroes) human status, would Josef and his wife know that he's alien? I'm not up on whether Superman's origin is common knowledge in the modern DCU.

The problem is how do you define “humanity”? I myself would not make the attempt. Superman and J’onn seem to act as though they have souls though.

Faith and Doubt by Rabbi Norman Lamm contains an essay called 'Religious Implications of Extraterrestrial Life'. In it he says... If we should discover other free and rational species we shall of course include them in the community of uniquely bio-spiritual creatures.'

Among most of my orthodox older relatives the women certainly touch men - it seems that the younger generation is more stringent. So it would not surprise me at all for a woman of Mrs. Josef's age to allow heself to be kissed on the cheek.

This all leads into lots of other discussion, including a lengthy consideration of the whether the fact that Wonder Woman was sculpted in clay by the Greek Gods makes her an idol, or is she just more like a golem?

The writer of the issue herself shows up in the comment thread to mention that she loves the thread, that she did do a lot of research, that not everyone is strict about the things the writer is mentioning (true), but also to defend the right of readers' criticism.

And at one point we get the Best. Comment. Ever.:

Being Jewish sure looks complicated.

'Nuff said, as they used to say in the comics world. Except... 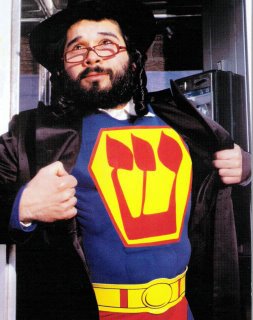 (Image from Heeb Magazine #3, via Dave's
Long Box (which rules, by the way.))
Part the Fourth:

One commentator shows up to link to his (I think his) own treatment of Superman Halachka, as well as his discussion of whether the Kryptonians are Jewish. This was apparently "originally conceived as a way to teach halachot", and includes facts such as the following:

Many versions of Superman keep the Kent clothes hidden in a pouch inside the cape. While flying on Shabbat, this is no problem - the air is a makom ptur. But once grounded, he'd better be in an eruv or he's got problems.

And yes, the section on brit milah contains the obligatory Larry Niven reference.

At least with Superman.

The Road Goes Ever On and On...

But if you want to know more about the religious affiliations of comic book characters, there's a web site that will tell you everything that you could possibly need to know. Superman is a Methodist, for example. There are lots of Jews -- but just the usual suspects, either. The most surprising, perhaps, is the (rather late-breaking) revelation that The Thing -- yes, Ben Grimm, ol' blue eyes himself, is Jewish: 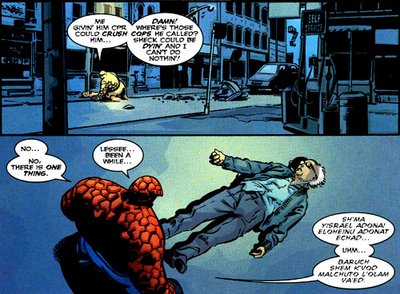 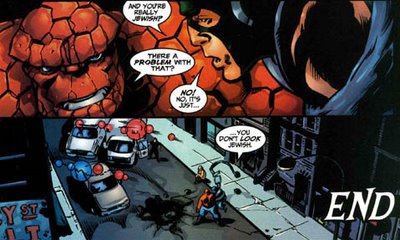 Superman is a Methodist? I was baptized a Methodist! Hilary Clinton and Laura Bush are Methodists! According to Roy Blount, A Methodist is a Baptist with shoes. According to some Baptist cousins who were making much of the Methodism of our branch of the family, Methodists sing ALL the verses of the hymns.

Methodists are often very intellectual, so much so that their faith gets a little... not-so-faithful.

According to Norman Maclean, author of A River Runs Through It, Methodists are Baptists who can read.