Blogger just introduced a beta version, which I just switched over to. Except some bugs to need ironing out -- transition glitches and the like -- over the next howevermany days. 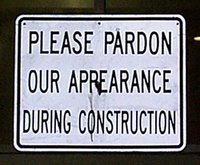 The best new feature: tags! Now I can categorize my posts into categories like politics (by far the biggest), literary, comics, whimsy and things belonging to the emperor. (If you're curious about the provenance of that last phrase, read this; the original text, in both the original Spanish and in English translation, can be found here.)

Like the entire beta-transfer, the tags are a work in progress. I've tried to keep the number down so that most posts fit into between one and three (a few have been in four; one, I think, in five). Most are self-explanatory; most of the rest will become clear upon a minute's inspection; most of the remainder are deliberately obscure. A few notes about the others:
I think that at this point each post is in at least one category (unless I missed some). I'll probably be fine-tuning the categories for a while yet.

While I was at it, I updated some of my blogroll. (The new blogroll function is again in the pluses-and-minuses category: easier to edit old entries, harder to get them in order.) I've added some new(ish) discoveries such as Self Portrait As, Hugo Schwyzer, Asking the Wrong Questions and Dave's Long Box, and some I-can't-believe-I-left-them-off old ones such as Feministing, Think Progress, 3quarksdaily and Balkinization. I've also updated a few old bookmarks (let me know if there are any remaining broken links...) They'll be back in strict alphabetical order as soon as beta blogger cooperates. (Update: That's now working too -- I think it's just slow. And doesn't ignore articles. Ah well.)

Finally, while I'm talking about old posts of mine, let me mention an update to fairly old one. Part One* of my Best of the Blogosphere series was about an old post of John Holbo's. Well, I just recently found out (via this thread) that he actually wrote a follow-up post to the one I highlighted. Like many sequels, it's not as good as the original, but still, if you liked the first, it's worth taking a look at.

Welcome to beta Attempts. Mind your hats goan in.