Is This Man Worth Two Presidents?

Wallace: Hamilton? He ain't no president.
D'Angelo: ...Ain't no ugly ass white man get his face on no legal motherfucking tender, 'cept he president.

Via boingboing, I learn that the U.S. Mint is planning on releasing a new series of dollar coins -- a third attempt after the earlier unsuccessful Susan B. Anthony dollars and Sacagawea dollars.

The first interesting thing I learned from this article was why the Sacagawea dollars didn't go over. Everyone** knows that the Susan B. Anthony dollars didn't work because they were too much like quarters: people would get confused, and be shortchanged by a factor of 75%. Apt to make anyone cranky. But they learned from this experience, and the Sacagawea dollars are quite distinct in size, feel and color. So what went wrong that time?

Well, there's the fact that the U.S. population seems to be plain old resistant to using dollar coins. (For what it's worth, I'm for it: the dollar has dropped to coin-level worth some time since. England, for instance, uses a pound coin even though a pound is worth almost $2. But it's hardly one of my major concerns.) But the other factor apparently was that "limited Sacagawea quantities led to too many being stashed away by collectors, reducing circulation and thus familiarity." That's a pretty silly mistake: if you're going to roll out a new coin, do it right.

Anyway, we're up to take three here... except it's sort of like take three, four.... up to at least thirty-nine, and probably beyond. Borrowing an idea from their (apparently successful) "50-state" quarters, they are going to start releasing a coin for every U.S. President, in order, at four a year. 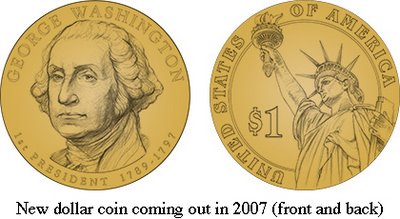 Or almost every President, I should say: U.S. law (quite properly and wisely) forbids the putting of any living person on currency. So, as of now, Ford, Carter, Bush 41, Clinton and Bush 43 are off-limits. Which is presumably why, if you examine the schedule, you see that the last currently announced coin is the 37th President, Richard Nixon, scheduled for roll-out in 2016. This is what drove boingboing batty: that "Richard 'Lying Scumbag' Nixon" is getting his face on a coin.

And while I certainly appreciate the accurate historical memory of Nixon as a lying scumbag, the truth is that far too many Presidents have been liars; and not a few have been scumbags. After all, when the current President finally goes to his eternal reward -- and if there is any justice in the universe*** he'll go from a jail cell to a far worse place -- he'll also presumably be stamped on a shiny new dollar, and then someone who -- astonishing as it is -- outdoes Nixon in both the "lying" and the "scumbag" departments.

No, what gets me is another thing. You see one President is going to have two different coins in the series with his shinny face on them.

I wouldn't really be surprised if some non-trivial proportion of my Noble Readers said Who?

Grover Cleveland comes from the list of Presidents between Lincoln and Roosevelt 26 (as opposed to Roosevelt 32, natch) -- in other words, the Presidents no one ever remembers -- largely deservedly so, really: they're a fairly undistinguished bunch all around, although you can make cases for the odd one here and there.****

But what distinguishes Grover Cleveland, in a one-of-these-things-is-not-like-the-others sort of way, from all the other Presidents, is that he served two nonconsecutive terms, 1885 - 1889 and 1893 - 1897.

Parenthetically, the reason he served two non-consecutive terms is the same reason that the current lying scumbag had the opportunity to toss our country down the toilet: the Electoral College. Cleveland actually won the popular vote in the 1888 election, just as he did in the 1884 and 1892 elections (thereby being one of only three men ever to win a plurality of the popular vote more than twice.*****) So to the Electoral College -- which has so many other negatives to its credit -- this minor irritation can also be ascribed.

In any event, once this occurred, the inevitable question occurred: how do we number Cleveland among the Presidents? 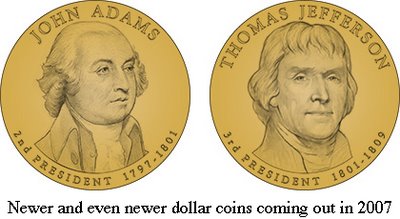 The first 23 are easy, Washington to Harrison (and how's that for a diminution?) But should Cleveland be simply the 22nd President, Harrison the 23rd -- with the quick-step to the 24th, William McKinley, interrupted by a brief return to the 22nd... or was Cleveland actually not only the 22nd, but also the 24th, President, with McKinley therefore actually the 25th?

Congress, leaping into action on important matters, officially declared****** that Grover Cleveland was both the 22nd and the 24th President.

Well, I think they blew it.

Obviously there is a good case to be made that Grover Cleveland was the perpetrator of both the 22nd and the 24th Presidencies. But honestly, when do we think about that?******* If you're going to think about that, you might as well talk about Presidential terms, which admittedly gets you instantly tangled up in fractions given the nine Presidential terms that were divided between two people,******** but still, they're more important.

And Grover Cleveland, say what you will about him, was one guy.

Here's the best argument against their position, though. If you say that Cleveland was just the 22nd (individual to hold the office of) President, you get the odd situation that the 22nd President was after as well as before the 23rd. But that is a localized oddity: it will only come up when you're thinking about the Presidents between Lincoln and Roosevelt 26. Which, let's face it, people hardly ever do, since they were an undistinguished bunch, as mentioned previously. But if you hold to the Official Position Of The United States Government and say that Cleveland was both the 22nd and the 24th President, then it comes up every time you think about any post-Harrison Presidential ranking, and you need to constantly include footnotes********** to the effect that Bush 43 might be the 43rd President, but there were still only 42 people to hold the office. It's a choice that instead of localizing the oddity -- an oddity that is, after all, real and odd but also local -- distributes from now until the end of time, the end of the Presidency as an institution, or the next time the Electoral College decides to fuck us in our collective ass, depending. In other words, given the choice they made, you get more oddities than you would otherwise.

Including not one but two dollar coins for Grover Cleveland.

And not because he deserves his own coin, like Lincoln on the penny, Jefferson on the nickel, Roosevelt 32 on the dime, Washington on the quarter or JFK on the half-dollar. But because... well. Because. 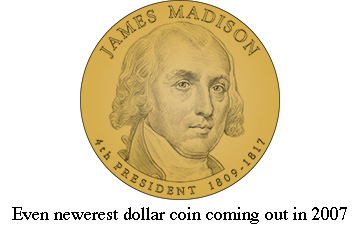 I readily admit that this is an issue on which intelligent people can disagree. In fact, it is pretty much a good candidate for the archetypal issue on which there is no "correct" decision. For instance, my beloved wife, who is usually right about everything, is wrong about disagrees with me about this.

But I think the localized-versus-distributed-oddity argument is a clincher, personally.

But Congress disagrees, so in 2012 we'll get two separate Grover Cleveland dollars. (Kevin Drum points out that 2012 will be a banner year all around for dollar coins, what with Chester Arthur and Benjamin Harrison joining Cleveland 22 and Cleveland 24 as their poster boys for the year.)

Otherwise, I have to say, the dollars look pretty well designed. They will be designed like Sacagawea dollars, so that the millions... er, thousands... well, all the machines that were re-designed to accept those will accept the new ones. And they will have three of the traditional inscriptions for coins -- the date, "E Pluribus Unum" and "In Ba'al We Trust"*********** -- on the coins' edges, which is frankly pretty cool. Anyway, I, for one, am looking forward to them.

But a lot of Presidents -- possibly a majority of those who weren't firmly in the lying scumbag category (and some who were in the "lying but not a scumbag" category) -- already have their faces on coins. It might be fun to put out a series of forty coins with other notable Americans on them, joining Alexander Hamilton, Benjamin Franklin, Susan B. Anthony and Sacagawea with non-Presidential currency portraits. Martin Luther King might be a good place to start, since today everyone either admires his work or has to pretend they do. *********** At any rate, it would be more fun than all forty-three of the forty-two men who have served as President of the United States.

But I suppose that ain't no ugly ass white man get his face on no legal motherfucking tender, 'cept he president.

And people other than white men -- particularly after the failure of the Anthony & Sacagawea dollars -- need not apply at all.

Update: Matthew Yglesias says that the mining lobby was the force behind the new coins.

______________________________
* I really hope I don't need to point out that Wallace, not D'Angelo, is correct here -- Alexander Hamilton never was President? (He was Secretary of the Treasury, and an important pre-Constitutional figure too.) For that matter, Benjamin Franklin, on the $100 bill, wasn't a President either (he died in 1791, during the first term of the first President, (who is currently gracing the $1 bill and the quarter.)) And it somehow seems typical of The Wire that they let the character who is wrong get the last word...

** Defined tautologically as those who actually know the information in question.

**** You can make a case for almost anything, really.

***** Andrew Jackson, who was cheated of the Presidency by a combination of the Electoral College and the odd constitutional procedures for when there isn't a majority within it in 1824 (and then went on to win outright in 1828 and 1832), and Roosevelt 32, who of course did so not thrice but in quadruplicate. §§

****** I've known this for years, but a brief Google doesn't turn up the actual date of Congress's important decision on this matter. And I don't care enough to do a prolonged Googling.

*********** What? Why would that bother you? It's just ceremonial Ba'alism, which, as everyone§§§§§ knows, is not any sort of violation of the first amendment. Really. The Supreme Court has said so. Would they ever get anything wrong?

§§ There really isn't another in the sequence "once, twice, thrice..." is there? Or am I just not thinking of it?

§§§ Which means that I probably made a mistake somewhere. So you'd better look it up yourself if you care. You're always safer looking things up. Well, depending where you look.