What's interesting about it, however, is that I don't think it's supposed to be. Or perhaps it'd be better to say: it's pretty somewhat despite itself.

Kevin Huizenga is a young up-and-coming cartoonist: Curses is, I believe, his first major book, although he's published individual issues with several publishers (the early ones of which being what's collected in Curses). One of my favorite works of his, "Time Traveling", is online, and if you like the page below (and haven't read it before), I urge you to check it out.

So last year, on the strength of many good reviews, the aforementioned "Time Traveling" and his general reputation as the greatest thing since sliced Crumb, I picked up Curses. I flipped through it before I read it -- I do that with graphic novels in a way I don't with prose, for better or for worse -- when my eye alighted on this page: 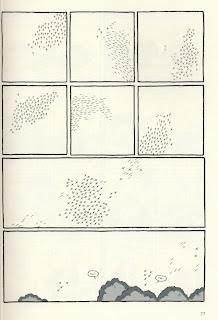 Page 77 is the seventh page of a ten-page story called "The Curse". It's about starlings, interweaving facts about them (such as their mimicry and Mozart's affection for a pet starling) with a small-scale human story about the irritation of the birds. Starlings, you see -- as we learn from Huizenga's piece -- are a European bird introduced to the U.S. by someone who was trying to ensure that all birds mentioned in Shakespeare were found here. Some lines in 1 Henry IV brought the starling to our shores. As a non-native species, they have grown extremely fast, and damage crops, other birds, even man-made structures. They are also a pest to humans: much of Huizenga's lovely little tale is about Glenn Ganges (Huizenga's recurring character) and his family being tormented by the droppings and (particularly) the sounds of the starlings.

Interwoven with this tale of environmental damage are repeated scenes of the damage from human habitation and suburban sprawl: the connection is repeatedly drawn between the damage we have done to the environment and that of the starlings (which is, after all, a consequence of human acts and thus adds to our column too). That starlings' mimicry means that many of their sounds are now mimicking human sounds -- in particular automobile sounds -- simply draws these themes closer together.

(One nice touch: on the penultimate page of the piece (page seventy-nine of Curses), Huizenga does a short homage to Robert Crumb's classic strip "A Short History of America", which I discussed in an earlier installment in this series: four panels carefully reproduced from Crumb's twelve, with the addition of an increasing number of Starlings, their calls (and some narrative captions). It's a marvelous intertextual (if that's the word) invocation of a classic history in order to place a new element within it, tying the human transformation of the environment (in a classic comics representation) in with the spread of the invasive species of birds.)

So this story is about environmental destruction, about helplessness as the blowback of interfering with nature comes to haunt us at all hours. Starlings dot every page of the work: they are a menacing presence, not unlike the biblical plague of frogs. Page 77 of Curses (page seven of "The Curse") is about Glenn Ganges's failed attempt to scare the starlings off with a bottle rocket his neighbor gives him: they leave for a brief moment, whirl about, and return. This page is the page of failure, a page about the intruding, unavoidable nature of an intensifying pest.

But God, it's beautiful.

Huizenga captures -- in a few simple lines -- a common, extraordinary, beautiful sight in nature: a huge flock of birds, swooping about the sky.

The cartooning here is extraordinarily simple -- almost as simple as cartooning can get* -- but it embodies an acute eye for realistic detail all the same.

Huizenga captures an extraordinary sense of motion -- of careening, fluid flying -- in his simple lines. Through the astonishing expedient of changing from crosses to v's to single lines, he injects a wonderful dynamism into his page, making you feel the birds change directions all together, as they seem to hang in the air (crosses), turn suddenly and swiftly downward (lines) or soar generally in the same direction (v's).

How amazing is it that such simple shapes -- which, individually, look not the least like a bird -- look so terribly realistic when collected altogether like that?

It's not just the precise placement of the "birds" in relation to each other that makes it so wonderful, nor the beautifully precise "timing" in his shifting from one shape to the next, capturing exactly the way in which it feels to watch flocks of birds sweep about the sky. It's also the placement within each panel. The shifting of the flock from the upper right, to the lower right -- and then, masterfully, leaving it there for another panel while shifting the direction of the flight by shifting the shapes used to draw the birds -- then shifting again to the upper (but not far upper, now all in frame) left, and then having it careen off panel to the left -- without the skill in these placements, the page wouldn't work at all. With them, the sheer poetry of the emotion is fixed onto the otherwise-motionless page.

Another masterful touch are the few birds going in a different direction in each of the top six panels: the three v's at the bottom left of the group of crosses in the first panel representing birds that are still going in a slightly different direction; a few crosses at the top right of the lines in the next panel representing birds that haven't turned yet, though are presumably about to. (While I'm at it, notice the changing directions of the lines in that panel: as your eye moves down the image, the lines go to a sharper and sharper angle, matching the increased speeds as the birds careen downwards.) There are a few such in each of the top six panels: and for the most part they are all down with an incredible eye. (The one exception, in my view, are two v's in the middle of the turning lines of panel four: they seem out of place, ill-considered. It always makes me think they'll crash into the other birds. Elsewhere the exceptions are placed in ways that seem to work beautifully; here, not quite.)

Then, to finish it off, the mixed lines and crosses in panels seven and eight convey powerfully the return, the medium-speed soar down to rest, again, in the trees from which they had been scared away. Here the lines add motion, the crosses slow it down: the mix works perfectly to make a statelier (and more inevitable) return than the swift, careening flying of the first six panels in which (almost) all the same shapes are used in every instance. The small numbers of lines in the final panel, of course, indicate that the starlings are mostly already at rest in the trees: whether the small lines you can see in the tops of the trees are starlings, or just part of the depiction of the trees themselves, is up to the individual reader.

The overall layout of the page is also extremely effective: with the tops of the trees grounding the bottom panel, the entire page becomes the sky, as we see the starlings fly up, wheel, and eventually settle back on the trees. The panel borders act as conveyors of time, showing us motion in the gutters; but the page as a whole also can be seen as a single (time-faceted) image of the sky.

One marvelous little technique which may escape the reader on this particular page: Huizenga denotes the cries of the starlings by -- generally -- meaningless lines in speech balloons. (Here you can see this only in the bottom panel, two single balloons, cries of two single starlings.) It's quite an effective technique for capturing the sense of spoken, palpable, but meaningless noise so utterly essential to the effect of the piece as a whole. It also allows him to incorporate fragments of more meaningful cries into an otherwise meaningless wall of sound -- a few notes from a Mozart opera, the "ding ding" of a train -- in a natural way that effectively captures the reality of bits and pieces of mimicry strewn through otherwise (so far as we know) mere noise. (At times he uses other techniques -- the sound of the city represented by an image in a speech balloon -- but not on this page.)

Coincidentally, this Sunday's NY Times Magazine, which came out as I was already deep in the process of writing this entry, has a brief article on starlings by Jonathan Rosen, accompanied by a photo essay with pictures by Richard Barnes. Rosen's piece is oddly (or not so oddly, given the similarity of the topic) congruent with Huizenga's comic, repeating many of the same facts (Shakespeare, Mozart) and even repeating the trope of thematically entangling the environmental damage of starlings and people. But I am grateful for the coincidence, for it happens that Rosen gives us a vital clue to the nature of this inappropriately beautiful page of Huizenga's. Rosen writes that "Barnes’s photographs capture the double nature of the birds — or at least the double nature of our relationship to them — recording the pointillist delicacy of the flock and something darker, almost sinister in the gathering mass."

Huizenga's "The Curse" focuses largely on the darker, sinister element of the birds; but page 77 captures the "pointillist delicacy" with remarkable accuracy. (Compare this page to Barnes's Murmur 7, Murmur 8 and Murmur 15; other Barnes photographs are more towards the sinister side.) In crafting a piece about starlings, Huizenga may have intended to focus largely, or even entirely, on their history, their irritation, and their sense of gathering, inescapable menace. But Huizenga is too precise, too accurate a cartoonist not to see the duality of their nature. Perhaps against his will, perhaps deliberately, page 77 captures another element of the starlings' being: their swooping, swirling breath-taking beauty. With extraordinary economy and grace -- with simple lines that a child could draw (but never would) -- Huizenga captures something essential about the world, about our experience of it (which is after all itself part of the world): sets it down in the most vivid way. Sometimes sheer simplicity is the greatest accuracy of all.

This year, for my work, I have an hour-long commute (each way) twice a week. The drive is mostly through rural areas, though: much of it through flat farmland where the sky is almost midwestern in its size and majesty. And I frequently see huge flocks of birds, rising up, arching out, v-ing back, dropping down. And ever since I saw Huizenga's page, it always makes me think of that. He so powerfully, so accurately captures it -- not the literal sight (if you look closely, in real life, you can really see the birds, of course, not just little marks; and the birds are not starlings, so far as I know), but the experience of it, that it has been hard for me to now experience the reality save through the lens of his art.

And that, Noble Readers, is the sign of a great page.

Tymmi, that's a neat link. Thanks.