In addition to Randall Jarrell, my other discovery* of this Increasingly-Inaccurately-Named Accidental Poetry Month™ has been John Hollander. I've mentioned browsed two of his anthologies (Committed to Memory, which is online (follow the links), and The Gazer's Spirit, which led me to this month's first Jarrell poem), and then -- reading in his anthologies having led me to read his poetry -- posted one of his poems from his Oulipian work Powers of Thirteen.

My next step was to the library -- which, in this case, was useless. So my next step was to order two of his books, which just arrived. One was his Selected Poetry (1993) -- which in addition to having samples from many of his books, has his Oulipian book Powers of Thirteen included in its entirety. But that I haven't yet had time to even dip into.

The other book of his which I ordered was one of the books which was not excerpted in Selected Poetry, but which I nevertheless was distinctly interested in reading: a book of concrete poetry he wrote called Types of Shape (the "new, expanded edition" of 1991).

Concrete poetry is poetry whose visual shape on the page is a crucial part of the poem.** The most famous shaped poem in the language (as Hollander notes in his introduction) is The Mouse's Tale from Alice in Wonderland. I hadn't read much of it before, but I was interested to see what Hollander did with it.

Well, as I said, I just got the book, and normally I'd wait a little while longer before posting any of it; but since Accidental Poetry Month™ is rushing to a close, I decided that I'd go ahead and post my two preliminary favorites -- chosen, note, before I've even read the entire book through (despite its including only 35 poems!). Maybe I'll like others more. But I definitely do like these -- more than enough to post them.

For the obvious reason, I'm putting these up as jpgs rather than as text. The title of the first one is "Kitty" (subtitled -- or described as -- "Black domestic shorthair"): 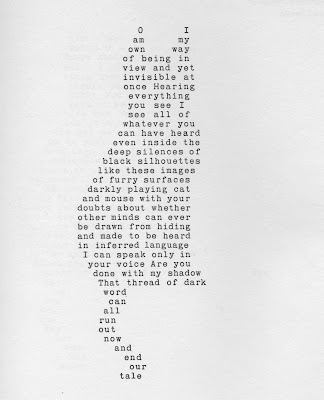 What I like about this -- indeed, about both of these -- is that they really work as poetry: the language is rich and interesting, and what is said is interesting too. Which is to say, it's not just about the form: it's also just plain good verse.

Here's the other, a companion piece (it seems), titled "Kitty and Bug" and subtitled (or described as) "Grey domestic shorthair and black beetle": 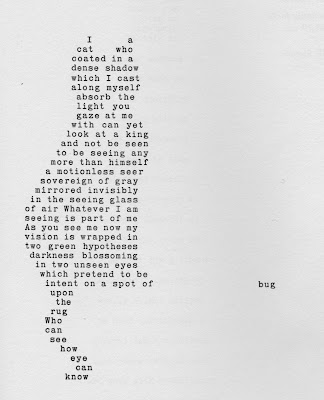 Do click through to see larger versions, by the way: the shapes are cute, but the words are actually worth reading -- and they're much more legible at the larger size.

I'll try to get around to reviewing the book properly once I've gotten around to reading it properly. But these instant discoveries seemed to me -- wonderful as they are -- things I was happy to post at once.

** The difficulty in laying it out, and the amount of sheer page space they require, are presumably two of the reasons why Types of Shape was not excerpted in the 1993 Selected Poetry -- along, perhaps, with the fact that a new edition had just recently come out.