And now here's a third helping of Randall Jarrell, who I've already posted three poems by this month.

I said in one of my earlier posts that I was seriously reading Randall Jarrell for the first time this month, but that is, in fact, not quite right: there is one book of his I'd read many times over: one of his children's books, The Bat Poet. I hadn't remembered, prior to my recent explorations, that Jarrell was its author (I knew it was a famous-but-not-all-that-famous poet, but no more); but the book itself I remember extremely well from multiple readings during my childhood. I will definitely read to my son when he's old enough.

(And I certainly didn't remember that The Bat Poet was illustrated by Maurice Sendak, most famous as the writer & illustrator of the all-time children's book classic Where the Wild Things Are.) 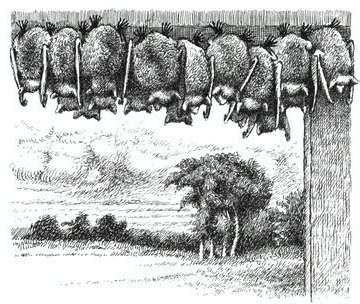 The Bat Poet is about a bat who tries to be a poet, but is misunderstood by all the other bats -- and by lots of other creatures, too. It's a charming and wonderful story. Here's a part from early in the story where the Bat Poet tries for the first time to recite one of his poems to the other bats:

At dawn, the sun shines like a million moons
And all the shadows are as bright as moonlight.
The birds begin to sing with all their might.
The world awakens and forgets the night.

The black-and-gray turns green-and-gold-and-blue.
The squirrels begin to--

But when he'd got this far the other bats just couldn't keep quiet any longer.

"The sun hurts," said one. "It hurts like getting something in your eyes.

That's right," said another. "And shadows are black -- how can a shadow be bright?"

Another one said: "What's green-and-gold-and-blue? When you say things like that we don't know what you mean."

"And it's just not real," the first one said. "When the sun rises the world goes to sleep."

"But go on," said one of the others. "We didn't mean to interrupt you."

The entire work is fabulous, and I recommend it unreservedly.

This week, however, I've been exploring the adult poetry of Jarrell; so here's yet another one -- another war poem (a genre he wrote much in). It's a less famous war poem than the one I posted last time. I think the general preface for the other might be justified -- that it might be a better poem overall -- but this poem has a few lines (the last few) which strike me as far more perfect, and far better, than anything in the other poem. But judge for yourself:

For wars his life and half a world away
The soldier sells his family and days.
He learns to fight for freedom and the State;
He sleeps with seven men within six feet.

He picks up matches and he cleans out plates;
Is lied to like a child, cursed like a beast.
They crop his head, his dog tags ring like sheep
As his stiff limbs shift wearily to sleep.

Recalled in dreams or letters, else forgot,
His life is smothered like a grave, with dirt;
And his dull torment mottles like a fly's
The lying amber of the histories.

That final line is just stunning, summing up something deep and important and true in a few perfect words.