I Find It Extraordinarily Depressing...

...that, despite the catastrophic and undeniable failure of conservatism over the past six and a half years (if not the past twelve and a half or, hell, twenty-six and a half years), that the best that the pathetic excuse for an opposition party can offer is a counterfeit withdrawal that will in fact extend the Iraqi occupation for years. Why can't these fools see that it is above all Iraq that has destroyed the credibility of the conservative movement -- and that now is the time to offer a full-throated defense of liberalism, not pathetic, cringing excuses for caving in to a failed presidency? And that to extend the occupation -- rather than bringing troops home as fast as is consistent with basic security -- is the way to make this the Democrats war as much as the Republican's?

Between this (which is going to be a bigger & bigger problem as we get closer to it being a real and not hypothetical issue) and the terrible cave-in on civil liberties this week it's hard to know what to do. I am a die-hard opponent of Naderism, on the grounds that third parties are simply structurally unsuited to American politics... but if at this moment none of the front-runners will actually stand up for ending the war and restoring the constitution, what hope is there for any change? What do we do? What can we possibly do that might work?

And a little voice in my head whispers: you're making the mistake that so many have made on Iraq since the war began: assuming that the existence of a problem implies the existence of a practical solution, to believe there is always something we can do, when sometimes there simply isn't....

I know, I know: to give up is a sure way to defeat; the one plan we know is useless is despair. But it's hard to know what to do. I am quite disappointed in Obama, from whom I expected better. I'll probably still vote for him, as the best realistic alternative to Clinton (who is quite clearly farther to the right and worse on almost every issue), but I must admit I am thinking of voting Kucinich just to vote for a genuinely anti-war candidate. I am torn between two true things: lesser-of-two-evilism promotes a slow slide to, well, evil; and protest votes are useless.

I am happy -- well, willing -- to fight the good fight in the face of terrible odds. But I wish I saw some tactic that at least had a prayer of working.

I wish that the opposition leaders were not so mired in the very failed thinking we want them to oppose. 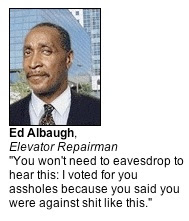 (from the newspaper that published the single article that summed up this decade before it happened.)

So what do we do now?