I just found out that one of the most famous birds in the world died last week. Alex was an African Grey Parrot who had been taught by Brandeis professor Irene Pepperberg for years. He knew more words than any other known bird, I believe (more than a hundred); Dr. Pepperberg believed he understood all sorts of abstract concepts, including that of zero. 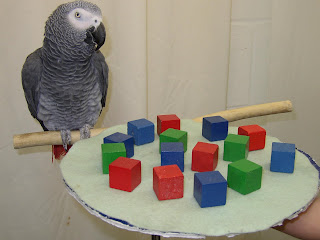 Dr. Pepperberg wrote a book based on her work with Alex called The Alex Studies: Cognitive and Communicative Abilities of Grey Parrots, published by Harvard University Press in 1999.

Alex died at the age of 31. He worked through the last week of his life -- "on compound words and hard-to-pronounce words" according to the NY Times obituary from today.

More Alex Links:
Alex's home page (with information about Dr. Pepperberg's research) is here.
Video of Alex (and Alan Alda) here. Really worth watching him in action (Alex, not Alda).
An older article about Alex from the Times can be found here.
Alex's Wikipedia page is here.
NPR Story about Alex's death is here.
An article by Dr. Pepperberg about her research with Alex is here.
(Update, 9/18) Alex's obituary in the L.A. Times is here. (via)
and the Boston Globe's article (not as obituary like as the NY or LA Times) about Alex's death & bird intelligence more broadly is here. (via)

Update: Just to be clear, I had not yet seen Grrlscientist's blogging about Alex when I chose the same picture that she did (I got it from here), and when I came up with the same final line as she did. Her posts are worth a visit, though (the former is her main post on the topic); Grrlscientist is a biologist, and even met Dr. Pepperberg, so actually, y'know, knows what she's talking about.
Posted by Stephen at 7:57 PM