Syllabus for American Studies 100: The History of American Culture

As I've alluded to, but haven't yet spelled out, this year I'm teaching two introductory-level American studies courses (both this semester and again next semester). The classes are American Studies 100: The History of American Culture, and American Studies 101: Myths and Paradoxes. Apart from the course titles and descriptions, I was given a pretty free hand. Of course, both preparing and teaching a new class are a lot of work -- and doing two, particularly in an area you haven't taught before (this is my first time teaching American Studies as such, although most of my history classes have been cross-listed and some have even been offered as 'concurrent' AS courses with the same title/number in a different department) is pretty nuts. And coming up with two introductions to one subject -- even with the direction provided by the course titles -- was yet another level of craziness. (The courses, by the way, had to be independent -- neither was a prerequisite for the other -- but also non-overlapping, as some people would take both (and majors were required to take both.))

It was a busy summer.

But I'm basically pleased with how the courses came out, at least for the first go-around (updates will be made before the spring versions, based on the first run). So I thought I'd post the syllabi in case anyone's interested. First up: Amst100. What I'm going to do is to put here, on the blog, the title page, the general information about the course, and the list of items (you'll know what that means when you get to it). Then I'll link to the complete syllabus as a pdf document on Google Docs for anyone who wants to read the details of the assignments, etc. So, without further ado... 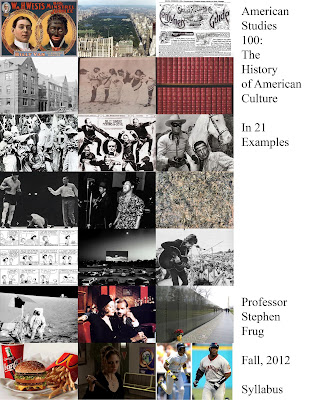 It's ridiculous, of course: you can't sum up American culture in fifteen weeks. We might as well all go home.

The approach of this class will be to work through examples: not precisely representative ones, since they don't represent the whole, but suggestive ones: ones that will introduce a lot of themes and issues that you will encounter again, should you go on to study American Culture further -- or just live in it. More specifically, we shall be talking about twenty-one things, where a "thing" can be a work of art, an event, a place, a genre, or any of a number of other more specific nouns. This is a history of American culture in twenty-one examples, the way we might have a history in five volumes, or in five minutes. Which is to say, it is limited by them, contained within them: they are meant to be, not complete, but informative.

Even apart from the limitations inherent in the example form, there have been a lot of other limitations involved in narrowing a culture down to fifteen class weeks. Two in particular are worth noting. First, our temporal focus shall be on the last hundred and fifty years -- mostly, indeed, the last hundred. American culture (depending on how you define it) goes back at least to the seventeenth century, if not before. But for the purposes of pedagogy, we will focus on the more immediate history of the culture we all live in.

Second, we shall take "culture" in a somewhat (but not extremely) narrow sense. The word is often used quite broadly, to include patterns of work, family, and such things. We will be talking about culture in a narrower sense: movies, television, paintings, food, memorials, sermons, sporting events, amusement parks, scandals, comics, cultural events, and so forth. But, of course, sometimes "culture" is used just to mean things like books, paintings and music. We will include those, but we'll go somewhat further than simply that.

The examples have been chosen with the hope of touching on many of the forms, modes, and issues which have been important in American culture, given those limitations. We will be touching on a lot of issues about which entire courses can be offered -- the history of American popular music, television, theater, film, painting, sports, comics, commercial culture, etc. (Indeed, you can take many of those classes here at Hobart and William Smith, should you be so inclined.) Thus we will be experiencing, of necessity, quick glances rather than long stares at these issues.

Nevertheless, we will cover a fairly broad ground. We'll be looking at two TV shows (and one TV event), one radio show (and one radio event) and one theatrical play. We'll be discussing one park, one historical monument and one amusement park. We'll talk about one painting and one comic strip. We'll do one unit on Jazz, and one on Folk and Rock music (specifically, their intersection). We'll talk about a preacher, a settlement house, a set of books, a type of movie theater, a type of food and a store catalog. We'll touch on sports twice, on public media events at least once and several controversies. We'll look at something from the Western genre, the Mystery/Noir genre, and the Fantasy/Science Fiction genre. Issues that will come up include race relations, commercialism, immigration, nativism, urbanism, suburbanism, cars and drugs.

It'll be a wild ride. We're going big, taking on too much, trying to do and have it all. After all, this is a course on American culture, ain't it?

If you want to read the complete syllabus, it is available as a pdf online here.

I love this format and concept. Thank you for sharing--you've really sparked my creativity for the upcoming semester!