Well, we know what they want. They want more for themselves and less for everybody else, but I'll tell you what they don’t want: they don’t want a population of citizens capable of critical thinking. They don’t want well informed, well educated people capable of critical thinking. They’re not interested in that. That doesn’t help them. That's against their interests. That's right. They don’t want people who are smart enough to sit around a kitchen table and think about how badly they’re getting fucked by a system that threw them overboard 30 fucking years ago. They don’t want that! You know what they want? They want obedient workers. Obedient workers, people who are just smart enough to run the machines and do the paperwork. And just dumb enough to passively accept all these increasingly shitty jobs with the lower pay, the longer hours, the reduced benefits, the end of overtime and vanishing pension that disappears the minute you go to collect it, and now they’re coming for your Social Security money. They want your retirement money. They want it back so they can give it to their criminal friends on Wall Street...

The table has tilted folks. The game is rigged. And nobody seems to notice. Nobody seems to care... It's called the American Dream because you have to be asleep to believe it.

• Diane Ravitch, Two Visions for Chicago’s Schools. (This, and many the links in this post, are from Ravitch's blog, which I again recommend to people interested in the strike.)

• The headline reads: "Director of Private School Where Rahm Sends His Kids Opposes Using Testing for Teacher Evaluations". Because Emanuel sends his kids to a good school, of course, where they know what good education is. Y'know, what Emanuel doesn't want for the kids who just go to public schools.

• Oh, and those charter schools that the Owners (to use Carlin's word) like so much? They just teach kids to past tests, which doesn't actually educate them; it doesn't even help them with other tests they don't specifically teach for). As Dean Baker put it, "If Emanuel is advocating increased use of charter schools he is either unfamiliar with recent research in education or has some motive other than improving student performance."

Education is no longer about information and learning skills. It's now about "triage." A few selected by standardized tests or privileged birth will be anointed and permitted into better and "gifted" schools....

So that's the program. An educational Katrina: squeeze the teachers until they strike, demolish their unions, and drown the students.

Chicago's classroom war is class war by another name.

A class war, it should be stressed, equally on the students and on teachers. On behalf of the Owners, who want Obedient Workers: the teachers now, the kids when they grow up.

• Susan Miligan points out that the so-called "accountability" that the so-called reformers are pushing through is ludicrous, unfair and wouldn't be done to any other profession. (She doesn't add that it's just as bad for kids as for teachers.)

• Jan Carr on how the point isn't just to make money for the 1%ers who write the tests (although it's that too), but making sure kids aren't taught critical thinking.

• Liza Featherstone (who I think I went to high school with, if she's who I think she is) on who's really hurting the kids.

• Sarah Jaffe calls out "liberal" pundits opposing the teachers. (via) But my favorite bit in the piece is this last quote from Dean Baker:

The main determinants of childrens' performance continues to be the socioeconomic conditions of their parents. Those unwilling to take the steps necessary to address the latter (e.g. promote full employment) are the ones who do not care about our children.

Poverty and inequality hurt kids the most -- including their education. The fantasy of mainstream liberals is that a good education can substitute for a decent society, so we can have opportunity without actually promoting social justice. But it's just false. Good schools depend on good societies. And we decided against having one of those a couple decades ago.

• Jersey Jazzman has a good sketch of what he calls the "narrative" of the teachers (which, as he says, also happens to be true) -- a counter-narrative to the "they're lazy and greedy and afraid of reform" bit that the mainstream media uses. (Link via; Jazzman's own follow-up here.) Here's the core of it:

In every country in the world, poverty impedes educational success. Our biggest education problem is that more of our kids are in poverty than any other developed nation. When America's public school teachers get kids who are well-fed and healthy and live in stable homes with parents who have good jobs, those kids do better in school than any other children in the world.

But a group of people who do not teach (or taught for a short while and not very well) have decided to blame teachers - teachers! - for all the problems in our country. They say that "choice" will save our schools, but the "choice" they offer is between underfunded, crumbling public schools and corporatized, autocratic charter schools that they admit they will never serve all children. These schools cherry-pick their students and then falsely claim they have the secret for success. Their inability to educate all students proves that public schools are not the problem - poverty is.

Why do these people sell this snake oil? Three reasons:

1) Many of them are looking to make money - a lot of money - off of education. They want to do to our schools what they did to our military, turning them into a bunch of Haliburton Highs.

2) They want to finally and completely break the unions. Once the teachers fall, it's all over for the middle class.

3) They need a scapegoat. Teachers didn't create these problems: the corporate titans of Wall Street did. These plutocrats are now paying a gang of carnival barkers a big bunch of money to blame teachers - teachers! - for the problems they themselves made.

Click through to read the rest for a version with supporting links, plus some additional commentary.

• So far as I can tell, Harold Meyerson's cri de coeur "If Labor Dies, What's Next?", with a publication date of September 13, was written before the strike -- it makes no reference to it -- but it's obviously quite relevant to the situation.

• Charles Pierce* has apparently been in Chicago today. I'm awaiting a longer piece from him; all we've got are these two brief 'uns so far. (And the latter is a bit cranky and unpolitic, I think.) But he gets the basic point well enough:

I am not flexible about this. If you want to look tough at the expense of public-school teachers, you are a snob or a coward, or perhaps both.... If I have to read one more smug, Ivy League writer from Slate talking, as the big strike goes on, about public-school teachers as though they were unruly hired help, I may hit someone with a fish.

* Note to self: Charles Peirce is the 19th century pragmatist philosopher; Charles Pierce is the contemporary political commentator. "Ei came before ie" is the obvious mnemonic here. Still, this pairing of worthwhile writers is not a dyslexic's best friend.

I have too much work to do, I can't keep doing this. But it does feel like the CTU is currently on the front lines of the class war against most of us. I'm not necessarily optimistic -- there are too many lies about them being told in the mass media. But I wish them the best, and hope they win. They have my admiration, my respect, my support, my solidarity. 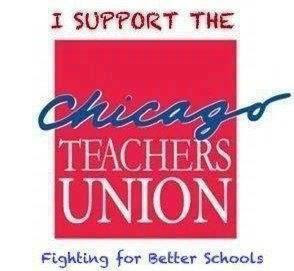 View my complete profile
* Read my graphic novel, Happenstance:
- in print
- or online
* Attempts has migrated to Substack; read new posts here.
* Stephen Who?
* Hey, is "Saperstein" new?
* Read (or draw!) an old comics script of mine
* Did you change the motto in your header?
* Snark and Boojum Press