Grant Morrison is widely regarded as one of the greatest of mainstream comics writers -- one of the few who might challenge Alan Moore for the slot of the single greatest mainstream comics writer ever. (Personally, I think Moore is clearly better; but Morrison is one of the few people for whom a case can be -- and often is is -- made.) Like Moore, Morrison has worked with many different artists in his career; but one of his most frequently collaborators has been Frank Quitely. Much of Morrison's best work has been with Quitely; indeed, comics scholar Geoff Klock has been recently arguing that in at least one case (Morrison's run on New X-Men) Morrison's work is variable in quality and is at its best with Quitely's collaboration. And the reverse is true too: Quitely, who is one of the very best mainstream comics artists working today, has done his best work with Morrison.

Morrison and Quitely's collaborations include (AFAIK this is a complete list (see update below)): Flex Mentallo (Morrison's sadly as-yet un-reprinted multiply metafictional masterpiece); JLA: Earth 2, a one-shot about the DC comics group; the very last issue of Morrison's long-running Vertigo series, The Invisibles; the currently ongoing series All-Star Superman; 10 issues of Morrison's 41-issue run on New X-Men; and, last but quite definitely not least, a short, three-issue series called We3, since published as a single graphic novel by Vertigo.

As that list indicates, Morrison often writes quite well-known superhero comics (Superman, X-Men, JLA); but We3, despite a few stylistic similarities, is not a superhero story: it's SF.* It's a story about three animals -- a dog, a cat and a rabbit -- who have been the subjects of an experiment to turn them into prototypes of a new sort of cyborg warrior. They are encased in battle armor, and they have been biologically altered in various ways -- for instance, their intelligence is enhanced, and they have (limited) speaking capabilities. And they are armed to the teeth. The graphic novel is about what happens when the three animals escape (with some assistance), and the agency responsible for their transformation goes after them.

As a story, We3 is comparatively straightforward, and is open to the charge of sentimentality about its animal protagonists. But it is extremely well told; grapples with the complex ethical issues of deadly warriors who are not themselves responsible for the fact that they are dangerous (and yet are no less dangerous for that); and, all in all, is a fun, gripping action-oriented SF story. Above all, in We3, Quitely's art is simply superb -- gorgeous, innovative and affecting. (Quitely's art is colored and digitally inked by Jamie Grant, who also deserves notice here. (The comic was lettered by Todd Klein, although I don't think we see an of his work in the page I'm going to discuss, as there isn't any dialog.))

The page I wish to discuss -- or pair of pages, if you prefer, since it is a two-page spread; but obviously it works as a single visual unit, and so I think it clearly counts as a page in some sense (including for the purposes of this series) -- is from an action sequence from early in issue 2,** in which the cyborg animals battle a team of soldiers who have been sent to hunt them down. Here's what it looks like: 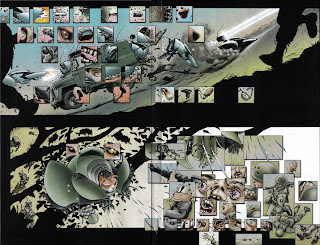 (image source; click for larger version)
The first impression from this two-page spread is of chaos: multiple fragmented panels, many overlapping; the superimposed figure of the cyborg dog on the top half of the page; the shifting viewpoints within the smaller panels. It's interesting, it's fresh; the question is, however, what's it doing? Is it just done differently to be cool?

There are, I believe, two possible interpretations of this page. Two pages before this sequence (#2, p. 4), one of the scientists responsible for changing the animals says of them "even their sense are different from ours. They're much faster than any human. They experience time and motion differently." So one might simply say that this is supposed to represent the view of the animals. But I don't think that's so. There's little in these pages to suggest that we are supposed to be seeing from the animals' viewpoint; in fact, in most views we're clearly not.

Rather, I think this page is a representation of the experience of battle: it's chaos, its speed, its gore and destructiveness and terror. And, yes, its excitement: even many soldiers who return from war disillusioned or as peace activists will admit to the power of the adrenaline surge that accompanies combat.

As it happens, the page is not quite as chaotic as it seems. If you take the time to read the sequence of panels carefully, you can see -- as Quitely himself says in this interview, "They actually do work in a sequence – there’re lots and lots there, so if you can be bothered, there’s stuff you can look at." The top row of what Quitely calls the "wee tiny" panels superimposed upon the larger one show, very clearly, the dog cyborg firing his built-in gun and a bullet hitting one of the soldiers in the eye. It's all in fragments: the tip of the weaponized limb, the bullet breaking the glass, a glob of blood. But it's perfectly comprehensible.

Similarly, all of the multiple, overlapping panels which are superimposed over the lower half of the page simply show the cat cyborg firing a bunch of spikes and piercing a few soldiers (you can tell its more than one because one has a beard and one does not), killing them quickly and terribly.) The fact that it's all in fragments, that the panels overlap and aren't in neat rows, is not simply visually striking (although it is that) -- not simply cool -- it also conveys something important: the experience of the battle. Superimposing multiple small panels over the large one give a sense of the speed of events that simply having them all in normal panel order would not (that would in fact make them seen drawn out, like slow-motion fights in films); having the panels overlap goes further and conveys the simultaneity (or near-simultaneity) of events. The partial images shown in the panels not only reflect the speed of events but also the fragmented comprehension that the men involved have of what is going on. Still, despite all of this, the sequence is comprehensible: if one takes the time (probably on a second or third reading) to slow down and put all the panels together, you can see that they make a coherent comics depiction of precisely what happens.

But, of course, that quote of Quitely's is followed by his line that "if you can’t be bothered, it’s simply carnage." And the point is that the page works on that level equally well. If you don't read all of the panels, you still get a key part of the experience, namely, the chaos and carnage and disorientation of a swift, deadly battle. The page represents the explosion of horror that happens the instant of the attack, erupting into the reader's view the moment the page is turned.

This is a great page because it is innovative comics: the shifting viewpoints, the reliance on what Scott McCloud would call aspect-to-aspect panel transition, the juxtaposition of small and large panels, etc, is all formally innovative (at least for Western comics: Morrison has said that part of what he was trying to do with We3 was to create "western manga", and certainly many of the techniques he and Quitely used had lots of precedent there (which is not to say that they didn't use them in innovative ways.)) But at the same time, the innovations are put to a crucial storytelling use: to conveying the nature of battle, the horror and the confusion and the excitement of it. This page (like much of We3) is an action sequence, solidly within the tradition thereof -- while at the same time being visually new and fresh (much like The Matrix in film). It takes an old idea -- a battle scene -- and makes it new again: closer to reality, more visually interesting, and still exciting. It can be read slowly, or glimpsed in an instant, and works at both speeds.

All of which makes it a great page. And if you like it, I suggest picking up a copy of We3, because chances are you'll like the rest of it too.

Update: Turns out that list of Morrison/Quitely collaborations was almost complete. Geoff Klock notes a Quitely interview where he mentions the one left off the list, a 9-page story called "New Toys" in Weird War Tales #3.

** I'd prefer to give its page number in the trade paperback, since that's how I read the series -- but the paperback has no page numbers, and it's simplier to just count pages within each chapter (issue). So it's issue #2, pages 6-7.
Posted by Stephen at 9:18 PM

Stephen: I like those two pages from we3, too. Quitely is a genius. I think that his collaboration with Mark Millar on The Authority was great. I have yet to read Quitely's Batman OGN.

I'm a little late commenting on this, but I agree wholeheartedly. It's one of the most amazing pages of comics I've ever seen, and one to show people who say Quitely's not a very good artist. This is pure mastery of the form, using some wild ideas to clearly present information while producing a visceral effect in the reader. Amazing stuff.

It's been a while since I read We3, but I was thinking much the same thing as you as I re-read the page here. And then I read the rest of your post, and you articulated my thoughts perfectly. Man, I wish I could do that. I'll keep working on it.

This is a favorite of mine as well -- I've taken to calling these "micropanels."

And you're doing very fine work with this project as a whole. Please keep it up!