Paul Chadwick's Concrete is an odd but wonderful series. Beginning with a superhero-style premise -- "man's brain is transplanted by aliens into super-strong, rock-like body!" -- Chadwick then abandons the feel and flavor of the superhero genre almost completely, trying to tell realistic stories of a man trapped in an ordinary but also in some ways crippling body. (The fact that the man has been basically castrated is a recurring issue in the series.) "Concrete", as the man styles himself, tries various methods of living within his newfound limits -- he tries being an extreme travel writer for a while (attempting to swim the ocean, climb Everest, that sort of thing); he works as a stuntman on a film; he gets involved with a radical environmental organization; and so forth. But Concrete is moody, reflective, self-questioning, filled with doubt, constantly revisiting decisions and wondering about aspects of the world.

In some ways, Concrete is the diametrical opposite to "realistic" comics such as those inspired by Frank Miller's The Dark Knight Returns running up through Warren Ellis's The Authority. In those "dark age" comics, the "realism" is largely about the degree of violence (to take the negative) and the complex politics of power (to cite the positive) that arise from the existence of superheroes. Some of these comics also show the extreme effects of the existence of superheroes on the world, as they transform its technology, its politics and its society. The superheroes are shown to be corrupt, lascivious, exalting in power in various unhealthy ways. Concrete, on the other hand, strives to have an effect on the world -- a former Senator's aide, he is particularly concerned with environmental issues -- but finds himself largely impotent and paralyzed. Rather than corrupt, he is clearly a literary descendent of Hamlet's paralysis in the face of corruption, and self-questioning in the face of a complex and mysterious forces (political more than metaphysical in Concrete's case). While at times he enjoys his body's prowess, he is more often hampered by it in depressing, embarrassing or painful ways.

As I mentioned, it's a terrific comic. Originally appearing in a panoply of anthologies, mini-series and collections, it has now been released (just about) complete in seven matching trade paperbacks from Dark Horse.*

In addition to the (by my count) thirty-six full-length comics that Concrete has appeared in, he has also starred in many shorter works, ranging from one or two pages to twelve or so. (These too are collected in the new matching trades.) Some of these shorter stories are among the finest Concrete stories: often even less "eventful" then the longer tales, they are beautifully done, evocative, poetic in their effect.

One of my favorites of these short stories is "Stay Tuned for Pearl Harbor", an eight-page story originally published in 1989 and (in the most recent series) collected in the trade paperback Concrete Volume 5: Think Like a Mountain. The longer story that forms the bulk of that collection, Think Like a Mountain, is the story of Concrete's brief entanglement with the radical environmental group Earth First!, and the extra short stories included are largely ones with an environmental focus. (As mentioned, environmental issues are a recurring theme in the series.)

In "Stay Tuned for Pearl Harbor" Concrete is traveling with two of his companions, Larry, a struggling freelance writer whom Concrete hired to be a secretary and general aide, and Maureen, a biologist who has been assigned as the primary researcher into Concrete's physiology (since his body was constructed by aliens, it isn't well understood). Since Concrete is so heavy, he can't travel in a normal car, so he rides in the back of a pick-up truck as Larry and Maureen travel in the cabin.

In this story, Concrete and Larry get involved in a political discussion about the barriers to environmental reform while Maureen, riding shotgun, looks out the window and goes into a reverie (usually Concrete's role, although not in this tale) about the way we perceive the environment based on the terrain they are passing through. The two aspects -- the dialogue and the reverie -- work really well together, forming a very effective fugue structure and playing off each other in various ways. (The title, incidentally, relates to the possibility of a disaster promoting environmental reform; as Concrete says on page five, "We'll wake up eventually. We'll have to. We just need an environmental Pearl Harbor." These days, after Katrina's destruction of New Orleans has failed to produce any significant environmental policy changes, one wonders if even that will be enough. Or perhaps that's just the environmental equivalent of Hitler remilitarizing the Rhineland, and Pearl Harbor still awaits.)

On the second page, the conversation recedes into the background -- you can still see it going on as Concrete, pictured in the bottom right-hand corner of the page, talks to Larry through the back window of the pickup truck -- as Maureen's reverie, previously the minor element, comes to the fore and dominates the page. Here's what it looks like: 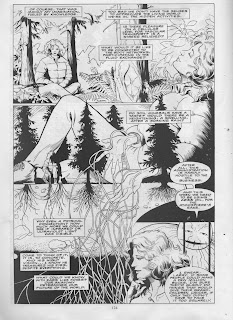 (Click for larger version)
Maureen here is imagining (or beginning to -- it continues over the next several pages) how we'd react to the environment if our senses were able to really plug into the natural world. This of course plays off Concrete's complaints about our deliberate ignorance ("If some people could make a few million bucks, I'm sure they'd do things that would give their grandchildren cancer, if only they didn't have to face it too squarely.") Maureen is thinking about what "face it squarely" actually means -- how intellectual knowledge pales next to the visceral knowledge that comes from the senses.

But it's the layout of the page that makes it really sing. Maureen imagines her fingers becoming roots, and mingling with the roots of trees portrayed at a different scale. There, by her foot, another Maureen crouches, her face dark, her hands turning into roots themselves. The page as a whole is structured by the layers of an ecosystem, with the second tier being trees above ground, and the third one being underground, where the tree's roots (and Maureen's imagined roots) mingle. The top layer of course is the ecosystem in greater detail, so that we can see the bugs and the details of the leaves, and Maureen sitting -- still just imagining from knowledge, rather than (imagining being able to) directly experience -- in the upper-left-hand corner. But note the way the light lines of the leaves in the upper-right so closely resemble the lines used to draw the face on the giant Maureen figure (stretching up into the detailed world just as her roots stretch down): the same type of lines are used, and her hair seems to be just another part of the leafy plants they are next to.

Then, at the bottom, we see the night sky (they are traveling at night) -- a wonderful reversal, partly done just to make the balance of blacks on the page work no doubt, but also working in lots of thematic ways as well -- working, for example, as just another layer, since of course the rocks shown above ultimately "rest" on nothing but empty space. And in the lower-right hand corner, the small image from the present grounds the page's fantasy: Maureen is daydreaming, Concrete speaking. Note also how the shape of the stars just above Concrete's head curve gently in such a way as to match the curve of Concrete's own shoulder -- there is almost a ghost-concrete visible in the bottom right-hand corner of the page, with his head formed by the speech balloon of the (visible) Concrete.

And none of this would mean a damn if the whole page wasn't so extraordinarily well balanced, so gracefully composed -- but it is, and so the larger ecosystem of the page serves to balance out the individual visual and textual elements to make a strong, graceful whole.

I picked this page, of course, because it's extraordinary -- and it is. But even after writing this entire post, I almost junked it several times -- simply because I kept running into so many other wonderful pages from Chadwick's Concrete that I thought maybe I should use instead. Inertia trumped: and I am by no means certain that this isn't the best example. I'm just equally uncertain that it is. The point is that Chadwick routinely does wonderful pages, and there were many others (several from this story, several more from his remarkable swim across the sea, and on and on) that I seriously considered using. Chadwick is an artist who clearly gives a lot of thought not simply to creating great art but also to composing great pages.

And Chadwick's gorgeously laid-out pages with their graceful, careful drawing serves to perfectly complement his thoughtful, contemplative writing. If you haven't already, I highly recommend checking the series out. And if you have read it before, take it down, flip through a book, and marvel at Chadwick's sheer ability at page design.

_____________________________________
* Although for those of us who had gotten some but no all of the earlier Concrete volumes there is the familiar problem with comics -- is it me or do other fields just not do this as much? -- of the material's rearrangement leaving one forced to decide between buying books one half or three-quarters owns or missing various stories. Frustrating. But for those of you starting out, the new volumes are well-organized and well done.
Posted by Stephen at 5:51 PM

Man, you're so right about Chadwick's ability to lay out a page. Some of those pages in Concrete are downright incredible. Off the top of my head, I remember some from Think Like a Mountain in which Concrete is contemplating man's effect on the planet, and he imagines a huge half-man/half-woman holding a giant chainsaw made of airplane and factory parts. It's breathtaking.

I've only read the series in the digest editions (most of it, that is; I still have to pick up volumes 4 and 6), which are black and white; I know some of them, including Think Like a Mountain were originally in color, which probably made them even more beautiful.

Commenter thewalker tipped me to this wonderful essay.

Naturally, I enjoy complimentary reviews, but in this case the level of discourse, sense of context, and even word choice indicate there's a lot of iceberg under this tip.

Thanks much for pointing thoughtful people my way.

Paul Chadwick: Welcome to Attempts! I'm honored and delighted you liked my post.

Thewalker: thank you for pointing PC this way. And thank you for your comment! I definitely agree Chadwick's work deserves a lot more attention.

(And thanks always to Matt Brady for the supportive comments! You're definitely right that those pages from Think Like a Mountain are terrific -- clearly thematically connected to the page I discuss here: in essence, it's Concrete doing what Maureen does in this story, imagining viscerally reacting with the environment. Incidentally, you can still find Think Like a Mountain's color edition -- I'm pretty sure I just saw it the other day in Comic Relief in Berkeley -- but of course you loose out on the short-shorts that are included in the recent reprints. Always trade-offs!)