Quoth the Rabbi (via):

Religiously speaking, this is the belief that God gave freedom to all people made in His image, and that those who oppose freedom must be prepared to fight God.... It’s obvious to me that movies and comic books can make this case better than any subtle novel and more authentically than any spin-tested political speech. Comic books, and the graphic novels that evolved from them, are about the struggle of good against evil. Other art forms can make the claim that everything is gray, nothing is true, and nothing eternal. Of course these latter claims may be right, but if they are, then the age of heroes is over...

Hmm, yes, the struggle against good and evil! Those who fight freedom fight God! The message of Graphic Novels! Yes of course. Like, for instance, this one: 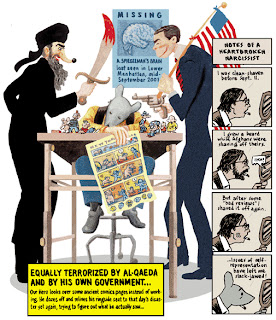 Er, well, no, I guess not that one. Here's another! 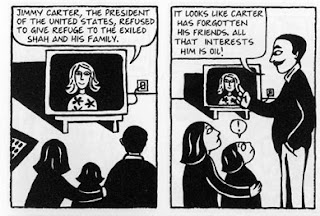 Er, maybe not that one either. But surely this --

No, well, I guess not his comics either.

Maybe the Rabbi is reading the wrong comic books.