Covering Cerebus, Part Seven: In Which Covers are Discussed Apart from Their Contents

Part seven of a series. The earlier parts are here: one, two, three, four, five, six; and an index entry for the entire series can be found here.

One of the reasons I was surprised that I was unable to get into Guys (as I discussed in the previous installment) is that the covers are so wonderful. The majority of the covers to Guys (which collects issues #201-219) are pages of comics -- something that has certainly been done before, but which I always like. In fact, the pages are so integral to the comic that the covers to #202-213 are included in the phonebook collection, albeit in black and white versions. This is the only time that Sim includes the covers in his compilations. Anyway, here's what some of them look like: 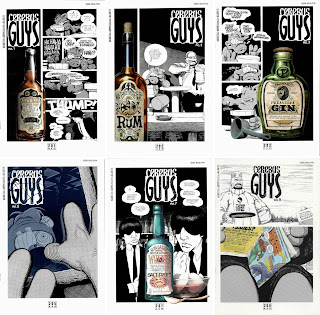 The covers are, as I said, pages of comics -- but not quite just pages of comics. Guys takes place in a bar, and in many of them Sim works a different bottle of liquor into each composition. It is elegantly and stylishly done, and, so far as I'm concerned, simply makes the covers all that much better.

Note that some of the covers are more like single panels than actual comics pages -- the cover to #205 (bottom left) is an example of this. Nor do all of them contain liquor bottles -- such as the bottom right cover (to issue #209), which shows one of the bar denizens, plus Cerebus reading a comic. But (I believe) they all serve as part of the story. The one on the bottom left, incidentally, is a good example of one of the nice features about this set of covers, namely, the mix of black and white and color. The "comics" part are in black and white (presumably since it is part of the story, and the interiors are all black and white), but other elements -- often the liquor bottles -- are in color. In the cover to #209, of course, it is the comic Cerebus is reading which is in color -- a way of showing its fascination and power. Its an effective technique.

One of these covers I want to point out particularly is the cover to issue #212: 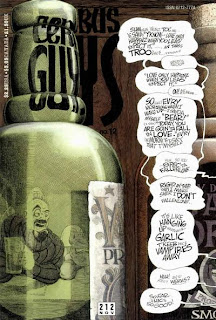 Like many of the Guys covers, it is a comics page (in this case, a one-panel page) with a liquor bottle (in this case two) on the cover. We see Sim's extremely expressive lettering as two of the characters talk off-panel. But not entirely off-panel, since we also see them reflected in the liquor bottle (on the left). Further, the logo itself is half bent around the bottle, half projected on the wall behind it. The overall effect is wonderful -- a good example, really, of Sim's marvelous page design.

Later in the Guys storyline, Sim stops using the covers as comics pages (which is presumably why he doesn't include the later ones.) He uses a variety of images -- presumably miscellaneous scenes from the story. My favorites are the covers to #214-215, which are Andy Warhol pastiches: 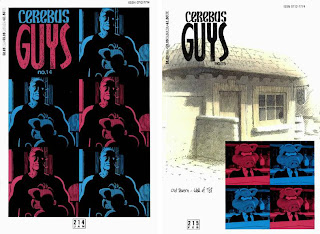 -- in the latter case combined very effectively with a more muted picture of the outside of the bar.

The storyline after Guys is Rick's Story which, I believe, still takes place in a tavern (as with all the issues discussed in this post, I haven't read 'em, although in many cases I've read a bit about 'em.) The central visual motif in the covers for the Rick's Story storyline is the name sign hanging outside a tavern.

Sounds simple. But Sim does wonderful things with it. Usually, he has the sign (viewed from a direct angle) contain the "Rick's Story" logo, while a signed-shape image, projected against a colored background, contains an image from (presumably) the story inside. Look at these:

In the first one (on the left, #220) you have to look twice to see that the image is, in fact, shaped as another tavern sign; but it's true in all three cases.

In two of the covers, the image breaks out of the tavern sign shape: 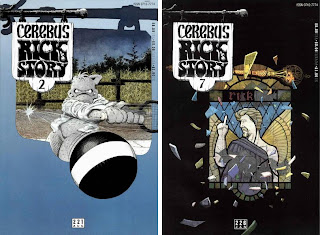 In a few other cases, the single-colored background has a line drawing inlaid upon it, with a full-color sign dangling before it:

Note that in the cover to issue #224 (center), that is just a sign-shaped image: it's just that a 'panel' is highlighted (through different colorization, plus a border) within that image. Also note the continued religious motif, particularly in the cover to #225 (right).

Finally, in the final four covers in the storyline, the image and the text reverse places: the image is in the straight-on, standard-shaped tavern sign, while the logo is visible in the larger, sign-shaped image that dominates rest of the cover -- at least, it's initially visible: it's increasingly obscures a, over the course of the four, Sim zooms in upon it. Together it produces a truly wonderful series: 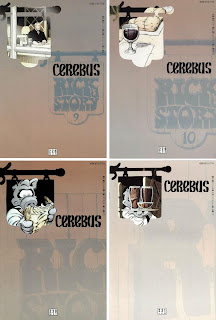 Following Rick's Story was a thirty-four issue storyline called "Going Home", eventually collected in two volumes, Going Home and Form and Void. These thirty-four issues have, perhaps, the greatest stylistic unity of any Cerebus storyline: all thirty-four covers are photographs -- taken by Gerhard, I believe, although I'm not sure about that -- a series of splendid nature scenes, presumably to accompany the journey motif implied by the title. In some cases the photographs include some building exteriors; in one or two cases they are photographs just of building exteriors. But they are all clearly of a piece: and most of them are spectacularly beautiful. While these aren't the first photographs to be used on Cerebus covers (there were the lunar photographs used towards the end of the "Church and State" storyline, and the photographic cover of issue #138), they certainly stand out -- from other Cerebus covers and from other comics covers in general.

I don't have much more to say about them; you can go take a look at them if you like; but here are a few that I personally liked a lot: 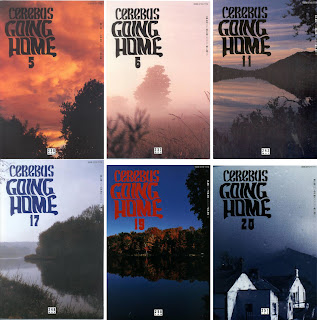 Truly amazing, I think. Richard Misrach, eat your heart out!

And aw heck, I can't resist, here are some more: 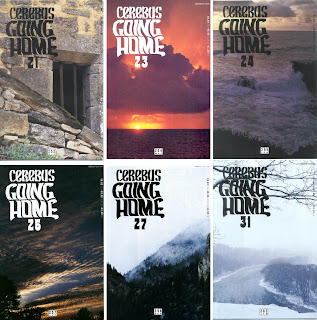 Now we come to the final Cerebus storyline, "Latter Days", which was reprinted in (the final) two phonebooks, Latter Days and The Last Day. The opening dozen or so covers are formed on the following pattern: each contains an image (usually a single image, often a photograph); a picture of Cerebus, usually in a costume of some sort; and a prominently displayed-title, using (to varying degrees) archaic diction in imitation of language associated with religious texts. Here are a few examples: 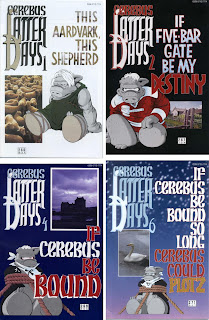 -- Not my favorite Cerebus covers ever, although the cover to issue #271 (bottom right) shows that Sim still retained his sense of humor.

As the storyline goes on, Sim varies the formula. On the cover to issue #272, for instance, the caption is left out; but we get this wonderful portrait of Cerebus as a rabbi (!): 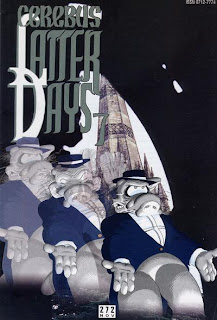 And on the cover to issues #275-277, the background image fills the cover, as (in front) Cerebus dons the costume of Charlie Brown, another wonderful parody: 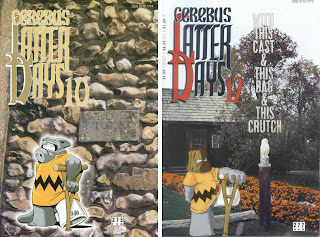 One of my favorites of this sequence is the cover to issue #274: 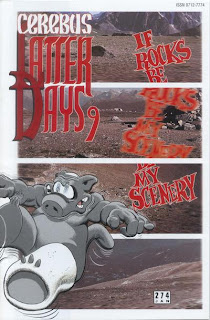 It's still the same basic formula -- Cerebus figure, archaically-phrased title, and picture: but the multiple pictures make it almost comics, and the title is hidden off-panel in places, with one version if it trembling (from Cerebus's fall) -- a cover that manages to be quite funny within the same parameters as the other covers in the sequence, and even to give a real hint of one aspect of the plot (since we see Cerebus on a crutch later on, presumably the fall actually hurts him...)

Issues #282 - #290 are a sequence known as "Chasing YHWH", in which (if the internet is to be believed) Sim presents a long, eccentric interpretation of Genesis (a sequence that convinced Paul O'Brien that Sim had fully lost his mind, even apart from his ongoing misogyny). Save for the first, the covers are all mock-ups of movie posters, as if each issue were a further sequel in a series of films. Here are a few examples: 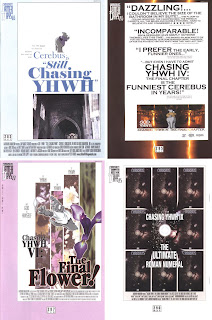 Pretty basic in concept, although (as always) very well done. And a few of them are fairly funny (you can't quite read all the writing in the images I could find, alas, but even from what I can make out it's clearly true), such as blurbs on the cover of issue #285, which include the self-mocking quote "I prefer the earlier, funnier ones," as well as some hotel reviews.

Lastly -- but hardly least -- we get to Cerebus's last day. The covers all portray Cerebus as a very old man, tottering about in the room where he spends the eponymous day. In fact, if you line them up, they form a continuous picture of the room, with Cerebus as a superimposed figure tottering across it:

Go ahead and click that to enlarge it -- it's a lovely sequence, quite beautiful in a quiet, restrained sort of way. Worth seeing at a size that you can really see. (I got the combined image from this site.)

You'll notice that the cover to issue #298 was left out of that sequence; that's because rather than showing the next part of the room, it forms a pair with #297 to show an aged Cerebus in bed as the room grows dark: 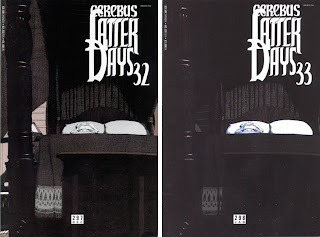 Again, a very subtly beautiful effect, as the dark closes in around Cerebus's life.

And, finally, the cover to issue #300 shows the area portrayed on the cover of #299 flooded with the light seen by the dying Cerebus -- 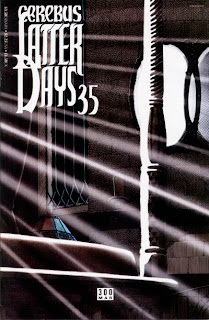 -- a light which, judging by what I've read online, is much more ambiguous in its meanings and implications than it might appear.

And that, at last, concludes my survey of Cerebus covers. I think I'll (probably) put up an eighth and final post with some concluding thoughts about Cerebus, so keep an eye out for it. But I hope you've gotten a sense of the sheer visual creativity and power of Sim's work from these covers. For myself, I am struck by the sheer variety of them. Just look at the ones I've dealt with in this post alone!

And that's to say nothing of the various ways in which he relates particular covers together, parallels that tie smaller or larger sequences together, and so forth. Sim's use of the comics medium was always profoundly creative, exploring and pushing its boundaries; and -- as I hope I have shown -- that was true in his covers to Cerebus no less than in the comics within it.

The eighth and final post is now online here.
(Index to the entire series is here.)

I usually comment on these posts in some way, mostly to reiterate that I've enjoyed the series, but I had to mention that this selection of covers really makes me interested in the contents of the books. Someday I'll try to read as much of Cerebus as I can (we'll see how far I make it before I bail), but I hope I can make it this far, because some of these are truly amazing.

Oh, and I also wanted to mention that the early "Latter Days" covers also seem to be referencing Stan Lee and Jack Kirby's work on Fantastic Four, which had stories with titles like "This Man, This Monster". I'm not sure if that's exactly what Sim was going for, but that's what it made me think of.