Part six of a series. The earlier parts are here: part one, part two, part three, part four, part five. Links to the entire series can also be found here.

I have come to the third quarter of the "Mothers and Daughters" storyline, collected in the phonebook entitled Reads (containing issues #175-186). This is the phonebook that is about evenly divided between actual comics and Sim's prose. Each issue of the original comic was half-prose and half-comics; and the phonebook reproduces this format so that you get a few pages of one, followed by a few pages of the other. The first group of the prose selections are formatted the way that the dominant popular publication in Cerebus's world (known as "reads") are: prose and single illustrations appearing on facing pages. The second group are simply Sim's prose. And while I read all of the earlier text sections that appeared in the first eight volumes of Cerebus (not as predominant as they are in Reads, but there are some, particularly in Jaka's Story), I should make it clear that I skipped the majority of the prose sections here. (There are summaries of them online here, here and here.) The comics sections are, I think, comparable in quality to the rest of the "Mothers and Daughters" storyline, although the extended fight scene which more-or-less makes up the second half of the (comics sections of) the book is rather excessively drawn out, wonderfully drawn though it may be.

On to the covers.

The covers to the Reads sub-storyline are stylistically all of a piece, with a single image centered on a patterned background. "Reads" are, as I mentioned, the (a?) dominant publication in Cerebus's world, and they covers for the Cerebus issues are formatted the way the (fictional) reads' covers are in the story. (We see several pictures of them, on newsstands and so forth, with covers in this same format.) So for this storyline Sim formats his actual covers the way the fictional (reads) covers are formatted. This is particularly clear from the first issue of the sequence, #175, titled "reads" and showing further "reads" in its sole image: 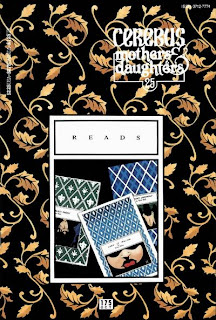 Overall, the Reads covers are nice enough -- stylish, if not overwhelming. Here are a few more to give you the idea: 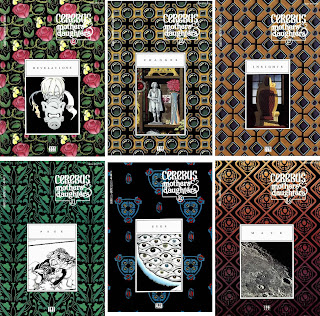 There are two particularly noteworthy ones here. First, notice the cover to #181 (bottom left), where the interior image itself is unfinished, simply a piece of a comics-page in progress; this is from a page in this issue in which we see Dave Sim himself creating a page of Cerebus -- marking the beginning of a metafictional motif which (very briefly) begins in this phonebook and which (far more prominently) continues in the next.

Second, the cover to #186 (bottom right), as well as #185 (not shown) are photographs of the moon -- deliberately echoing the covers from issues #105 - 108, since a similar religious journey is begun in these issues -- although of course the photographs this time are incorporated into the general 'reads' style.

The only one that departs significantly from the "reads" pattern is the cover to issue #184: 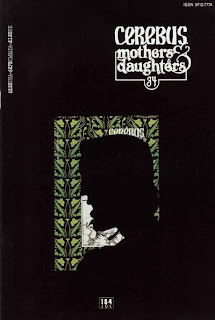 Here the background pattern is sheer-black; the internal rectangular image is itself a fully-formed reads-style cover -- except that it is blocked by a silhouette. A nice variation.

Now I'll move on to the covers of the last quarter of the "Mothers and Daughters" storyline, the part collected in the phonebook Minds (containing issues #187-200). Unfortunately, while the actual contents of Minds are as stunning as anything in the entire Cerebus storyline, the covers, quite frankly, are not: the majority of the covers to these fourteen issues are marred by a piece of promotional advertising.

The first three Minds covers are illustrations of the ongoing religious journey (through, or at least symbolized by, outer space) that Cerebus is on:

Perfectly ordinary, albeit well-done, illustrations. But then, for the next three issues, we get this:

Still we're illustrating the journey... but now there's the black banner promoting the "Cerebus World Tour" (a signing trip that Sim took, I believe) taking up a third of each cover, and making the aesthetics of the whole distinctly... less.

And these continue for (almost) all the rest of the Minds covers.

Now, the illustrated parts of those covers are nice -- some illustrate moments from Cerebus's ongoing religious journey, others are images derived from visions he is granted of what his future might be like; but as overall covers, as aesthetic objects, they're lessened.

I guess I understand why Sim did this: he didn't seem to think of the covers as part of the essential aesthetics of the series, as indicated by the fact that he didn't include them in the phonebook collections (with one minor exception that I'll get to later). But since in my opinion (as you've no doubt gathered) they are wonderful aesthetic objects, I think it's a pity that he marred this particular year-or-so's worth of covers with an ad.

The last of these is on issue #199, and for the 200th issue of Cerebus we get another cosmic image, a fitting one with which to illustrate the end of his religious journeying: 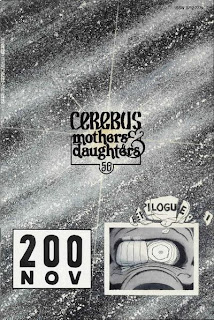 And that's the end of the "Mothers and Daughters" storyline.

And, rather to my surprise, that's as far as I've read in Cerebus.

I have Guys, the eleventh phonebook in the Cerebus series. It's on the table, right over there. I picked it up yesterday, and again last night, and read a little bit. But I can't quite get into it.

I'm not sure why. I don't think it's the book itself -- at least, people whose taste I respect like it a lot, and I can't really say that I've seen anything in the book that would put me off. I've really enjoyed the series up until now -- even the notorious ninth volume, Reads, is perfectly fine if you skip the (lunatic and misogynistic) prose and just read the half that's comics. And the opening to volume 11 doesn't seem all that different, frankly. In fact, it's sort of a return to the earlier, humorous mode of the first few volumes of the series. So it should be a welcome change of pace.

But for some reason, it's not grabbing me.

I guess that, for now -- for whatever reason -- I'm done with Cerebus. I began reading it, more or less, on a whim; and now I'll let myself stop the same way. I've read 2/3 of the run (yes, including the uncollected early issues: I finally got a copy of Issue #0 and read them too), and maybe that's enough. Or maybe not: I still have the book, and maybe one day I'll feel like reading it. Until then --

Just about everybody bails on Cerebus. I guess this is where I bail.