The Weirdest Book in the World is (Temporarily?) Online

Via Eddie Campbell, I see that Italian artist Luigi Serafini's Codex Seraphinianus has been posted, in its entirety, as a series of flickr images.* The Codex Seraphinianus presents as an Encyclopedia from an alien culture -- written entirely in an invented script (nonsense, or possibly a whole invented language -- I don't think that anyone knows), with images, charts, etc. It's as if an actual alien artifact was simply dropped into our world.

I've read about it many times before, but I've never actually read it previously -- only a handful of sample pages that various online sites (see links earlier in this sentence) have. (Is "read" really the operative verb here? I'm emphatic in my belief that one "reads" even wordless comics, but I'm not sure if it applies to the Codex.) The reason, straightforwardly, is that the book is extraordinarily expensive -- many hundreds of dollars for most editions -- and hard to find in libraries (Cornell has one, but they keep it in their "rare book and manuscript" archives so you can't actually check it out). But now, hey presto, it's online.

Just so you get a sense of what I'm talking about, here's a page which is (I believe) reasonably representative of the idea -- page 31: 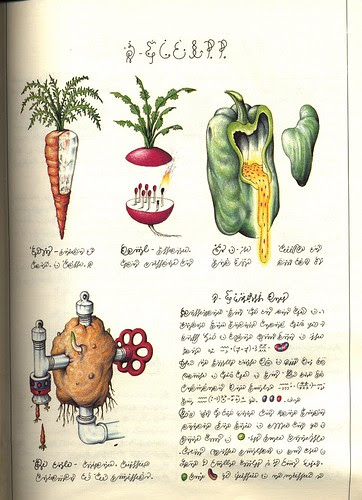 It's an extraordinary artistic creation -- a piece of art that really fits into no medium that I know of (I guess "artist's books" is the closest I can think of), one so weird that one hardly knows how to approach it. But that's exactly why it's cool.

But given our current era of The Copyright Wars™, Lord knows how long it'll stay online, though, so if you're at all interested I strongly recommend you go check it out sooner rather than later.

Postscript: ... Okay, in one sense the title of this blog post is untrue: the Codex Seraphinianus is online, but it isn't the weirdest book in the world. At best it's the second weirdest. The weirdest book in the world is probably the Voynich Manuscript -- which I believe was an inspiration for the Codex, although I'm not sure about that -- which is a lot like the Codex, except that in the case of the Voynich no one knows who created it, which frankly makes it even weirder. I mean, ultimately, we know that the Codex is an artist's project. The Voynich manuscript may be one... or it may be a real encyclopedia in some sort of code... or it may be something else. We don't know. From what I've seen of it, it's not quite as beautiful as the Codex, but it's almost certainly weirder. (On the other hand, it too is online -- see the last link on this page for more info, since it's not as simple as just a Flickr set -- so I guess the blog post title is true either way.) Update: Via BoingBoing, the Voynich manuscript is now also available as a Flickr set. I haven't looked carefully, but it definitely doesn't look as cool as the Codex based on a quick glance. BoingBoing also notes a new statistical analysis indicating that the Voynich manuscript may be a hoax.

Update: I've written another post about the Codex which you can find here.